Have you ever been told a story, whether it be a tale of grandeur or something simple and more mundane, and wondered, where on Earth did this story even begin? Where The Water Tastes Like Wine, by developers Dim Bulb Games and Serenity Forge, gives players a kind of insight on how stories can begin as simple seedlings that grow to large overpowering vines that grip a whole nation’s heart or be as simple as a rose bush; shared and treasured in smaller areas. I’ll be honest, I didn’t know much about this game going in. As the game was installing, I began to watch the trailers, and I found myself completely enamored with the narrative. I could not wait to begin.

You play as a wanderer, traveling across a Depression Era America with nothing more than the clothes on your back and a few coins. You stumble across a local pub and find a table where others are playing cards. You examine the players and figure why not jump in for a bit of fun? Perhaps it was fate that brought you here, however, the foolishness is your own as you naively make a bet on a poker game against an enigmatic wolf. He winks at you, asking for one last hand for a small price. You glance at your winning hand and with an air of cockiness, you quickly agree. Perhaps it was in the cards to go against a trickster of sorts, but nonetheless, you have lost and now you have a debt that must be repaid. The mysterious stranger does not ask for coin as compensation, however, he asks for you to repay your debt in the form of spreading tales across the land.

You set off with a new task in mind, traveling across the land to weave your tales. As you wander about America, you are represented by a giant skeletal figure as you slowly make it across your 3D map in a third person view. Your character moves rather slowly however you are able to quicken the pace either by hitchhiking a ride or jumping on a train. You can even whistle and when hitting the right keys as they come up on your screen in the correct sequence, motivating your character to quicken their pace. Despite how slowly you moved, I honestly did not mind the travel as I felt like I was really experiencing a great narrative. 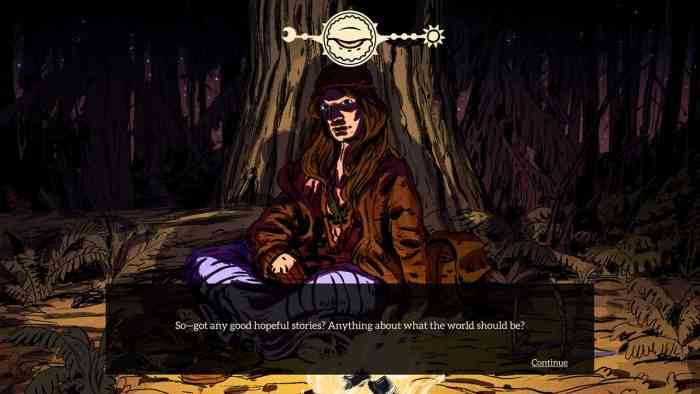 Players will travel from town to shelter, to forested areas to open fields, finding the next location that you can interact with. Once you have found that spot, you will be able to choose between stopping by and witnessing the events before you unfold or simply passing along should it give you the option to. There are countless stories you can experience such as the tale of the frightened little creature who hid in the forest to escape with their father, brothers who miraculously reunited after thirty years or the experience of staying at a hotel that became noisy at night with the laughter of children to find out the next day that there were no children at all. Once you have obtained your stories and experiences, you can find places to camp out where you can share your fire with various strangers who have their own interesting tales to be told. If you can give the travelers the stories that they are in the mood for, in which the story types are determined and separated by the Major Arcana of the tarot cards, you’ll learn a bit about their personal story as well.

One of the most interesting things about this game is hearing how these stories are spread and how quickly they can change. The nervous creature that waited to escape with his father has now turned into a creature that was mercilessly left behind, the brothers who reunited had now met up after fifty years instead of thirty and so on and so forth. It’s interesting to be the person who experiences the story first hand to see how it progress’ and changes, much like the game telephone. As you begin to hear familiar tales that is changed from the original story, it makes it rather interesting when you reach a new area, wondering if you’ll hear the same story again and whether or not it will be even further twisted.

There’s a lot to love about Where The Water Tastes Like Wine, from the beautiful and surreal 2D hand-drawn imagery that adds an air of eeriness. In combination with the blues and roots music, it makes for a perfectly atmospheric game with a ton of great catchy tunes. The voice work done in this game is superb and many great talents offer their skills to this game, the favorable one being Sting as he voices the mysterious wolf that sets you upon your journey. If you’re looking for a great narrative with an air of mystery, this is certainly the game for you. I will admit, it moves a bit slow as you wander from town to town, however the best part of this game is being able to take your time in weaving the story as you learn about the hard times of even harder working people.

Ultrakill gets Official Support for Adult “Toys”, it’s Exactly What You Expect
Next Subsurface Circular Review – A Single-Sitting Experience Worth Sitting Down For
Previous Total War: Arena Review – Light on Tactics, Heavy on Battles