So a bit of a trend that’s been on the rise lately is successful mobile games coming to PC or console. Warhammer Quest is following suit, and comes out on PC, Mac, and Linux soon. I had the opportunity to get my hands on it early and check it out, and while I can say that it’s a lot of fun and essentially a bigger version of the original, you might want to wait until a few of the kinks are worked out. I tried pretty hard to finish it before writing this review, but unfortunately one bug in particular ruined my progress multiple times and eventually I just had to say enough is enough.

Before I dig into my personal issues and things that went wrong, I wanted to take the time to say that ultimately, this is a fun game and worth the purchase if you like playing games on your tablet. I was on PC myself, but I think the entire experience would have been more enjoyable with a handheld device. That being said it was still fun using my mouse and keyboard, but I continually found myself wanting to keep fighting from the couch. Aside from that, the gameplay itself is indeed fun and there is a ton of content available from the get-go. 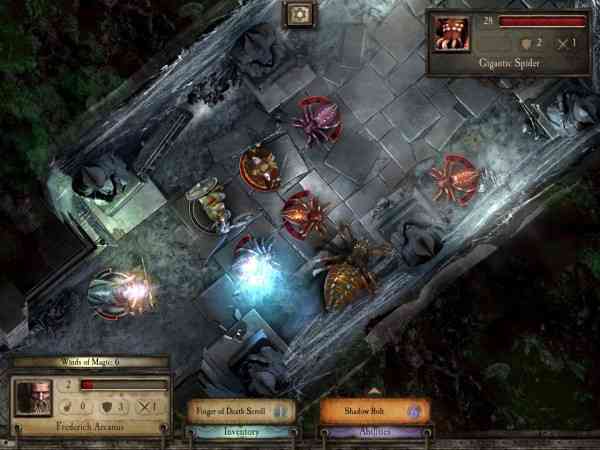 “…essentially a bigger version of the original, you might want to wait until a few of the kinks are worked out”

Warhammer Quest is a top-down turn based tactical RPG, where you can control up to four heroes on an epic adventure. Most of the non-dungeon gameplay involves moving from town to town, shopping at the marketplace and looking for new quests or sidequests to complete for better loot or more gold. Inside dungeons however, you take control of characters to use their abilities, attack enemies, an move around the area. Dungeons are split up into rooms with helpful arrows pointing the way to a new room or area to explore. Move your heroes forward, fight or don’t fight enemies, reach the end of the dungeon and fight the boss. Pretty standard stuff, but there a few things that not only help break up that pattern but actually involve a bit of thinking and planning on your part.

In WQ, players can run into random events. These vary, but at least two of them I saw pretty consistently. The first would be the silent rooms. Sometimes when you enter a room, it is eerily quiet and you can’t talk or make noise. Here enemies can sneak attack you, and you’re advised to move on quickly. The other most common event I saw was the ooze. Occassionally an ooze-like creature will attack you, and either dissipate or damage your heroes depending on how well they stand their ground. These events extend to the outside world as well, like the times I gained some strength by allowing my warrior to eat a mushroom. Within towns, if you take too long to complete all your actions like praying at the temple or shopping at the marketplace, your selected hero can fall prey to other random events that might leave them wounded or weak for the next dungeon. I really enjoyed this. 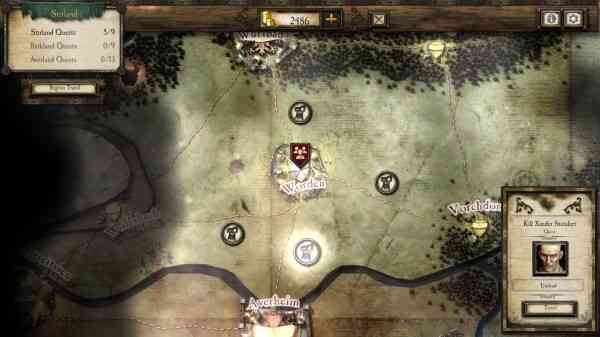 As for the combat, it’s pretty solid. There are a few changes I would like to make, such as eliminating the hit and miss system entirely, but I’m getting ahead of myself though. Combat is basically divided up into actions such as move, attack, or use ability. Some characters can gain extra attacks, and others have bows, magic, or even guns in the case of the witch hunter. If a hero lands a deathblow, they then have a chance to chain attacks and wipe out multiple enemies in one attack. This all feels really satisfying when it works, and incredibly frustrating when it doesn’t.

For example, missing your target; when I miss three times in a row I’m not having fun. However, if I had a different damage range instead but always hit, it wouldn’t bother me nearly as much. It just feels better to always hit, even if it’s only for one damage because at least you’re making progress. Another small part that irks me is the way movement is done between combat phases. Players move their heroes along a square grid to explore dungeons, but when there are no enemies you still have to take heroes one by one down hallways. It just makes for a lot of down time that could have been avoided with the addition of a follow option. 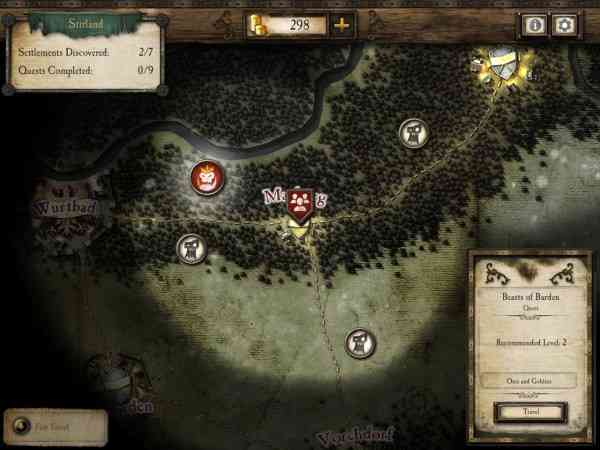 At this point I’m just being picky, but it’s because I feel like the game is so close to being really good but far enough away that I’m unhappy. A few small changes could have really made this title shine and fortunately it’s still not bad, just not great. One issue in particular has plagued me multiple times since I started my first save. It has been incredibly annoying, and appears much too frequently.

About three hours into my first game, I was fighting some goblins in a dungeon when the game became stuck during enemy combat phase. I can hit fast forward all I want, or wait for an hour. Regardless, the game just hangs here. I tried restarting but the checkpoint system works a bit too well and you’ll simply enter the dungeon right where you left off. I thought nothing of it and left the dungeon, losing the experience I had gained. This continued to happen a couple more times to me though, and that’s disappointing. Seeing a bug is one thing, but seeing the same one multiple times that forces you to quit out, load back in, and then lose all of your dungeon progress is annoying to say the least. It’s even worse when you just spent twenty minutes making your way through a more difficult area, only to lose all of that progress.

So, I’m going to wait. If I see a patch on release, or even a few weeks later, I’ll be happy. No, WQ isn’t setting any new major trends in the tactics genre, but it’s a great universe both for those who love Warhammer and for those who just enjoy high fantasy. I have to say as well that the price is actually pretty solid for the amount of content and play time you can expect. If you’re a fan of the franchise or are just looking for a new tactics game, I wouldn’t pass this over.

***Reviewed via a code supplied by the publisher***

Next The Witcher Adventure Game Review – Digital or Board Game Version, This is a Great Game
Previous Forza Horizon 2: Storm Island (DLC) Review – Gear Up for Off Road Muddy Mayhem