Say what you will about the Warhammer 40K franchise, it’s nothing if not substantial. Everything about it is oversized, from the lore to the combatants. It’s grand opera, with clearly articulated heroes and unmistakably evil foes. Warhammer 40K lends itself to many forms, including the still-engaging tabletop games and a seemingly endless parade of videogames. Sometimes it appears that Games Workshop doesn’t always vet the latter carefully–there are a few stinkers with the 40K branding. Not so Warhammer 40K: Chaos Gate: Daemonhunters. Spoiler alert: this game is one of the best uses of the license.

Like the best Warhammer 40K games, Daemonhunters has a deep and convoluted narrative that dives headfirst into arcane lore, battling religions, magic and planetary conquest. You play as the Grey Knights, a subset of the iconic and hulking Space Marines. Grey Knights have psychic abilities in addition to their more conventional weapons. Brother Ectar is a veteran and dedicated Grey Knight soldier. Vakir is an Inquisitor, who sees the Space Marines as cannon fodder in service of a greater goal.  Lucete is an emotionless Tech-Priest. These are just the commanders, of course, and you’ll eventually have many Terran Space Marines at your disposal.

Although it has a complex narrative that unfolds for dozens of hours, Daemonhunters is at its core a story about good versus evil. In this case, the evil is the pustule-covered Plague God Nurgle. Nurgle–one of the most iconic of 40K and Age of Sigmar’s villains–is spreading Bloom across the galaxy. Bloom is a virus on a cosmic scale. It not only transforms whatever planet it infects into a pus-filled hellscape but has a host of other effects like raising armies of undead soldiers. It’s truly nasty stuff. 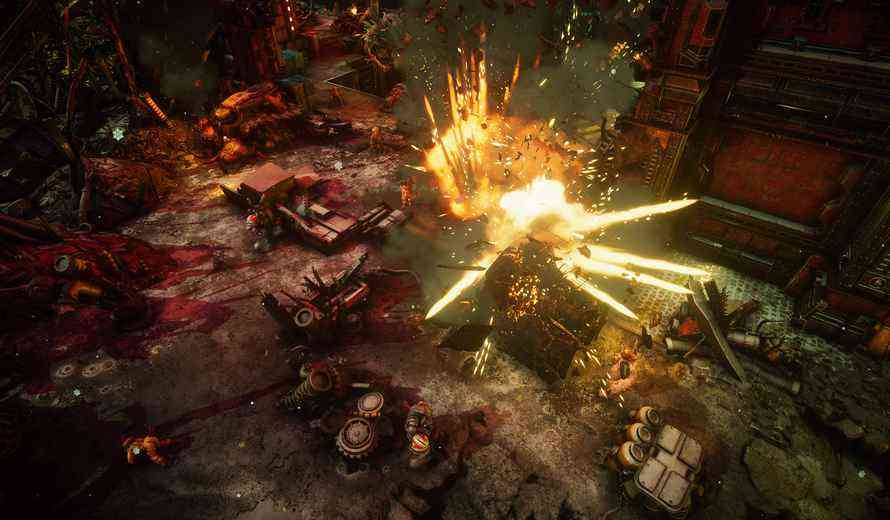 Your basic goal is to pilot your massive ship, the Baleful Edict, from planet to planet, trying to stave off Nurgle’s fast-spreading plague. Each of your fellow Grey Knights has a clearly articulated set of motivations. The result is extremely well-written and engaging.

The Heart of Combat

Despite having a compelling narrative, most people are going to play Daemonhunters for the XCOM-like combat. It’s fantastic. Like many turn-based strategy games, you play on a grid system, moving your 4-Marine squad around the map, using cover and the destructible environment to your advantage. You have the usual action points for movement and attacks, plus Willpower points for special abilities. Unlike XCOM, however, there is no RNG to determine success. If the enemy is within range and line of sight, you’ll score a hit. Overusing your psychic abilities is balanced against some negative battlefield effects.

The maps themselves are fairly linear, pushing the squad forward to the next objective. The game does an excellent job of showing you where you can move, what options you have with your abilities and weapons, and generally helping you make intelligent decisions. You’ll need all the help you can get because quite often the battles are intense and challenging. You have an immense number of weapons and special techniques at your disposal, making combat varied and consistently interesting. If there’s a tradeoff, it’s that the game’s HUD overlay is huge and intrusive in battle when plotting your next move.

Back on board the Baleful Edict, things start to get really complex and learning all the game’s systems will take a lot of time. You have upgrade paths for just about everything, from your ship to each Marine you can control, and these expand into submenus that can feel unnecessarily dense. Of course, you also have a control center where you can plot your next mission and see an overview of the Bloom levels on different planets. Fans of the tabletop game and stat-lovers will dig it. Just be prepared for a learning curve. 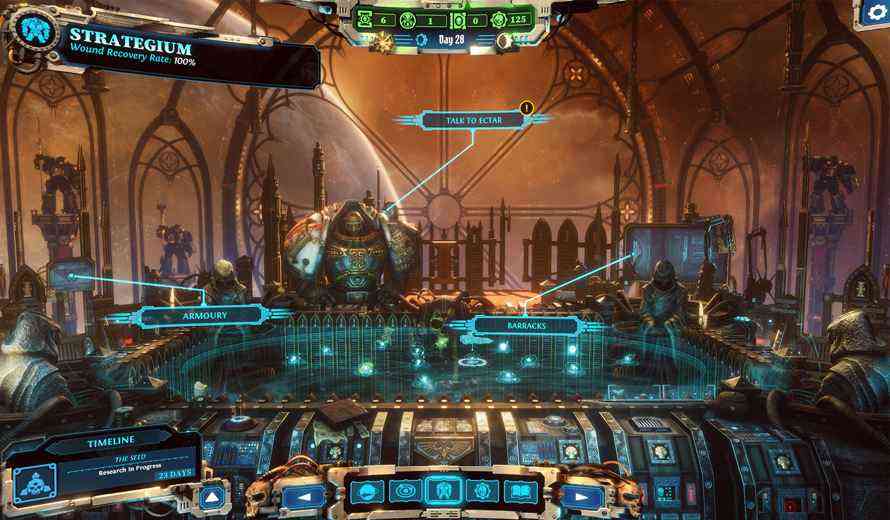 The Best Translation from Tabletop to Computer Screen?

Warhammer 40K is bold, oversized, and not afraid of visual hyperbole. Daemonhunters is one of the best representations of the 40K aesthetic, balancing detail with slightly stylized art. The heroes look appropriately massive and imposing, and the enemies–including Nurgle himself–are gleefully disgusting. Fans of the tabletop game and miniatures will find their favorites lovingly and accurately rendered. The game’s lighting and weapon effects are both impressive.

Daemonhunter’s audio landscape is generally very good as well. Weapon effects are crisp and punchy. The voice acting is quite effective, with pros like Andy Serkis making an appearance. The downside is that outside of cutscenes and some important mission dialogue there are relatively few voiced lines. Daemonhunter’s music is good, but not terribly memorable. It doesn’t feel quite as grandiose as the rest of the presentation.

Warhammer 40K: Chaos Gate Daemonhunters is pretty free of major bugs or performance issues, with consistent framerates and a decent number of audio and visual options. The HUD and menus can get out of hand, mainly because there’s just so much darn information to pay attention to. Aside from that, the camera doesn’t get in the way during battle and the game really sells the 40K experience. 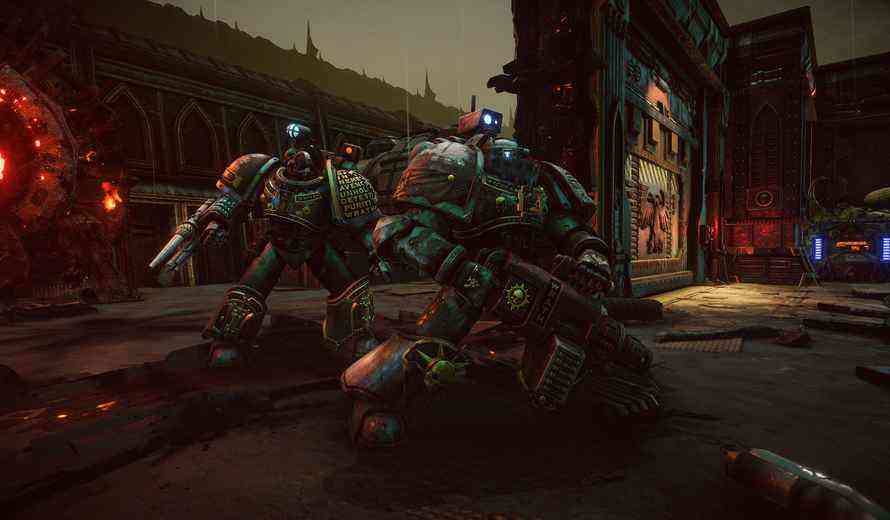 Warhammer 40K: Chaos Gate Daemonhunters is not only an engaging turn-based strategy game, but one of the best translations of the 40K universe to the PC. With a great story and wealth of options in combat, Daemonhunters also captures the visual aesthetics of the Space Marines and infectious Nurgle. While the interface and some systems could benefit from a bit more elegance and simplicity, Daemonhunters is dramatic, over-the-top, amusing and deeply satisfying. Learning its systems and sticking with the lengthy campaign is a commitment to be sure, but one that fans of 40K should be happy to make. 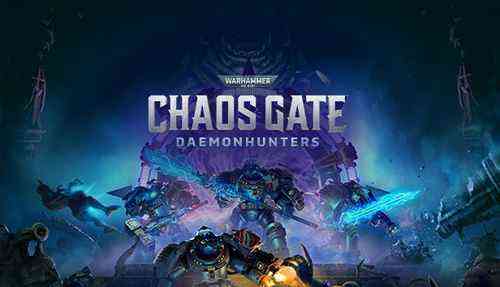