One of the things I have noticed with games of late is that they are much easier than when I first started playing games over two decades ago. Back then, games were so much more challenging.  I found I actually had to take the time to explore everything as much as possible before moving on or I would end up meeting an early demise. By doing so, I learned to be patient, dedicated and to think on my feet. Despite my best preparations, I would still find myself facing very difficult levels and bosses that tested everything I had.  Yet more often than not I persevered.

As time passed and games became more sophisticated, I was able to get away with less in that I did not have to be as prepared or even skilled to complete games.  Multiple save spots and unlimited lives seems to be the name of the game today. Action games provide stronger weapons.  Larger life bars give you godlike powers whereby completing a single player campaign remains only a moderate achievement. Games have now essentially enabled players with so many options and chances one may find they actually need very little skill or preparation to move forward and be successful. As time has passed it almost seems like my reactions, patience and skill grew duller and weaker ultimately failing to prepare me for games like VVVVVV (V’s). 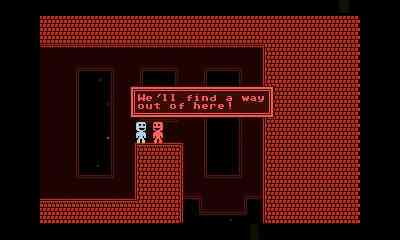 Published by indie developer Terry Cavanagh, V’s is a 2D puzzle platform game where it literally tests players in skill, patience, quick reflexes and dedication.  The story involves Captain Viridian and his crew exploring space until everyone suddenly needs to evacuate their spaceship due to a “dimensional interference.” You (Captain Viridian) escape but are separated from the rest of the crew who are scattered in this alternate dimension. It is up to you to find your crew and find the cause of the disturbance.

As mentioned, V’s is a 2D puzzle platform that can be played in the 3DS 3D format which provides some depth but not much else. In fact, this game is not really about the graphics but rather it is an intentionally retro looking game using 8-bit style blocks that look more primitive than the original Super Mario Bros. Your character is a small, light blue coloured humanoid that looks similar to Sack Boy from LittleBigPlanet. The levels are played out screen by screen similar to the original Legend of Zelda and have only as many colours as the rainbow but with lots of black (you are in space after all). Some levels looked as if it would induce an epileptic seizure due to all the flashing of lights but otherwise are well designed and thought out. The top screen of the 3DS shows the actual game play while the bottom screen displays the map and where you have explored.

Sound wise, V’s has the retro sound and music from an eighties arcade game fused with some nice flute music at the main menu. The sound effects are basic in that they seemed to be inspired by games found on a Commodore 64 or the original Atari 2600. The sound was tolerable but occasionally grated on my nerves. 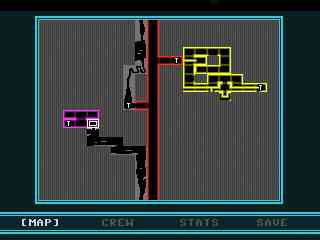 You have two main moves at your disposal in V’s: running and jumping.  You can use the D-pad or the circle to move and press any of the other buttons to jump. When you jump, you essentially go straight up (or down) and continue to be in motion until you hit a surface and then become inverted (like standing upside down on a ceiling of a room). Likewise, while “upside down” and you press the “jump” button again, you head downwards until you hit a surface and then return back into “normal” position.  V’s features many obstacles like moving belts, spikes, and just plain weird moving objects (like the words “Lies” or “Truth” that scroll past) that attempt to prevent you from advancing and cause you to die. And you will die many times in this game.

The reason why one will die many, many times is the sheer difficulty of the game. Imagine if you will, spikes on the “ground” and spikes on the “ceiling” in a particular room with moving platforms that crumble underneath while attempting to quickly move past it and make it across the screen.  Just when you think you made it across, the next screen is a continuation of the previous screen with even more obstacles. There are several instances when you are free falling down several screens and not knowing what is below you until you find yourself quickly moving left and right in mid-air to avoid the spikes that are below your feet. Conversely, there are levels where you ascend a tower only to find the bottom is closing in on you and when you fall behind, you die. Did I mention these towers do not go straight up and rather snake around with multiple spikes from nearly floor to ceiling?

There were many instances where just when I thought I understood the pattern of a level where I could make it across and advance (often resulting in a scream of joy), the next screen would punish me with a trap that I wished I saw but didn’t until it was too late. This game will punish you for going too slow in some cases (see crumbling platforms) but also for going too quickly (which is how I often died) as you make mistakes. 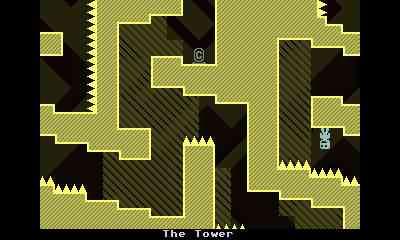 One saving grace that prevented me from hurling my 3DS across the room in fits of rage was the number of spawn points available in the game. Often they are located just before or after a difficult screen where if you do die, you simply start at that place again.

In addition to regular play, there are various game modes including a “time trial” mode; a “no death” mode where you play the game without dying once (good luck!); and “flip mode” where you flip the entire game vertically (which caused both my screens to go black with just the sound available).  Players can also change some of the options of the game including the visual effects and background appearance; having the game go slower; and an interesting feature of being invincible so you could explore the maps of the game without concern of death.

Amazingly enough there are several maps and levels in the game which are reportedly harder than the game I played. For curiosity’s sake, I played some of these additional levels and they are nearly impossible. To get a good idea on how difficult this game was, I died over 300 times in about 45 minutes (the game keeps ongoing stats of number of lives spent and how long you’ve been playing).

Needless to say, V’s is a tough, challenging, merciless game and takes old-school games to the extreme.  You get very little at your disposal, the levels are hard and the graphics are basic.  Yet because of this, you try harder to be better as you cannot rely on anything else to help you. There are no magic items or weapons that can assist you and reloading your last saved spot probably isn’t going to help you much either since it is going to be the same problem you faced last time.  The game requires fast reactions, patience, and learning from your mistakes.  Despite this, the feeling of satisfaction you get when you make it pass a certain level is very rewarding. 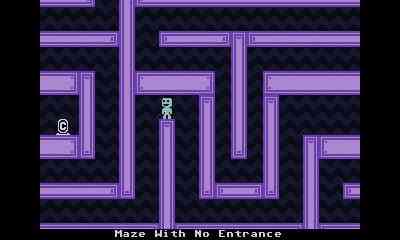 Overall, I am somewhat torn about this game.  On one hand, I lament how new games just do not offer the same amount of challenge as games of old.  On the other hand, I do not recall games being this difficult or basic looking. I do not recall playing a game so unforgiving that I wanted to throw in the towel. I like games to be challenging but also to provide a level of escape and enjoyment. I did not quite get that with V’s. All I got was an occasional level of satisfaction only to find another frustrating and near impossible screen where I spent an inordinate amount of time trying to proceed.

While I understand this game presents as almost a tribute to early video games, I also know that if we have the technology to produce some pretty games that are also challenging and addictive, then developers should do the best they can to do that. I would like to think that early game developers were always constantly pushing themselves to produce better and prettier games with the technology they had, whether it was for the original Commodore 64, Atari, or the NES. I also think the best games are those that are accessible to most audiences. While there isn’t blood or guts, over the top violence, sex or complicated story lines in V’s, the game play is far too difficult for just anyone to enjoy. I also understand that V’s an indie game but there are better indie games out there that really combine what I mentioned and are still considered original and different. V’s may be different from what is out there today and has some interesting aspects about it but it’s certainly not original. Even for the affordable price of $7.99, it may not be worth it.

In the end, VVVVVV was a stress inducing and frustrating experience.  While the game has an old school feel, the reality is VVVVVV does not deliver the same experience I had with similar challenging games back in the day.  Not to mention the visuals disappoint and much more could have been done to make the game a little more forgiving yet enjoyably challenging at the same time. If you are interested in playing a very challenging retro game that is stripped bare of filler and really tests your skills and patience, then I would recommend VVVVVV for you.