Anyone who owns a DSi and who frequents Nintendo’s DSiWare store should recognize the developer of the game featured in this review.  WayForward Technologies is synonymous with some really great downloadable games, such as Shantae: Risky’s Revenge, Mighty Flip Champs, and Mighty Milky Way.  These games have all earned some very positive accolades from those who bought and played them.  Well the 3DS finally gets to see its first game from WayForward as Mighty Switch Force is available in the 3DS eShop.  We had a chance to play this innovative game, which when played, is a mix of genres that I have not had the chance to play on my 3DS to date.

Mighty Switch Force’s story places you in the future where you take on the roll of Officer Patricia Wagon.  You are a cybernetic cop who has been tasked to search out and capture five escaped criminals who, my assumption is, are bad asses given they are escaped felons.  The story is not a deep one, but sets the premise for your adventure.  Don’t look for a deep narrative here, as the game does not need to provide one as it’s job is gameplay, not storytelling.

The best way that I can describe the gameplay in Mighty Switch Force is that it is a hybrid game mixing the puzzle genre with action and platform sequences.  It is quite an interesting mix indeed, and having just reviewed a true puzzle game (Pushmo) I found myself adjusting my play style given what is offered in this game.  For those thinking that this game is going to be more action and platform oriented, you are only about half right, as the game indeed has these aspects, but make no doubt about it, the game has its heart in the world of puzzlers. 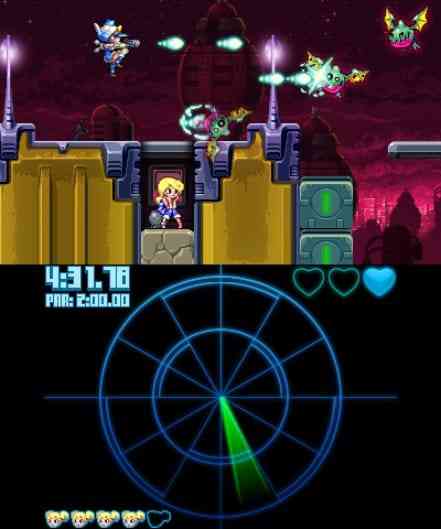 There are a total of 16 stages for you to run, jump, blast, and puzzle your way through.  The action and platform aspects are part filler though for a game that is more puzzle focused.  Each of the 16 levels is filled with blocks that you need to ‘switch’ in order to advance.  When I say switch I mean you must activate and deactivate certain ones in order to make your way through each level.  The need for such is facilitated by the fact that the blocks help you get to specific areas as well as avoid certain pitfalls that you will come across (e.g. spike pits, cavernous spaces, etc.).  As your make your way through a level, and onto the next one, you’ll discover new blocks that have different purposes (e.g. blocks that launch you into the air) and they will assist in your ability to traverse the level’s environment.  Eventually you’ll use all your switch blocks to get through the level, find and capture each of the five criminals, and make your way to the exit.

I found myself quite enamored with the level design and implementation of the puzzle aspects of Mighty Switch Force.  Although I have seen a couple of WayForward’s previous games, I have never had the chance to sit and play through any of them like I did this one.  WayForward is indeed a creative developer and I found that I really wanted just soak up the experience when playing.  This is something I did not expect given that my experience with such a mix of genres is not something I play very often, as it is not really my ‘cup of tea’ so to speak.

As I mentioned earlier on, I just finished playing and reviewing Pushmo, which is also a great 3DS eShop puzzle game.  One of the main differences between the two games, although they are both puzzlers, is that you don’t have the freedom to play at your own pace.  Mighty Switch Force has the dreaded “timer” running as you play, and you are meant to get through the level as quick as you can.   There is no sitting there and planning out your strategy as the timer forces you try to get through the level in the best time possible.  The game actually has a set time that it considers “Par”, which like golf is seen as a solid average score, or in this case an average time.   You don’t die if you don’t make the “Par” time, but you are told that you are too slow and you feel somewhat deflated given you successfully completed the level but you have the game telling you that you that it was not quick enough. 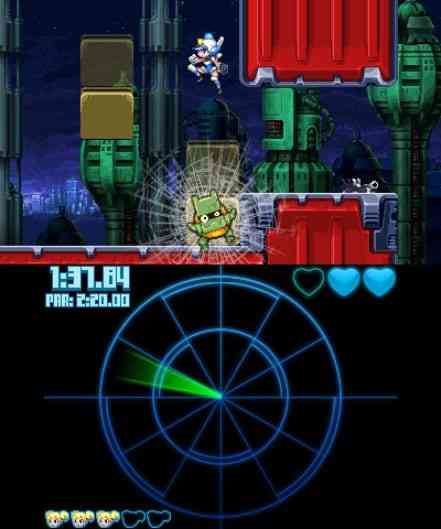 Given the fact that the Mighty Switch Force encourages fast times, this leads to one of the game’s biggest flaws, and that is the total time that it can take you run through all 16 levels.  Should you just try to make it through in the time that the game says you should (the “Par” times), then the game will only take you about 30 minutes or so to get through, and that is not a lot of gameplay time at all.  Your first time through won’t be that quick, as you’ll be getting used to the gameplay mechanics and style, and you won’t know the level design as it will be new and fresh to you.  That being said, you will still try to beat the “Par” times and you won’t be able to sit back and really take in any other aspects of the game as there is no way to turn off the timer and the need to be so quick, so the game won’t last as long as one might hope.

The the game’s “Par” times is the essence of its’ replayability, as once you complete the 16 levels you may want to go back through them and improve your time; however, there is no real reward for such.  Mighty Switch Force does not offer an online leaderboard nor does it use the 3DS’s StreetPass feature which would enable you to trade best times with other players should you pass one by who also has the game on their 3DS.  There is no way to show the world, or other 3DS owners, how good you are.

Visually, Mighty Switch Force exudes the style and flamboyance that WayForward is well known for (Editors Note: The first 4 screen shots in the gallery are dual-screen screenshots and last 4 screenshots of the gallery are top screen captures only).  This sprite based game’s setting is very well designed and the characters, both hero and enemies alike, move about the screen with grace and style.  Colours jump off the screen and the game feels 100% polished in this area.  Given that we are well into the age of polygons and the like, the 2D sprites still manage to feel at home here and I have to say that I hope to see more of this style of game in the future.  3D functionality is also well implemented, as the feeling of depth is well communicated and does not seem like an afterthought or add on.  If I have any complaint, and it is a minor one indeed, it is that with the 3D slider on the 2D sprite based characters seem somewhat flat, and this is to be expected given they do not have their basis in the polygon world.  It is something that you will notice, but it does not take away from the game at all. 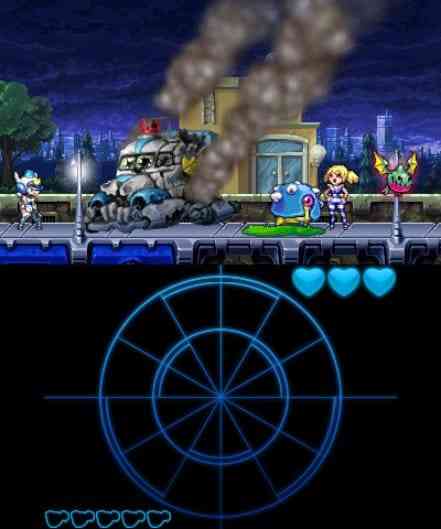 Finally, the sound found here manages to wrap up a pretty solid experience.  From the voice samples, the varying sound effects (e.g. explosions, weapons, and specific environments you traverse), to the very catchy soundtrack, which I have to say is somewhat electronica-dance like but does not grate the senses, all manages to help make Mighty Switch Force the game it is.

Nintendo’s 3DS eShop is starting to come to fruition in the last couple of months as the content that is available is starting to really show what can be done, and WayForward’s Mighty Switch Force is a game that fits in this category.  With stylish visuals, solid sound, and some very addictive gameplay, the only thing I see hurting this game, which is a bit of an issue, is the fact that it encourages quick gameplay, which makes this game shorter then it could be.  At the end of the day though, the $5.99 price tag for Mighty Switch Force is not that expensive for something that so many people should enjoy.