Planes are awesome. They are the embodiment of humanity’s ambition to achieve the impossible. Our dream to fly over the clouds was answered by all the hard working geniuses who designed the modern aircraft. Flying is something that everyone has dreamed about next to owning a mansion, scoring a night with Kate Beckinsale and throwing Donald Trump to a pack of angry Mexicans. To make something of such bliss present itself as an obnoxious bore and frustration would be an achievement, and it’s one that developer Time Symmetry have earned with flying colours.

Perhaps their next greatest ambition is to make the concept of space travel seem as appealing as this game’s ground textures, more on that later. The Air Combat genre shrunk in relevance after the early 2000’s but has recently had a small resurgence among hardcore fans, similar to the Space Sim, Adventure and RTS genres. Similar to all of those, big publishers won’t touch them with a ten foot pole, meaning that any game with the balls to enter will get attention from the community, regardless of quality.

Vector Thrust recently flew out of Steam’s Early Access program and now advertises itself as a finished game. This is why the game features amateurish looking menus, sound effects ripped from the public domain, and less polish than a gas station bathroom. Once you’ve finished reeling from the shockingly basic menus complete with annoying sound effects, the game does feature many different ways to play; offering a single player campaign, multiplayer, scenario, skirmish and challenge modes.

The single player campaign draws influence from the PS2 generation Ace Combat games with their use of fictional nations. Unfortunately, the game never sees an opportunity for you to really care thanks to its cliché tropes, dull gameplay and awful mission design. Beginning your game with teenagers spouting military dialogue unworthy of a two-star Clancy novel that leads into an escort mission where the VIP can die in four hits by enemy aircraft that teleport into your vicinity, is asking a lot from first time players. Clearly when the developers saw the talent on display from their level designers, the rest of the team spent their time drinking themselves into an Oblivion and slamming their fists on the keyboard until the game was “finished”.

“Planes look decent enough, but everything else from explosions, ground textures and particles look like a game released a decade ago.”

Vector Thrust’s gameplay isn’t a simulation, but its handling model is far too clunky and slow to put the game in the arcade category. Steering in this game closely resembles rotating the Earth, and steering is something that you will be doing a lot of. Not because the levels have been constructed in an interesting way to close calls through canyons, but because the enemy artificial intelligence has two modes of attack. Enemy planes will either hold back and missile lock you or try to out maneuver you by going in enough circles to make a merry-go-round commit seppuku. In both scenarios, your heads up display will change color and beep sound effects recorded from a cassette tape; during these events your HUD will either say “Warning” or “Missile Alert”. Being that “Warning” is all the detail you get and “Missile Alert” doesn’t indicate in any way how close a missile is to hitting you, it’s nice to know that the developers spent at least five minutes working very hard on their feedback systems.

Today, it seems that everything made by big publishers aims for photo-realistic graphics, leading to many titles looking very similar to each other. Cel-Shaded graphics are a good way to distinguish yourself from the pack when combined with unique sound design and a beautiful art-style. Unfortunately, it can also be used as a way to avoid detailing things up-close because you don’t have the talent or budget to do the job properly and this is the camp that Vector Thrust falls into. Planes look decent enough, but everything else from explosions, ground textures and particles look like a game released a decade ago.

Sound design is perhaps even worse with every effect sounding like it’s been recorded in a 128kbps bitrate. Bad voice acting is made even worse by the Foley static effects that will make your ears bleed. 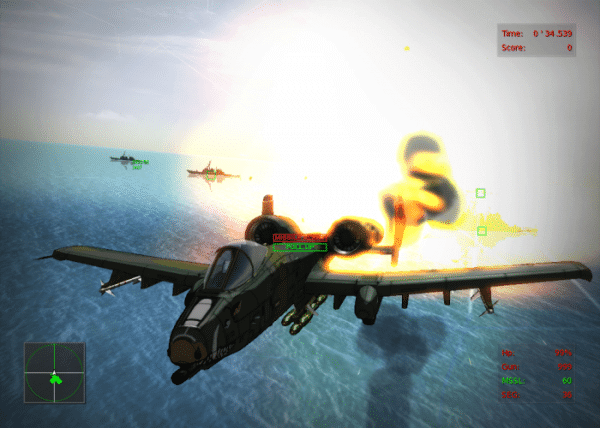 Aside from campaign, you also have battle scenario, which is basically the same just with no cut scenes and equally shitty missions. Challenge mode allows you to experiment with different families of planes which is nice, but unfortunately, there’s little to no variety in these challenges. The large majority of them equate to “kill X number of targets in Y amount of time.” It doesn’t help that because of the sluggish controls, how quickly you kill all enemy planes has more to do with what the AI does rather than any actual skill. If your enemies decide to fly in circles all day, you will run out of time, if they don’t, you will kill them instantly.

It also appears that the developers couldn’t be bothered to enter a “Misson Failed” state when you run out of time in these challenges. Instead, the game keeps going until all planes are dead, to which it says “Mission Completed” before restarting it again. Skirmish mode is the only one that you may be able to get some kind of enjoyment out of. There’s no screeching teenagers invading your ears and there’s no vague objective, you just select the map, game type and settings.

However, the atrocious A.I. and bad controls are still very much present. Plus, the game can’t even bothered to display the score in team deathmatch, you have to bring up the scoreboard manually. I imagine that multiplayer is the same thing. I say imagine since I am unable to truly find out, because no one is playing this game online. And good-riddance, because Vector Thrust is one of the worst games I’ve played this year.

Flight Combat games are rarely made these days, so when a developer decides to enter this niche genre, you would think that they would ensure they are developing a sound product. The only impression this game delivers is that its creators didn’t care to give Vector Trust the polish it deserved. Not a single element in this game stands out as remarkable or even remotely average. Flight Combat fans have a choice, they can download War Thunder for free and enjoy it, or they can buy Vector Thrust and despise it. Easiest. Decision. Ever.