With over 11-million downloads on mobile platforms such as iOS and Android, the Tiny Troopers series has now made its way to PlayStation. Joint Ops combines the two games available for mobile devices (Tiny Troopers and Tiny Troopers 2: Special Ops) into one package that can be played on your Vita, PS3 or PS4.

Played from an isometric perspective, Tiny Troopers is best described as a twin stick shooter. In fact, at many points the game play feels akin to the “bullet hell” styles of shooters that many enjoy. Guiding your little soldiers is a constant ballet of finding a safe path through streams of bullets and taking down bad guys in order to satisfy whatever objective the level presents. This might be kill all enemies, take out certain targets or the oft-dreaded escort mission (which for the record I don’t mind). Bad guys aren’t the brightest bunch. The challenge comes most from avoiding the hail of enemy fire rather than their tactics. There are nearly 60 levels, each with a medal system that encourages replayability for the completionists out there.

I’m not a touch screen gamer by any means. The idea of your thumbs obscuring what’s going on on-screen is just not my thing. Converting a touch screen game designed for mobile devices to dual sticks has its pros and cons. Moving with one thumb stick and aiming/shooting your primary weapons with the other feels completely natural as many games have already done this. Yet, secondary weapons like grenades and missiles utilize the Vita’s touch screen. In order to use them you have to, awkwardly, take your thumb off the stick, hit a small button on the side of the screen and then drag the aiming cursor over your target. In the middle of a fire fight this isn’t always the easiest thing to do. On the PS4 you still use the controller’s touch pad to replicate the touch screen controls but the weapon selection is mapped to the shoulder buttons. That makes it a bit easier but it comes at a compromise. I found the aiming on the PS4 to be much less accurate, almost clunky. It lacks the precision of, say, a game like Dead Nation. 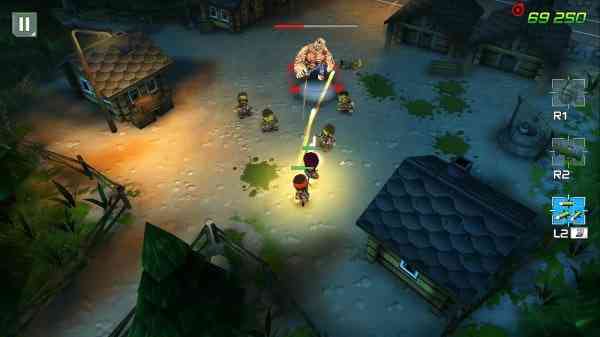 A suite of equipment, character and uniform upgrades give the appearance of a high amount of customizations but in practice I found the equipment upgrades to have the most effect. The rest seem more aesthetic. I, for one, couldn’t care less if my guys were dressed in pink. Recruiting specialist characters for missions seems a neat idea at first until you realize it lasts only for that single mission. That made me feel like my hard earned in-game credits were going to waste.

An interesting dynamic to Tiny Troopers is that squad members level up as you progress and when you lose a squad member in battle they are gone for good. Unless you revive them, of course, which is possible through cashing medals you find during levels. It’s a weird dynamic though in that I don’t think it is fully fleshed out. The price to revive a character is high yet your success in progressing mission to mission is based more on skill and overall upgrades than it appears the characters rank. If you lose a guy, its not like your losing whatever upgrades you’ve already acquired. This makes the whole revival idea feel like there’s no real penalty and a bit redundant to me.

I know it’s not as much of a novelty as it might of once been but the cross save features in games still impresses me. With my PS3 set up in our rec room downstairs, PS4 in a dedicated games room and my Vita for on the road play I love the fact I can sit down and pick up a game like this virtually anywhere in my household. 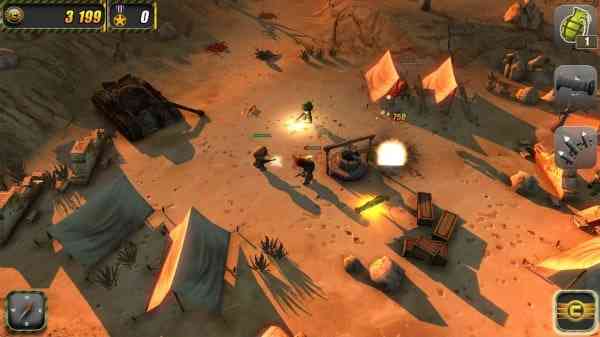 From a presentation standpoint, Tiny Troopers spots a crisp, clean look on the Vita with a colourful palette. The visuals don’t appear to be overly taxing of the Vita hardware yet some periods of slowdown make me wonder if the game wasn’t fully optimized for the Vita platform. Playing on a bigger screen with the PS4 makes the textures appear less sharp. I also found some of the dialogue a bit out of context with the cutesy character approach. It’s a weird mix of visuals that appear to be skewed to a younger demographic and mature themes.

While Tiny Trooper: Joint Ops has some neat ideas perhaps my biggest criticism is that I didn’t find myself overly compelled to return to it. It can be a fun diversion but lacks that “just one more level” sense of attraction. While $7-8 isn’t the worst price in the world, if you have the right mobile device (and who doesn’t these days) the original game is available for under $3 and the sequel is free (if you don’t mind stomaching in-app purchases). Definitely some food for thought before you download it from the PSN store.

***The game was reviewed primarily on the PS4 but also played on the Vita and PS3. Codes were provided by the Publisher.***