Remember those kids that were crazy for Digimon, Pokemon, Yu-Gi-Oh, Beyblade, etc. back when it occupied the TV and also school classrooms for the longest time? Yea, I was one of those kids. Apologizes go out to my mother who had to hear me rant about the shows and also purchase almost all the merchandise each show would produce. Nonetheless, Digimon lingered amongst the popular shows that most still know today (I’m looking at you Pokemon). While Digimon has more or less drifted off into the shadows over the years, there have been quite a bit of video games based off the series. Unfortunately, the video games yearned for are not localized in North America and the last one over ten years ago. With that said, I can only imagine Digimon fans were hoping for a strong comeback for the series or at least a worthy spiritual successor.

Like most basic fighting games, Digimon: All-Star Rumble has three modes you can play in: Story, Battle (Versus), and Training. The main gameplay aspect throughout the three modes is the same in which you battle one or up to three other Digimon to achieve a certain goal in a small arena or stage. Whether it’s getting the most kills or staying alive the longest, the rules and circumstances for each match is the determining factor on how you can be victorious. 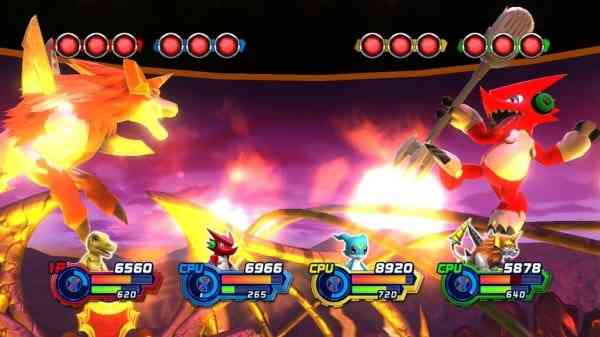 Again, like most of the basic fighting games, the story is told through pictured stills and words that mirror a visual novel. In this case, the story is about how the Digimon want to hold a tournament to see which Digimon will end up at the top. Since Digivolving occurs through battling, they thought this would be a great way to gather all the Digimon who want to Digivolve. Thus, they named the tournament Digital Monster Evolution Tournament in other words, “DMET”. Initially, you start off with four Digimon to choose from and unlock the rest of the eight by completing the story. The story is the same regardless of what Digimon you choose to advance in the story mode with.

After going through the visual novel-like presentation of the story in each level, you are immediately put into a simple platforming environment where you can collect items and battle a small group of enemies. When completed, a Digimon will be at the end of the level in which you will also battle and unlock them in the character selection screen if you have not already. Each level is surprisingly short and can be effortlessly completed in less than ten minutes. The difficulty does amp up with each new level, but they can still be quickly and easily completed. The story is definitely not a selling point for the game, but it at least sets a stage and tone for each battle.

Battle mode consists of multiple sub-modes where you can pick what rules to apply to win. Unfortunately, there are no online features for battle mode so you’re stuck battling a CPU or a friend you can drag over to your place. Up to four players can battle it out which can get pretty fun but also boring pretty quickly. It’s the same battle system in story mode with the addition of letting your friends join in. Training mode is self-explanatory in which you can have a CPU as a punching bag to practice or just let out some steam. 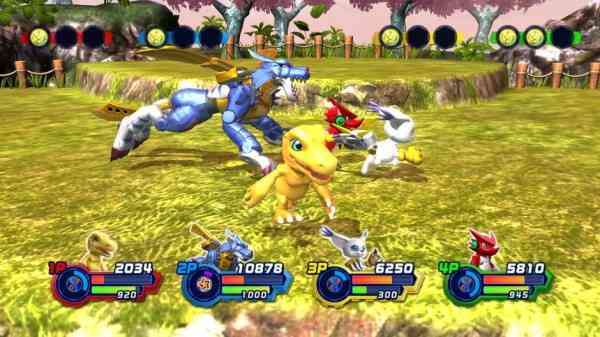 Fighting mechanics are extremely simple and without a doubt directed towards younger gamers. You have your basic moves such as jumping, weak/medium/strong attacks, and blocking/guarding. Where it gets interesting is when the Digimon can evolve, or more officially called, Digivolve. You can Digivolve after filling your attack gauge and can stay in your Digivolved forms until the gauge is empty which continuously depletes. Even more so, you can enter the Digimon’s Super Form too. Another interesting feature in the fighting mechanics is the usage of Digicards. With over 200 of them to collect, you can equip two cards onto your Digimon before battle to have special action sequences and animations in battles.

Even though the fighting mechanics are extremely simple, the addition of Digivolved and Super Forms and also the Digicards adds a little flare and specialty to battles. Unfortunately, it can really only keep you entertained for a while before everything just becomes downright repetitive and too familiar. It’s really the process of seeing the Digimon change forms and collecting the Digicards in where most of the fun lies after endlessly battling over and over again. 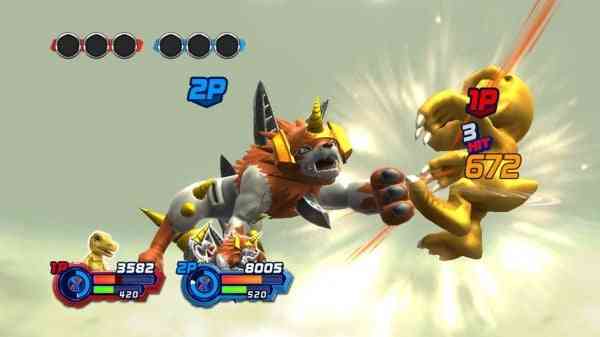 Visually, Digimon All-Star Rumble does an alright job. The pictured stills had nice detailing and vivid colours to top it off. Meanwhile, the actual animation for the game got a little crazy at times when there were things such as ground stomping where the screen looked like it was glitching out. Overall, the visuals were good for the simplicity the game offered.

A treat for the fans would be the voice acting for the Digimons as they were from the original anime. Although they weren’t fully voice acted in all the scenes, they did appear enough times to give the fan service the game needed. Music and sound effects on the other hand, were quite disappointing. They were more on the annoying side as they felt like cheap and humorous sounds anyone could bring about or present.

Unfortunately, this isn’t the Digimon game fans will be jumping up and down for nor is it something they deserve. There isn’t really a key selling point to the game unless you want to collect some Digicards or hear the voice actors bring the characters to life once again. Unless you’re a hardcore Digimon fan, just stick with the anime or continue hoping for those Japan exclusive games to makes its way to North America.

Next Lara Croft and the Temple of Osiris Review – Who’s Down for a 4-Way with Lara?
Previous Tiny Troopers Joint Ops Review – Ready! March! Straight to the Cheap Bin