Building up a high score chain in twin-stick shooters is one of the best feelings in video games, and the creators of Crimsonland and Neon Chrome are looking to add a cool new mechanic to the mix in their latest shooter, Time Recoil. That cool new mechanic is bullet time, a term that gets kicked around every time slow motion occurs in high-octane action scenes that was coined by movies like The Matrix and Max Payne. In Time Recoil, killing bad guys slows the action down making it easy to plan your next move or line up your next kill. It doesn’t last long though, and part of the fun is keeping the bullet time running by adding to your kill count while wreaking as much destruction as you can in the game’s bite-sized maps. That’s Time Recoil in a nutshell, and while it certainly makes a cool first impression, the novelty wears off more quickly than I would have liked.

Tying everything together is a convoluted storyline about time travel, paradoxes, and alternate timelines — you know, the standard sci-fi stuff. You play as Alexa (not to be confused with Amazon’s Echo voice service), who somehow gains the ability to survive the dangers of time travel. She is recruited by a rebel organization in the mid-1980’s to go back in time and save Paris from being destroyed by the evil and appropriately named, Mr. Time. This can only be accomplished by rescuing scientists, eliminating key players, and collecting important documents that will hopefully change the outcome of events. 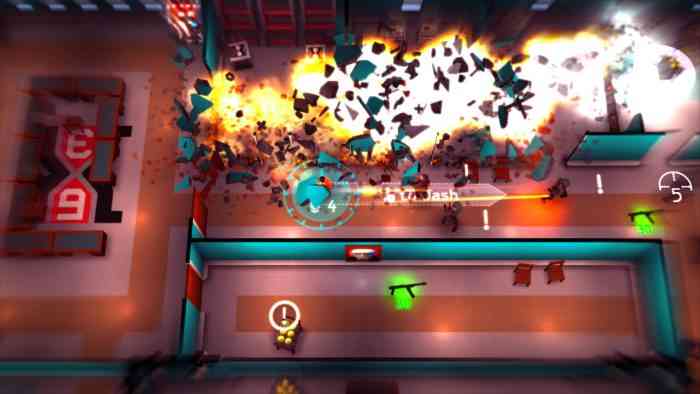 It’s clear that Time Recoil is inspired by the Hotline Miami approach of offering fast-paced and violent gameplay that teeters on repeated trial-and-error. Both games embrace death as a part of its design. The quicker you become okay with dying — and you will die a lot — then the easier it is figuring out the best way to tackle each level as quickly and efficiently as possible. I learned early on that taking out every enemy wasn’t necessary for Time Recoil since ammo wasn’t as plentiful as it is in other top-down shooters. Simply going in on kamikaze mission is foolish and often results in death when your ammo is immediately depleted. Instead, I was able to focus on how I was going to complete my objective with the resources and arsenal I had or will soon pick up.

“Time Recoil really boils down to a simple process: kill, kill some more, slow things down, blow stuff up, kill again, and exit the level”

The inclusion of unique special moves means there are many ways to complete your task. With that said, don’t expect a multitude of paths or open-ended gameplay. Racking up kills will unlock special moves like the Dash, which can — you guessed it — allow for instant kills at blistering speeds or crash through thin walls, making you feel like a more badass Kool-Aid man. Other moves like the Psy-Blast (a powerful ball of energy that acts as a grenade of sorts) is useful when wiping out a room full of baddies, while the Time Freeze, er, freezes your surroundings, allowing you to slip by lasers, escape to safety, or sink a bullet in a crowd of enemies before watching them all collapse in a satisfying bloody mess. The abilities are pretty fun to play around with, but often times I’d forget to use them. It would’ve been nice to have a visible icon on-screen indicating what special I currently had but alas I had to make do. I found the Psy-Blast to be the most useful as it not only obliterated enemies to smithereens but it also left a pile of destruction in its wake, effectively taking down walls in the process.

At its simplest, Time Recoil really boils down to an elementary process: kill, kill some more, slow things down, blow stuff up, kill again, and exit the level. Time Recoil’s biggest problem is that it stops surprising the player very early on. Level design becomes repetitive with similar and unchanging aesthetics, which is kind of odd since Alexa is jumping back and forward in time. It seems like a missed opportunity that developer 10tons didn’t inject some visual spice to levels set in the 70’s and 80’s. The above special moves are a blast to use at first, but the excitement wears off quickly. 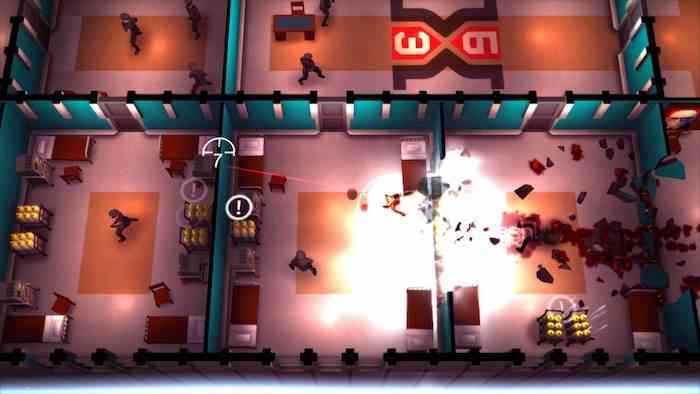 In fact, the overall presentation of Time Recoil falls pretty flat. Aside from a decent thumping soundtrack (even that grows tiresome after a while), the whole experience lacks charm and personality. The comic book text lends itself well to the art style but it’s never explored throughout in unique ways. Little details like being able to push NPC’s around like chess pieces at the rebel safehouse pulled me out of the experience. I still enjoyed the moment-to-moment gunplay, but I’d be remiss if I didn’t admit that I got bored about midway through the campaign.

With over 50 levels, Time Recoil may sound like a lengthy adventure but each map doesn’t take long to finish. The difficulty ramps up around Chapter 3 but once you’ve progressed enough to unlock special moves, Alexa becomes an unstoppable superhero. When the campaign is all over, determined high-score getters can take their chances in the Time Attack mode so which involves replaying missions in the fastest time possible. Since most of the action is spent in slow motion, the time limit for each level isn’t based on real-world time. In other words, 30 seconds spent in slow motion may only be 5 seconds in-game. I found myself slightly more engaged in this mode over the campaign and is a welcome addition to a game that doesn’t have a ton of meat on its bones. 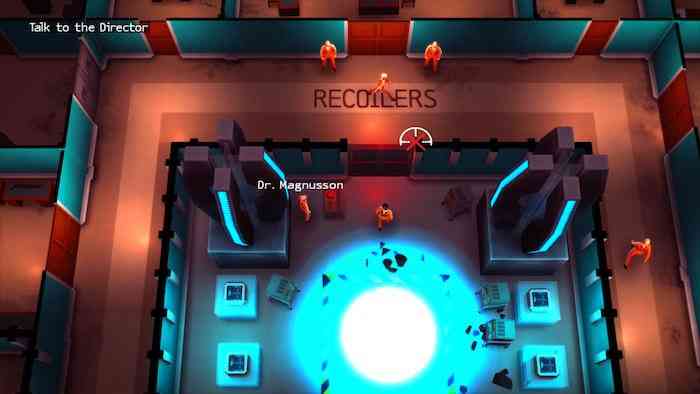 Time Recoil is a competent action game with a gimmicky but cool mechanic that controls pretty darn well too. But it’s not a good sign when that central idea becomes old and tiresome. I wished there was more variety in levels because the overall story is interesting despite not being entirely original. The Time Attack mode surprised me with how deep it actually was but by the time I finished the campaign, I felt like it was too little too late. There’s some fun to be had, but your time may be better spent elsewhere. 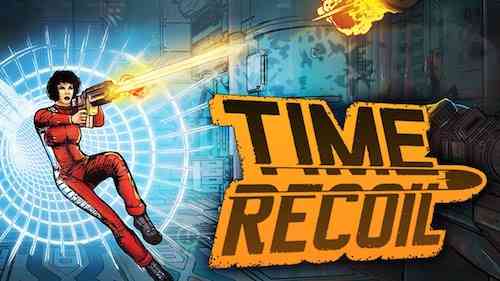