Thief (PS4) Review – Not Quite PS4’s First Triple A Game, But Good Nonetheless

To say the Thief community has patiently waited for Garrett the Master Thief to return would be an understatement. Fans have been chomping at the bit for some 10-years waiting for a new Thief game. With releases in 1998, 2000 and 2004, the Thief franchise managed to build themselves an active and loyal community. Throughout the years however this fan base has grown increasingly agitated with rumours of delays and just a general lack of progress towards a final build of the game. Finally the wait is over and Thief has arrived as one of the more hotly anticipated games this year. Is this the Thief game fans of the franchise have been waiting for? Better yet, is it a game PS4 owners can truly call a must own? Well both are tough questions to answer as I can only speak from my own experiences and for what it’s worth my time with Thief was simply time well spent.

While there is no doubt previous Thief games shaped the way stealth games are played today, Thief is not for everyone. If you enjoy those linear Call of Duty or Battlefield ‘run and gun’ type games, this game is not for you. If you pick up Thief for the combat, you’ll be sorry. Frankly, the combat stinks but Thief is not about the combat. Thief is a stealth game at heart and requires patience. There is nothing mind-numbing about this experience either. You need to use your noggin’ to solve some of those puzzles and whip up a game plan before you venture out into the city. Managing your inventory and carefully considering your approach is a massive part of the game. It took me a level or two to get used to the style of play but once I did, I was hooked. This being said there were some aspects about the game that annoyed me, but more on that later. 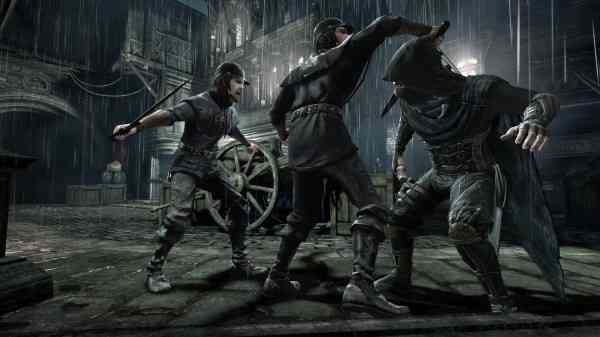 Thief is not a sequel or prequel but rather it is its own stand-alone reinvention of the franchise with an all new storyline, some new gameplay mechanics and some shiny new next gen graphics. The story takes place in a city on the brink of chaos. It’s filled with sickness, death and oppression. Garret the Master Thief returns as the games main character. After losing his protégé, Erin, in a bizarre rooftop fall early in the game, Garrett awakens one year later only to find himself confused and his memory a little foggy. He also quickly discovers he is one of the most wanted men in the city. After meeting with his old friend Basso, Garrett embarks on a job to steal a valuable ring. This however is not just any old job as Garrett soon sets off a chain of events where he begins to discover what is going on in the city, what happened to Erin and where he disappeared for the past year.

Along the way there are several twists and turns, yet all in all I never found the plotline to be particularly innovative or even all that interesting. There are small interesting blips here and there which captured my attention but otherwise I never found the story all that captivating. It had just a little too much of that been there and done that feeling. On the other hand, some of the characters are fascinating. The ruthless General for instance is easily one of the more entertaining characters as he will stop at nothing to get what he wants. He’s bad ass in a ‘Gangs of New York’ Daniel Day-Lewis as Bill the Butcher kind of way.

The real enjoyment in the game comes from the stealth gameplay. For many this will sound boring but surprisingly enough, it’s not. The pacing of the game is spot on. Exploring and sneaking around the shadows moving from one objective to the next is enjoyable. There is a sense of tension that really works in the game. Trying to pick a lock with guards approaching quickly will get your heart pumping. 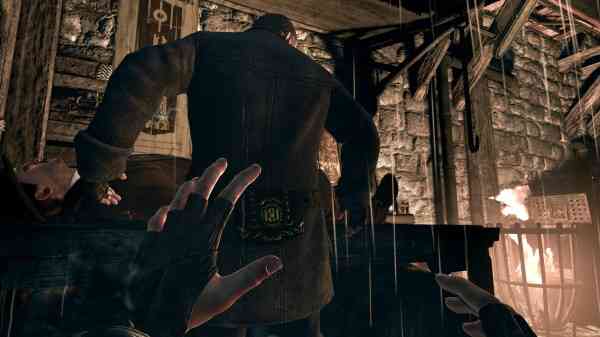 I never felt like I was being lead down one linear path either. Eventually you will end up in the same area to keep the story pushing along but I only occasionally felt like Thief was guiding me down a singular path. There are quick time events and escape sequences which turn out to be big linear trial and error sequences but overall I would have to say I did feel like I had a vast amount of freedom in the game.

You can play the game aggressively but Thief rewards you for stealth gameplay. Staying out of the light, walking quietly, not disrupting those fucking noisy crows in cages, quickly swooping past guards or accessing high points yielded far greater success than say clubbing enemies from behind with Garrett’s trusty blackjack. You can also fire your bows at guards but many take two or even three strikes in order to take them down. Most guards rush at you fairly quickly and if ever I found myself outnumbered it would always lead to my death. Bottom line be selective who you take out and don’t engage the enemy unless you must.

As you progress along in the game you will snatch all sorts of items along the way. These items are translated into actual currency that can be used to purchase items and upgrades. You can also earn focus in the game which is an ability Garrett inherits early and allows him to see items he can steal and paths he can take. Focus is a nice little addition for those newer to stealth games and for those looking for a little assistance along the way. I will be honest here I certainly appreciated some of that hand holding.

If there is one particular aspect where Thief excels it comes in the way of all the customizable options. For instance, there are four layers of difficulty in the game. ‘Rogue’ is the games easy difficulty designed for those new to stealth games and who just want to blast through all the levels. ‘Thief’ is the equivalent of normal mode and ‘Master is your basic hard mode where the AI is a little sharper and everything is much more of a challenge. What is however unique to Thief is the fourth ‘Custom’ difficulty mode. In ‘Custom’ mode you can select one of the three basic difficulties but also turn off some of those assist that make the game a little easier. You can turn off focus, tinker with your save points and even select stealth takedowns only. So for those looking for that classic Thief experience, the Custom mode is for you. There is even a modification that forces you to restart the game if you die – now that is hardcore! 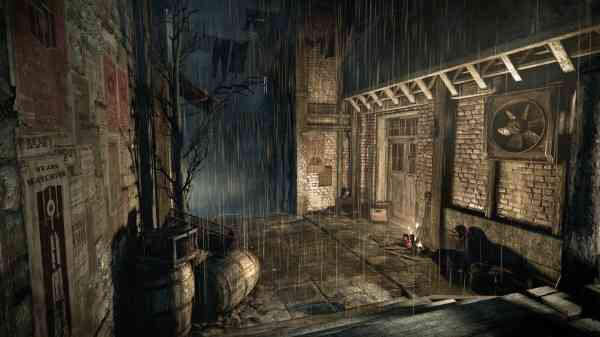 Control wise, Thief is a bit of mixed bag. Using the Dualshock 4 touch pad you can select items such as the various types of arrows you can use, food and other stuff from your inventory. It works well but doesn’t seem all that natural. Likewise, running, climbing and jumping is accomplished with the L2 button. Again, it didn’t seem all that natural as pulling the L2 repeatedly for such actions felt off. Despite some of my issues with the controls, Garrett does move about in the world quite fluidly.

When you take into consideration Thief takes place at night and in the dark it’s a great looking game. Some of the cut scenes appeared a tad murky and I did notice some jaggies here and there. Despite some of the visual glitches that may be fixed with a day one patch, Thief is an excellent looking game. It doesn’t exactly push the limits of the PS4’s hardware but for a game released across multiple platforms this early in the PS4’s life cycle, I would say Eidos Montreal did a fine job in the fidelity department. Sound wise, Thief is as good as it gets. The sound effects are spot on and every little thing could be picked up in my home audio room. Sure there are occasions I wished the voice work was a little louder but overall the soundtrack delivered and provided for a game rich in the audio department.

Thief doesn’t exactly push the stealth action genre forward and likely won’t make many shortlists for game of the year; however, it is without question a game fans of the franchise will enjoy. Even those new to stealth games should enjoy the story-driven intense gameplay. Despite some of Thief’s annoyances, the game is rich in detail and hard to put down. Needless to say, this is one convict I won’t be locking up any time soon.

Next Strider (Xbox One) Review – Old School Flavour With Some Modern Day Trimmings
Previous Line of Defense Tactics: Tactical Advantage (PC) Review – Your Best Defense Tactic is to Stay Away