I can’t believe that I’m saying this, but The Wizards Enhanced Edition, from Carbon Studio, is the second VR first-person wizard fantasy I’ve played in just the last month. I think it says a lot about the maturity of the PSVR as a platform that its game selection is getting so expansive. And much like The Mage’s Tale, which I checked out in February, The Wizards is no shallow, throw-away VR experience; it’s a well-crafted RPG-like with enjoyable gameplay and polished production values. It lacks a little in the area of depth, but overall this is another solid experience for owners of the PSVR.

If you have played The Mage’s Tale, then The Wizards will look very similar to you when you first strap on your PSVR headset. Both employ a first-person point of view in which you see a pair of disembodied hands floating in front of you, and in both you play as a wizard who casts ranged spells as your primary attack. And also in both, you traverse through a linear series of levels killing enemies rather than a quest-based open-world like you might see in Skyrim VR. The Wizards has a single player campaign that involves mostly killing all the enemies in a level, followed by Boss battles. Sometimes there are other objectives and even puzzling elements as well.

The Wizards Enhanced Edition is another PSVR game that requires two Move controllers to play. That is unfortunate for those who only own a DualShock 4. In theory, the Move makes a lot of sense for a title like this. Holding it is much like a wand, or sword, and for swinging actions it’s the obvious choice. The problem, though, often rears its head with the Move’s directional precision when doing a throwing motion. In The Wizards, I found this to be much less of an issue than in other PSVR games like The Mage’s Tale for example. Your spellcasting is gesture based, and it is well done. As an example, to cast a fireball, you swipe your hand to the right while holding the trigger. 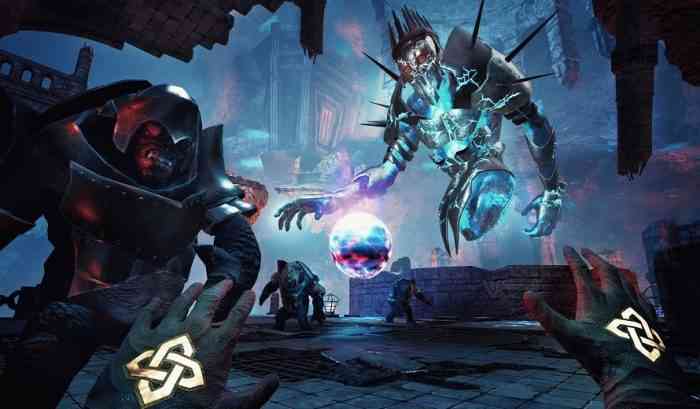 There is still a bit of awkwardness in aiming, but the Enhanced Edition at least has the added feature of a lock-on that seems to pop up if you look at a target for long enough. Speaking of enhancements, this version for the PSVR allows for more customization of such things as rotation, movement speed and casting hands. This is a great addition, as each person’s tolerance level with VR is different and allowing for more comfort settings makes this a very accessible title.

Movement is a particularly strong point in this game. You can move fluidly forward by holding down the Move button, but there is also the option to teleport. Surprisingly, teleportation was my preferred method of locomotion as it is very intuitive and easy — you just point and click to where you want to go. In some games, it might feel immersion-breaking to have to teleport, but in a game about wizards it feels logical. If this game is any indication, the old problem that VR games used to have with movement is becoming a thing of the past.

I Put a Spell On You

Spellcasting in The Wizards Enhanced Edition is really fun, and the VR format is perfect for this type of gaming experience, making you feel like a real sorcerer throwing real fireballs, lightning bolts and other cool spells just like the wizards in the movies. There’s a satisfying rush you get when you toss your spells and they explode, making you feel powerful. You also have other powers besides your ranged spells; you can create a shield with your left hand, and ice bows in your right. There maybe a limited selection of spells to choose from, making the game a little bit repetitive after a while, but there’s lots of fun to be had for a while nevertheless. 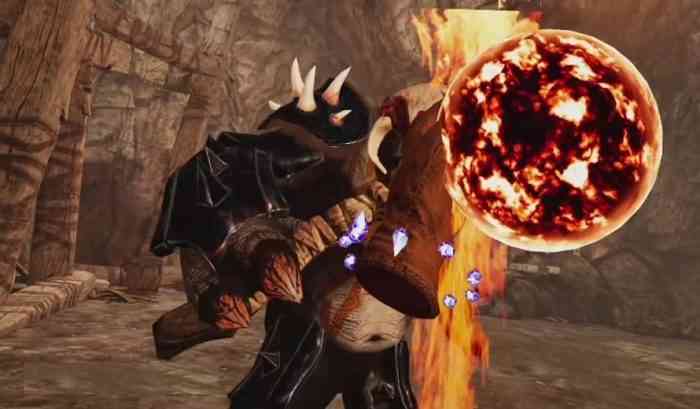 Another standout aspect to The Wizards is its great art and sound design. It looks good, even better than other PSVR titles I’ve played. While many VR games lack detail up close, I found that textures and surfaces in this game looked great, even on close inspection. The colorful environments and spells are a pleasure to immerse yourself in, all while the superb music and voice acting provide loads of theatrical gravitas to accompany the explosive gameplay. Draw distance seems to be pretty good although far away objects don’t tend to have a lot of detail. Overall though, The Wizards is very polished and easy on the eyeballs, and that is not something that is always said about VR games.

On the downside, the simple enemy-slaying gameplay does lack variety after prolonged play. Strictly speaking, The Wizards is more of a Shooter than an RPG since you are using ranged weaponry to slay monsters, and there is only the thinnest story elements to set the stage for combat. Levels mix things up a bit visually and thematically, and there are collectibles like gems to find, but your 6 or so hours with the game will feel a bit repetitive. Something the game does to mix things up that I really liked was to include Fate Cards — collectible cards you find as you play that can be used to tweak the game in a variety of ways. As well, there is an Arena mode in addition to the Campaign, but the only difference is that it gives you endless waves of enemies rather than discreet levels. Despite these efforts, I would have still liked to see a bit more RPG elements and narrative depth in The Wizards than is currently offered.

The Wizards Enhanced Edition is a pretty fun VR fantasy adventure that brings consistent thrills to the PSVR in its cool spellcasting and its polished presentation. You’ll feel like a real, powerful wizard slaying orcs and goblins and lots of other crazy creatures — and the launch price of $24.99 is pretty sweet too. The relatively short length and one-note gameplay might spoil the magic a little bit, but there’s no doubt that this is a VR game that all aspiring warlocks should consider trying.