The Walking Dead: Episode 4 – Around Every Corner (Xbox 360) Review

Much like the previous episode, The Walking Dead: Episode 4 – Around Every Corner manages to push the story along and ultimately sets the stage for what should be a memorable finale to one of the more fantastic gaming experiences this year.  Yet I have to admit, this episode tended to drag a bit and some of the exploration sequences felt a bit tedious.  Don’t get me wrong, the storyline is as compelling as ever, the decisions you make are arguably some of the most critical yet, and if you have already invested the time into the previous three episodes you will want to play Episode 4; but the question remains, is it the most memorable episode released to date?  Well not quite, but by the end of the Around Every Corner you will absolutely start counting down the days until the final episode arrives.

Around Every Corner picks up where Episode 3 left off.  Our rag tag crew of zombie apocalypse survivors make their way to Savannah via a train they managed to fix up just enough to get it running.  Their ultimate goal is to find a boat so they can sail away into the sunset.  Where they would go once they hit the open water I have no clue; regardless, they are desperate to get off the zombie-infested lands any way possible.  Much like the previous episodes things do not go according to plan and along the way Lee (played by you) has to make a number of critical choices and decisions that impact the way the story unfolds.  During your adventure you will run into some new characters.  Some of them you can trust and some you cannot.  There are several twists and turns throughout Around Every Corner and the emotional attachment to the characters becomes ever deeper.  Without giving too much else away, that is the basic premise behind Episode 4.

Much like previous episodes the character interactions remains a strong point.  For instance, I found myself genuinely concerned for Kenny’s emotional state (sorry I can’t tell you why as that would spoil previous episodes) and I found myself detesting Ben given some of the crap he pulls along the way.  I cared for Clementine even more so this time around and I wanted the new characters I encountered to just go away.  Unlike many video game experiences of the past I found myself becoming emotionally connected to the game and those feelings you get when playing the game are hard to put into words. 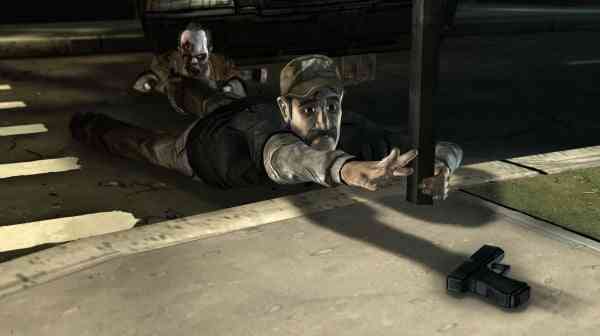 Once again I struggled with many of my responses when I interacted with characters.  With most responses I went in with the purpose of maintaining an open and honest relationship with the rest of the troops, and more importantly with Clementine, the little girl Lee looks after.  Unlike previous episodes, I found myself a little more careful with my responses and to this day I regret some of the decisions I made in previous episodes as some of those decisions impacted the events that occur in this latest episode.  It is actually quite remarkable how the developers managed to link all the decisions you make from one episode to the next.  It is what truly makes Telltale’s Walking Dead games a memorable experience which hits at your core.

I have to admit, much like the previous episodes there are certain parts of Episode 4 where I felt my decisions never really impacted the game.  Yes, there are critical decisions that will impact who will come along with you to perform a certain task, but in the end I still felt like some of my responses never really impacted the story too much.  I guess I have been spoiled because at the end of the day I am somewhat conflicted and still feel the developers did a fantastic job in this regard.

Another issue I had with Around Every Corner, which I have had with previous episodes, is the combat sequences.  There is a little more zombie battling this time around so some of the flaws with the combat mechanics, as well as in the game’s trial and error quick time events, rear their ugly head a little too often.  It is unfortunate because if the combat was a little more polished the series as a whole would likely earn even more accolades from gamers and media alike. 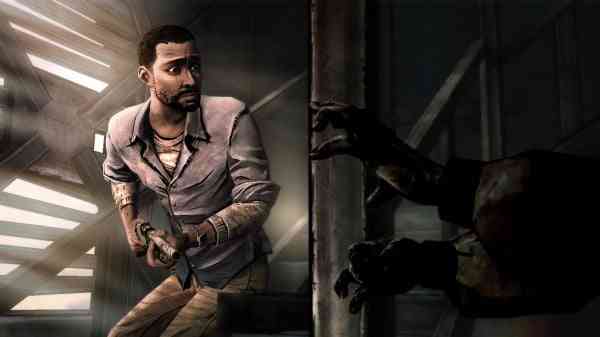 Much like previous episodes, Around Every Corner can take somewhere between 3 and 4 hours to complete.  It took me two sittings to finish this one off.  This time I found myself rushing a little bit more as I wanted to get the story moving and get to the end, so I wasn’t all that interested to learn about some random poster on a wall or what was under a desk.  Despite this, you will feel like you must look over every area, as you certainly do not want to miss a critical piece of any puzzle.  In the end, I would have preferred a longer experience but when you take into account the affordable 400 MS price point, Around Every Corner is a perfect length and great ‘bang for the buck’.  Keep in mind however that if you are purchasing Episode 4 you likely would have already picked up the previous three and sunk a earlier 1200 points into the franchise.

As usual, Episode 4’s visuals stay true to the other episodes and are once again top notch.  The animated comic book style continues to work well for the game.  Some of those technical issues surface from time to time; however, despite some of the glitches the game looks fantastic.  You can almost make an argument that the voice work and dialogue between the characters steals the show.  Even during those sequences where there is no voice work at all and the camera simply pans in on a characters face I found myself moved.  The raw emotion of the characters is captured to perfection.  The game is able to accurately display not only the emotion but also the body language of the characters is wonderfully captured as well.  The background noises all keep you on edge and the subtle music only serves to add to the tension.  All in all, it is a game that is very strong in the visual and audio department.

Much like a set-up man coming into a ball game in the 8th inning, The Walking Dead: Episode 4 – Around Every Corner sets the stage for what should be a fantastic close to a terrific series of games.  In this latest chapter the decisions you make are more critical than ever and the emotional attachment with the characters will leave you thinking about them even days after you have played the game.  There is no doubt there are times that Episode 4 does feel a little stale, and frankly the combat sequences do come up short, but at the end of the day fans of the previous three episodes will walk away dying to find out what happens in the final instalment to one of the better video game experiences of 2012.