Back in 2009 Little King’s Story debuted on the Nintendo Wii. Not owning a Wii, I unfortunately missed out on this RTS/RPG hybrid that was much loved by those who had the opportunity to play it.  Konami recently released an enhanced version, aptly titled New Little King’s Story on the PlayStation Vita.  It offers up a brand new story line, high definition graphics and it takes advantage of the Vita’s touch screen functionality.

When we first meet our hero, King Corobo, or whatever you choose to name him, we find him in the midst of an attack. With a few guards by his side he makes his way out of the castle escaping mysterious evil forces. This sequence serves as a brief tutorial where you learn the game’s basic commands, such as ordering your troops and engaging in combat.  However, the castle is eventually overwhelmed and the King narrowly escapes. The Kingdom has fallen, and the King, along with his trusted advisers, are tasked with rebuilding the kingdom, along with rescuing the seven princesses held captive by in seven kingdoms.

Gameplay and controls are quite simple to master. After his escape from the castle, the King finds himself with his advisers, who he rules from an old shack, in the midst of town full of carefree adults. These townsfolk can be recruited to become part of your Royal Guard, and can be assigned jobs to assist in rebuilding of the kingdom. In the beginning you can only recruit five of these carefree adults, who only have the ability to jump into holes to find treasure; however, as you find more gold, you have the option to expand your kingdom and build structures which gives you access to facilities that let you train these carefree adults into more useful positions, such as farmers, carpenters or soldiers. As the game progresses, and as you further expand your kingdom, you acquire more soldiers and better jobs to assist you in your quest to defeat the Devil King. 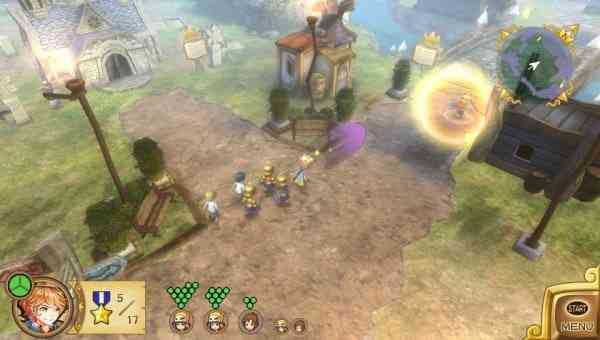 Your troops follow close behind you, in true Pikmin-like style. Commanding your Royal Guards, you can send them charging with the simple press of the “O” button. You can aim them using the right trigger button, and recall them with “Y” button. You can also switch their positions in the line behind you. It is not advisable to send a farmer up against an enemy when you have a group of soldiers right behind him! When setting out to complete a mission, strategically planning what classes to bring, and use, is key. A full group of soldiers will allow you to eliminate enemies effectively, but you won’t be able to dig up holes or build stairs.

Combat is simply a matter of sending your troops charging at the enemy. You also have the option to contribute to the fight, but you must be very careful here. The King is quite fragile, and one hit from an enemy usually means instant death sending you back to your castle to try again. There is also some light RPG elements in New Little King’s Story, with many missions and side quests to complete, areas to explore, and levelling up both your King and your troops. 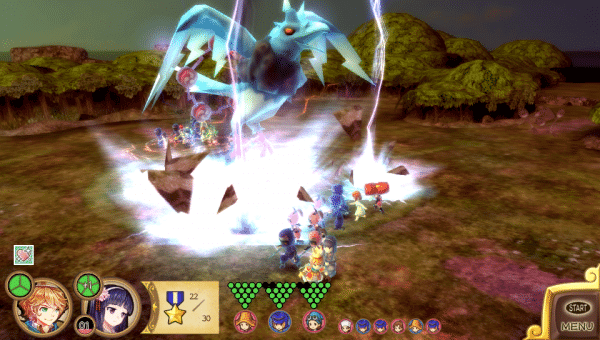 As I played I’ll admit that there were a few occasions where I was rather confused at what to do next, mainly because of the dialogue. At first I did skip through the dialogue because I found these sequences very difficult to follow. My eyes aren’t that great, but even with my glasses on I found the game’s font quite small and very difficult to read and follow along with. As well, perhaps it is the way it was translated from Japanese, but I found the conversations between characters to be downright strange. 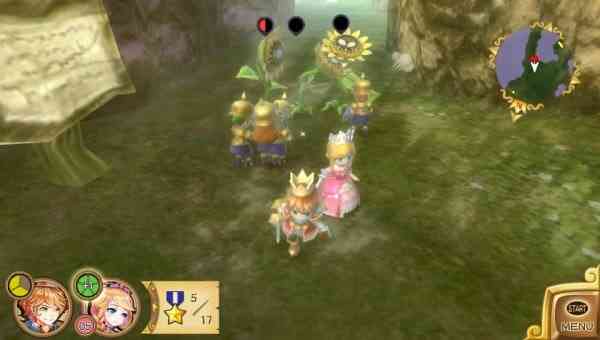 New Little King’s Story looks spectacular on the Vita’s screen. I really appreciated the colourful and vibrant visuals, and the cartoonish anime appearance is appealing to all ages. I was pleasantly surprised by the music in this game! Notable themes from classic composers like Tchaikovsky provided a charming soundtrack.

While my time with the game was fairly trouble free, I did note that it did suffer from a few technical setbacks. Noticeable slowdown when commanding a large group of units was prevalent.  I also noted that there were times when, despite directing my troops in the right direction, they would often charge right past it or return back confused.  These are not deal breakers but they are noticeable and worth mentioning to you.

Despite the confusing dialogue and minor technical issues, New Little King’s Story was quite entertaining, and I found myself highly engrossed in the game, exploring the map, and building my kingdom. With beautiful graphics, addictive RTS elements, and many hours of content, including future DLC, this game is one that deserves a close look by PS Vita owners everywhere.