I was excited to get my hands on The Golf Club. As good as the Tiger franchise has been, my fondest memories of playing golf games are still of playing Links and XSN back on the original Xbox. Made by Nova Scotia based developer HB Studios, The Golf Club is the closest thing to Links I’ve played since. Despite some flaws it can be an enjoyable, organic experience.

Make no mistake about The Golf Club, despite its stated focus on social elements and its course creator it is a decidedly simulation take on the sport of golf. Like the hardest mode in EA Sports PGA Golf games there is no power meter to speak of. Players are left to rely on their own estimation of power based on the full golf swing animation. If you want to hit a shot with 75% power you must visually gauge where 3/4’s is in the back swing and push forward on the right thumb stick to make your shot from there. The same goes for putts.

Accuracy is not only important for power but counts for physically performing the swing too. On any shot you can dial in things like loft, draw and fade by holding the left trigger before you swing. The more “english” you put on the ball the narrower the margin of error. This risk versus reward scenario will have though thinking twice about max’ing out your loft with your driver to take advantage of a strong wind at your back. You might just duck hook it right in to the thick stuff. It doesn’t get much more true to real life than that.

It is difficult but I love how this feels. Golf games rely on too any assists for my liking. Competitive rounds become too much about missing shots than they do about making really good shots. This is also far more representative of the actual game of golf. While it could be frustrating for some, avid golfers like myself don’t mind shooting 18-under every round. Making birdies and shooting par or below for a round becomes a challenge. 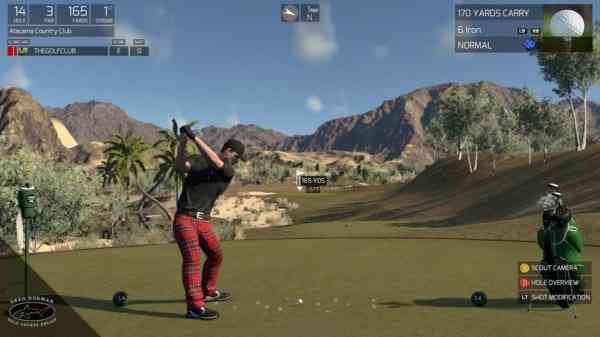 Beware though. There is a lack of tutorial or instructions in the game. You are left to figure things out for yourself. It’s all pretty logical if you’ve played other golf games but I can see how new players might find it frustrating. Anything I wasn’t too sure about I found on the developer’s very good blog and forums at www.thegolfclubgame.com. HB Studios has been diligent in keeping their site up to date with helpful hints and tutorials.

With the social focus of The Golf Club things like performance enhancements and equipment upgrades aren’t found here. I found this a bit disappointing at first but once I better understood the social focus I really didn’t mind it’s absence. Stats like driving distance, greens in regulation, fairways hit and number of putts are not only kept but measured over time. You can see where you’ve improved and what aspects of the game you may need to improve on. What you’re friends are doing or have done is always a click or two away.

Playing a round with friends has never been easier, even if they’re not available when you’re ready to play. With friends across several time zones I can’t always get online to play live with them. Whenever you play a round a ghost is saved for your friends to play against. Before any round you can choose up to three other players or their ghosts to play a round with. Ghost shots are shown in real time on screen so you can always see how the rest of your foursome is performing. I love this option. This is the next best thing and promotes competition and camaraderie at the convenience of your own schedule. Online tournaments and tour events can be searched, joined and created with ease. With no performance attributes to level up all players are on an level playing field. One drawback here is online events seem to be entirely open. While your character has a ranking based on your performance, there doesn’t appear to be any way of filtering or match making to create a more level playing field at the moment. 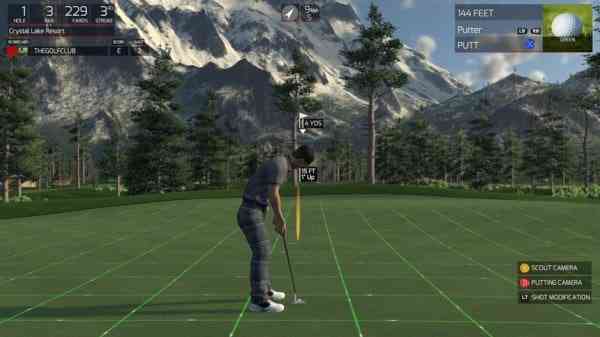 Several pre-designed, “official” courses come with The Golf Club and there are already plenty of user created courses available. The course creation tool is as robust or as simple as you want it to be. You can literally create a new course with just a few button presses if you want or you can dig as deep as you want into hole lengths, shapes, hazards, elevations and various other elements. A ranking system allows you to rate created courses and save favourites for play again. There’s already some pretty outrageous course designs out there. Check out Fuzzy Farm for a whacky experience. It’s sort of like the Little Big Planet of golf games.

Where The Golf Club can improve is in it’s presentation. It doesn’t look bad but I was hoping for more wow factor visually. There are several graphical hiccups including screen tearing when there is any vertical scrolling and many clipping issues, especially when making shots in close to objects in the environment. There are also a lot of frame rate hiccups. None of this impacts your swing performance while physically playing the game. Its most noticeable when following the ball’s flight and putting. It should be noted HB Studios has already addressed these issues on their website and are currently working on a patch to fix them.

The swing, impact and ambient sounds of being on a golf course are all don’t expect any broadcast quality announce teams like you might see on a CBS or Masters TV coverage. Instead you are treated to a dry witted announcer that sounds almost as if one of the game’s developers dubbed in some of his own commentary. The strange thing? After a bit of getting used to it the resulting effect is like what you’d hear from one of your buddies during an actual round.

I wasn’t sure at first but eventually I really warmed to The Golf Club. At the end of the day, game play trumps presentation here. Excellent swing mechanics make the actual act of playing golf in The Golf Club quite enjoyable and the social and online features are abundant and fun. These things outweigh the technical hiccups.