The Elder Scrolls Online (PC) Review – One of the Biggest Disappointments of 2014, So Far

Massively Multiplayer games have existed for many years, but in 2004 Blizzard’s World of Warcraft turned the genre squarely on its ear. Challengers such as Guild Wars, The Old Republic, and Final Fantasy XIV have tested their might and been well received, but none have yet been able to topple Blizzard’s juggernaut. The Elder Scrolls Online (ESO) now steps into the ring, armed with 20 years of Elder Scrolls lore, 5 years of development, and a $15 monthly fee. Does it stand up to the titans of the genre?

The last Elder Scrolls game, Skyrim, has achieved cult status in the gaming community. It consistently sits among the top 10 games on Steam, has a gargantuan modding community, and owns a Metacritic score way above 90. Those are big shoes for any game to fill, especially considering Elder Scrolls Online’s roots – a completely different development team, and a development cycle that was partially parallel to Skyrim, limiting the team’s ability to build on Skyrim’s successes. Unfortunately, the aforementioned shoe filling is incomplete in ESO, very much akin to a child stomping around the house in his father’s loafers. 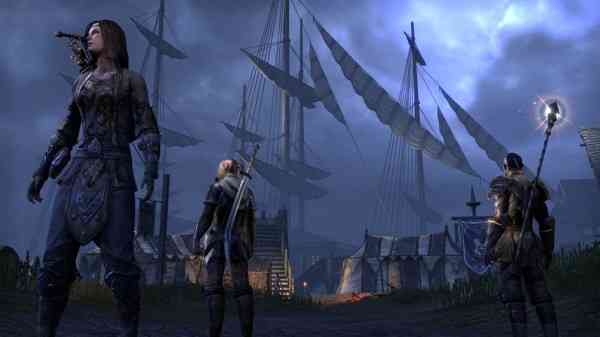 Much like other series entries, the game begins with a prison break – this time from the Daedric realm of Coldharbour. Molag Bal, the Daedric prince of domination, has imprisoned your soul and after undertaking a few tasks to free The Prophet, you’re returned to Tamriel. Sadly, any sense of grandiosity or meaning is completely lost right out of the gate. Why? The Elder Scrolls Online suffers from a complete loss of the immersion that is a cornerstone of the series. The game constantly insists that you are the Vestige: the chosen one, the last ray of hope. Every other player is too, and that simple fact butchered any attachment I had to the storyline. I spent the vast majority of my time with the nagging feeling that the game would be more enjoyable as a single player experience. It’s sad, because the 3 worlds are quite dense with people to talk to and to complete quests for.

The writing itself is competent, especially considering the volume of dialogue and lore present in the game, while the voice acting is generally a strength. There are mountains of written content to be found on bookshelves for those so inclined, while the big name voice talent adds some much needed variety to the characters. Much like previous Elder Scrolls games, the lion’s share of characters are voiced by a very small group of actors, but I didn’t find it as noticeable or intrusive as I have in the past.

Players have a choice of three factions when creating characters, with a group of races associated with each: the Aldmeri Dominion (High Elves, Wood Elves, and Khajiit), the Daggerfall Covenant (Bretons, Redguards, and Orcs), and the Ebonheart Pact (Nords, Dark Elves, and Argonians). Each faction has unique quest lines along with unique environments, but share many common quests too – the Mages Guild and Fighters Guild have identical quests in each faction.

Character classes are refreshingly open in ESO. Choices include Dragonknight, Templar, Sorcerer, and Nightblade, but there is room for remarkable customization. Each class has its own tree of skills, but all other trees are completely open. Want a greatsword wielding mage? It can be done, and feels natural doing so, but only to a point. Dungeons are typical MMO fair, complete with chat messages from other players “looking for a healer” or other traditional character build. Painting outside the lines of the traditional group structure – Tank (bullet sponge), DPS (damage dealer), and healer – although fun, can be frustrating when grouped up. 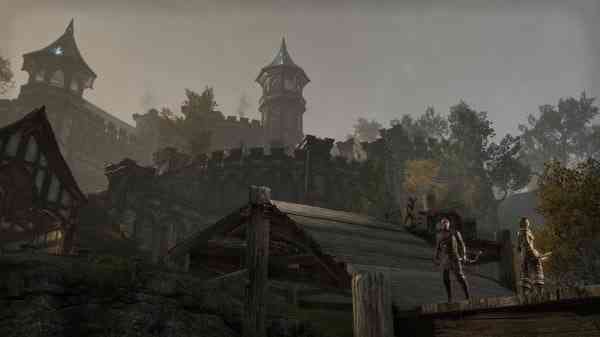 The game world is a mixed bag. On one hand it’s nice to see such a broad range of areas built into the game, but they all feel generic. Where areas of Skyrim and Oblivion carried unique atmospheres, the lands of ESO feel like endless seas of the same few buildings. The characters, textures, and world geometry look good on a high end machine, though the designs somehow lack soul. It’s also obvious that most areas were designed for function, not form. Huge open spaces are common to accommodate vast numbers of players, but make little logical sense. Tiny towns such as Eagle’s Strand have absurdly large plazas that no settler in their right mind would construct. To be honest, without the branding and constant dropping of Tamriel buzzwords, you’d be hard pressed to tell ESO from any other generic MMO.

Fortunately, the music is a little more distinctive. The Elder Scrolls theme trumpets loudly and effectively during epic moments, and the atmospheric music is smartly implemented to create mood despite the repetitive nature of the world.

At least there are lots of things to do – each of the three factions covers a large chunk of Tamriel, and quest givers are everywhere. The masses of players then completely remove any illusion of exploration or discovery. Finding a locked chest would be more exciting if 15 other people weren’t standing around waiting for the same object to respawn. As one might expect, there are a fair number of “MMO Special” quests – gather 5 roots, kill 4 guardians, extinguish 6 fires – but there are a select few that provoke some thought. One such quest involved a betrayal resulting in a haunted castle – I had to choose whether to purge the ghosts or forgive a man for his ancestors mistakes – not a simple choice. Quests like that gave me hope for the future of the game, but the vast majority of quests are meaningless and repetitive, clearly being designed as tasks to complete as you grind your way through skill trees and experience points.

As you level, you’ll end up killing a lot of things. Like the rest of the game, combat tries to walk a tightrope between MMO combat and traditional Elder Scrolls fare. That lack of commitment has resulted in a strange hybrid that looks and acts like an Elder Scrolls game, but functions like an MMO. I’ve primarily been playing in third person, like an MMO, to avoid trying to ‘Skyrim’ my way through the world. The dice rolls are hidden but certainly present, and combat tends to feel floaty and imprecise. Playing from third person ends up feeling less clunky, and gives a better view of the surroundings. Massive skill bars are nowhere to be found: you’re limited to 5 skills at a time and it’s not feasible to change during a battle, which feels like either a gross oversight or a concession to the console versions. 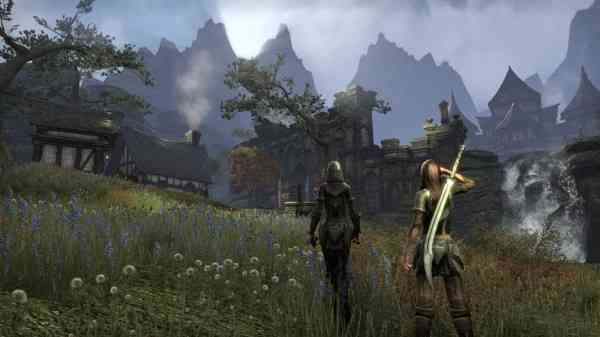 After level 10, ESO’s competitive side opens up. The Alliance War pits the three factions against one another in player vs. player combat. PvP fans will enjoy it, as epic battles crop up frequently, and the three sided faction system provides some interesting tactical play. However, it’s not ground breaking, much like the rest of the game.

Execution is key when the world is populated by millions of other characters. It isn’t good here. Expect to wander around for a while looking for the people you want to interact with – NPCs aren’t clearly marked, and when 50 people are clustered around the blacksmith you want to sell things to, it quickly becomes irritating. Even subtle modifications to the UI make things worlds better, and thankfully the dedicated Elder Scrolls community has started to build some useful enhancements, which are natively supported by ESO.

There are aspects of The Elder Scrolls Online I like. The lore, world scale, and interesting quests are all good, and are the most Elder Scrolls-y. The parts I dislike are where they’ve tried to shoehorn an MMO into the mix. The combat, level grind, grouping, and people all discourage me from wanting to play. The MMO components feel forced and generic, and the game would be more enjoyable without them. This comes from an Elder Scrolls fan though. People who love MMOs and are looking for a new level cap to aim for, or a new PvP arena, will probably be perfectly happy. For Elder Scrolls fans and more casual gamers though, The Elder Scrolls Online is mediocre and lacks the wow factor (pun intended) required for it to run with the titans of the genre.

Next Mario Golf: World Tour (3DS) Review – Drive, Chip, and Putt in the World of Mario & Crew Once Again
Previous Contagion (PC) Review – Zombies… in a Game? What a Surprise!