Tenkai Knights: Brave Battle Review – About as Bad as a 3DS Game Can Get

The first two things that I was reminded of when I saw the cover for Tenkai Knights was Medabots and Power Rangers. A team of four robotic heroes each sporting a single main colour…how could I not be reminded of those shows I watched as a child?! Although it did remind me of my enjoyable childhood shows, I hoped it would excite the child in me again with some awesome action or admirable characters. Unfortunately, that hope plummeted as soon as I started the game.

Tenkai Knights: Brave Battle is based off the anime series that focuses on four boys who stumble upon an inter-dimensional portal that majestically transports them to the world of Quarton. The little twist is that when they’re transported to Quarton, they re-emerge as the robotic Tenkai Knights. Being part of two worlds they now must prevent Vilius, the antagonist with a hefty army, form destroying not just Quarton, but Earth as well. 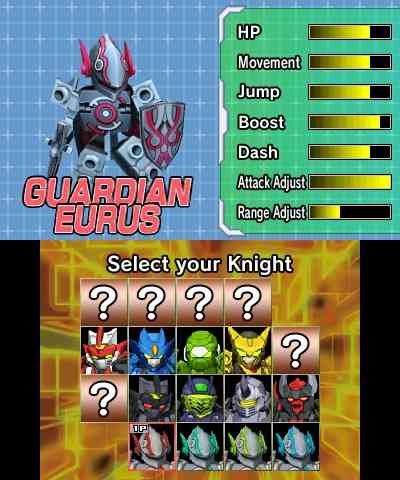 The story is acceptable. Nothing crazy or horrible, but the way the story is conveyed is far from being fluid. It feels rushed and is hard to indulge in with the quick images and text guiding you through a quick summary of what is occurring. With that said, reading is somewhat required to understand the story as not everything is read aloud. After the quick summary, you go straight into a battle to kill off a certain amount of enemies or collect materials. Stick to the anime if you want to enjoy the story.

Aside from the story in Mission Mode of the game, there are two other modes – Versus and Customization. In Versus mode you have a choice between Rumble Battle or Versus Battle. Rumble Battle is a free for all battle online with friends or with some AIs. Meanwhile, Versus Battle is where you can vs. a single friend or AI. Whichever you choose, you’ll pick a character to play as and also vs. (if they’re AIs) then pick a map to battle on. Customization is where you spend your collected materials from battles to build or customize your weapons, shields, and back units. The items you can build and customize are quite detailed and there’s plenty to choose from. Customization mode is surprisingly the one thing that feels complete and had some attention on.

The combat system and maps have no depth or detail whatsoever. Combat feels the same for all the characters with almost identical animations. Unless they are ranged, they all feel like the same character just with a different armour color. They all have the same move sets: jump/hover, guard/block, and a weak, strong, and special attack. Maps are barely tweaked or edited that it’s completely obvious they weren’t made from scratch, but all based off one single map. AIs are just horrid and just run at you or frantically attack while doing so. The battles are painfully boring and unexciting with the mindless repetition of attacks. The game plays out more like a prototype for a game in development and not one that should have been released. 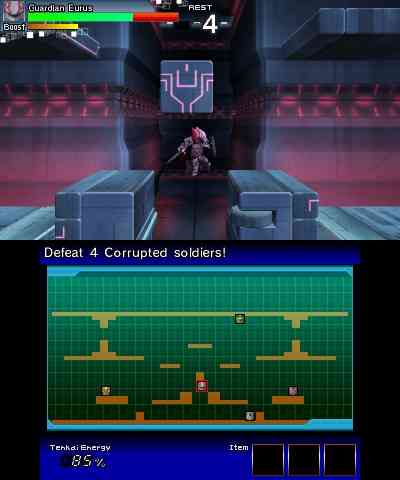 The animations are smooth, but there’s just nothing exciting. Everything is just too similar to one another with no excitement or difference as you progress through the missions. What you start with is what you end with. The only perk is the customization mode where you can make the game a tad bit more interesting and eye-pleasing with new weapons and equipment. Maps change only based on the background image and minimal editing of platform positions. It’s much too bland.

Sounds in the game are sufficient, but still far from praise-worthy. You can barely hear the voice acting in mission mode as it seems to have been transferred from the anime itself. The music in the menu or maps felt, again, to similar to each other and just blended in with the sound effects. The sound effects do their job at bare minimum as they sound like something I can grab online to add to my own homemade creation. In fact, the sounds were annoying as they are so repetitive that I enjoyed playing the game more without sound.

Unless you are looking for a game that feels like a prototype than a full game, I strongly recommend you invest your time in the anime before you pick up Tenkai Knights: Brave Battle. This game is meant for the fans of Tenkai Knights, and when I say fan, I mean a die-hard fan. Even then, I doubt any hardcore fan would find many redeeming qualities with this junker of a 3DS game. 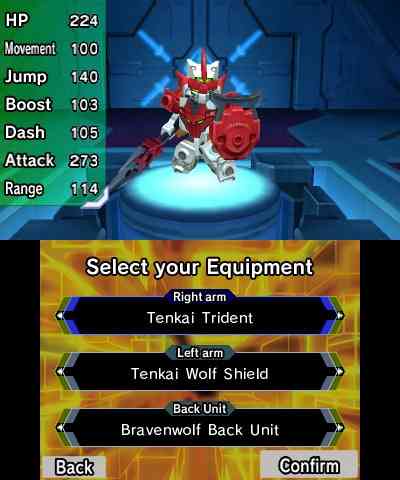