Many would argue F1 represents the pinnacle of auto racing. It features the highest, bleeding’est edge of racing technology of all the auto sports. So I must admit I find it a bit ironic I’m reviewing the official game of this race series on past generation hardware. Codemasters has been open about the fact they are developing new engines from the ground up which is part of the reason why F1 2014 isn’t on any of the new consoles. Regardless of platform, the result is still an enjoyable homage to the sport of Formula One.

As this series appears to be reaching the end of its life cycle on what are now past-generation consoles the focus seems to be on accessibility. F1 2014 doesn’t bring a ton of new features over last year’s title but one of the things I appreciate most in 2014 is the fact that you can now begin your career on any team. In past games, you were shoe horned into one of three bottom tiered teams in career mode and forced to work your way up to the upper level outfits. That’s great for purists and those who have the time to dedicate themselves to this sort of career mode but not for many other players. 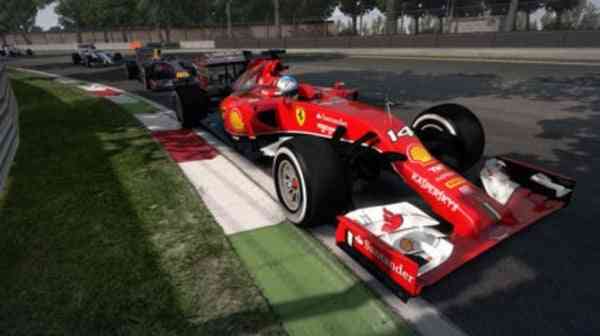 Modes like time attack and scenarios (where you can play out race situations based on recent events) round out the single player offering. Multiplayer includes Codemasters historically strong online support of 16 players (plus AI to make a full F1 grid) and split-screen play. This is a welcome feature considering how few games offer split-screen racing any more.

Different than most every other annual sports game, F1 releases at the end of its season rather than at the beginning when one might expect to take advantage of bigger sales. This is due to the fact that teams, liveries and cars aren’t introduced until sometimes weeks before the new season begins. The development team needs the time to integrate all these new things into the game, including any new circuits. New circuits this year include Sochi, Russia and a return to Austria and the expanded and renamed Red Bull Ring. This isn’t necessarily relevant to any review score I assign here but an interesting fact nonetheless.

After playing a lot of Forza Horizon 2 recently, returning to a game like F1 is almost like a slap in the face. That’s in a good “wake the f#!k up” way. The almost surreal sensation of speed and twitchiness of these cars is immediately apparent and even on lower difficulty levels this isn’t sacrificed. While F1 performs its own assessment of your skill the first time you get behind the wheel and recommends a difficulty setting, there are plenty of assists to customize your racing experience. As an interesting aside, going back to the 360 and playing F1 for this review also revealed to me how unsubstantial the force feedback in the Xbox One’s controller triggers really is. I didn’t notice not having it. Perhaps that was because I was reminded about how damn good that 360 controller feels in my hands. 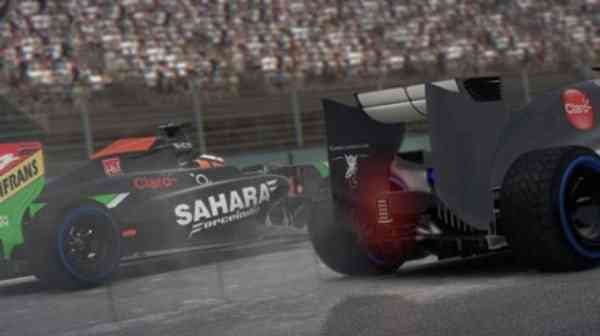 Codemasters has always set the bar high when it comes to presentation in their racing games. Even going back a generation applies here. F1 2014 looks good enough that it reminded me that the jump in visuals to the current generation is nowhere near as dramatic as the transition to the past generation of consoles. The sense of speed is fantastic and it has to be to properly represent the sport. Watch an onboard cam on an F1 car. Things move faster than what seems comprehensible to process mentally. There is no better example as driving a hot lap at Monaco. It is as violent as the track is tight. F1 2014 translates that experience well. In comparison, lapping at the Autódromo José Carlos Pace (home of the Brazilian GP) eschews that violence for a flow that can almost be described as organic in its smoothness.

While I don’t normally have a ton to say about the sound in driving games probably the biggest difference compared to previous games is how the engines sound. Much has been said about the new V6 engine notes. Even F1 drivers have expressed their dislike. No longer do F1 cars have that characteristic scream that fans will have grown accustomed to. To me the cars don’t sound as fast as they used to. I’ve always spoke highly of Codemasters’ attention to detail and this is a testament to that.

The attempt at accessibility is welcome but F1, by its very nature, isn’t really a sport for the casual fan. It is extremely technical and the learning curve of not only driving but competing during a full race weekend may frustrate players who just want to jump in. Hardcore fans may lament the lack of compelling new features but I applaud Codemasters for not rushing to deliver a subpar product on new consoles. Even on now-dated hardware, F1 2014 is still a pretty solid racing experience and a good representation of the sport but I’d be remiss if I didn’t say I can’t wait to see what F1 looks like when it hits the latest consoles.

Next Majestic Nights Review – A Disappointing Miami Vice Meets The X-Files Crossover
Previous Tenkai Knights: Brave Battle Review – About as Bad as a 3DS Game Can Get