Supreme League of Patriots Review – From Pop Culture to Politics, No One is Safe

Supreme League of Patriots is a three part Point-and-Click adventure game about becoming a superhero, breaking the 4th wall, and openly mocking religion and politics as if some mom ISN’T going to flip her lid after looking at their child’s computer. I felt absolutely evil for laughing at jokes that poked fun at moral values, gay people, and any other remarks that made this game offensive but hilarious… if you’re liberal minded like me.

In SLOP (yes, those are the initials), you play as Kyle Keever, an unemployed actor looking to make it big. He lives with his old friend Melvin, the generic and very British sidekick. Melvin is always there to give a helping hand, and leave a witty comment about every… single… thing that happens. While his remarks can be there for comedic relief, it soon becomes a tired “I’m British, everything I say is funny” scenario. Sometimes the game forces you to turn to Melvin for help, and he’ll just predictably insult some pop culture reference. Kyle sees his golden opportunity on the TV show “America’s Got Superpowers”. He garbs himself in a very patriotic outfit designed by the adopted son of Uncle Sam and Captain America himself, and the “Perfect Patriot” is born. Unfortunately, he accidentally runs his suit through the hot wash, and the Perfect Patriot is quickly replaced by the “Purple Patriot”. 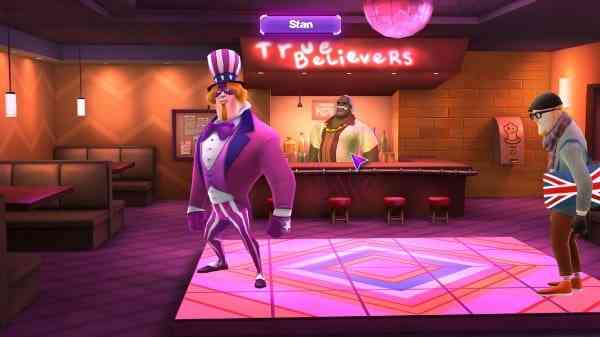 “Born out of the ashes of a bad wash cycle the Perfect Patriot is reborn as the blundering Purple Patriot.”

Early into the game you obviously get some brief insight about what you’re getting into and it exposes one potentially huge flaw. It has, hands down, some of the most meticulous missions I have ever had to go through. What do I mean? At the beginning, there is one mission that involves printing a map, and leaving the building. I walked in and out of two rooms for 45 minutes looking for the printer until Melvin had to chime in and tell me that he already had the map, and we should go. Call me an idiot, but I’d already tried clicking the door a million times and each time he would mention that we can’t leave without a map. No, you have to CONFIRM that he has the map, and then you can leave. Remember that part in Super Mario that involved signing a waiver confirming your hat was red before you could start your adventure? Me neither.

With the mystery of the missing map solved Kyle then runs through a series of tests in front of some heavily inspired judges. Now, here’s the best part. Every time Kyle does a test, it backfires and he ends up seriously hurting himself on the head. Result? He starts to believe he really is the “Purple Patriot” as he develops multiple personality disorder.  He becomes the ultimate superhero of patriotism and somehow, his brain is just so hypnotized by this transformation, he learns to fly and gains incredible super strength and speed (I THINK CAN, I THINK I CAN!). Unfortunately, this speed is not shown in the Kyle’s painfully slow walking animations. 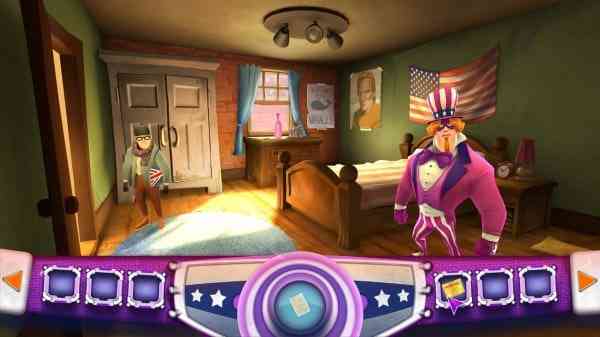 “It’s a charming, short series that you can play in your spare time, or even binge-play just to get through. Each of the three episodes is about 4hrs long.”

Speaking of animations, every spoken word by the characters has its own mouth animation.  I like to think that maybe, just maybe the developers spent so much time on the dialog and mouth animations, they forgot about the arm and body animations. A lot of times, the movements were glitchy or just plain awkward. It was almost distracting me from the actually good storyline. Every character had flaws. For some NPCs, it was just this awkward tilting-to-the-side animation that just looped. It really made for an image of imperfection.

As with most games like this the dialog was extremely well put together, and you hardly came across a time when you would hear repeating sentences from the characters. The NPCs didn’t normally move from the spot they were in, but it almost made things easy so you didn’t have to hunt someone down to finish a mission. This game isn’t exactly up there with the greats, that being said, it’s almost part of its own genre. Not exactly Adventure, but not exactly Point-and-Click. It’s just a charming, short series that you can play in your spare time, or even binge-play just to get through everything as fast as you can! (Each part is about 4 hours long; you could do it in a day) 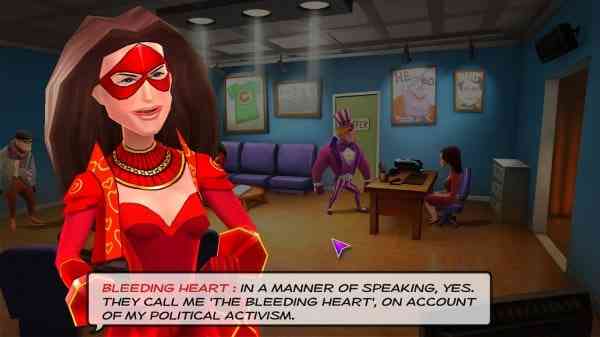 “A lot of the thoughts and opinions in SLOP are horribly non-PC. If you’ve got a sense of humour of course this is all easily appreciated.”

I mentioned missions a few times which revolve around fighting crime and scraping the villain scum off the streets of NY by doing what is right for your city! Or at least what the Purple Patriot thinks is right, and he thinks women are inferior to men, so I definitely (/sarcasm) support whatever he’s got to say. And while I mention that, I really try to emphasize that a lot of the thoughts and opinions in SLOP are horribly non-PC. If you’ve got a sense of humour of course this is all easily appreciated.

Graphics wise the game is really quite stunning despite the awkward character animations. They’re colourful, almost like the characters are all covered with an array of bright paints, creating a cartoony, but also very beautiful and detailed look. While the backgrounds aren’t in 3D like the characters, you can spend a lot of time looking around them at certain spots and you’ll get a nice look at some extra details. It’s easy to enjoy the nice visuals in this game. From time to time, you’ll see a comic book style effect, which says KAPOW or something, which really makes for a comic book feeling. 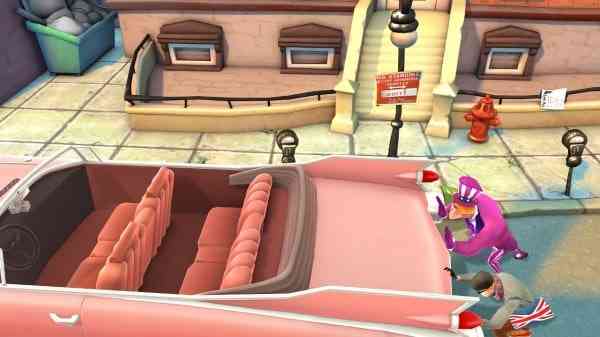 You can tell a lot of work went into the music of this game. Right from the beginning, you get to hear the Bow-Chicka-Wow-Wow style music. If it weren’t for the Obama jokes, you’d believe this game was from the 80’s. The voice acting is impressive and while often voice actors in video games sound like they have no idea who they’re playing, these ones really hit home with their characters and the situations they’re in. They get excited and depressed in all the right places, and their tones almost make the game more immersive, in a way. The sound effects weren’t very realistic, however. It’s almost like they were from one of those free sound effects websites. But if I’m going to comment on sound effects I’d have to mention that throughout the entire second episode of SLOP, the Purple Patriot wore shoes with little bells on them, so when he stepped, he made a tinkling noise. Tee Hee.

I loved playing through all three episodes of SLOP and the way I see it a game shouldn’t be any less fun if the graphics or animations aren’t exactly on point. If you’re looking for a side game, or a couple cheap laughs at the expense of Melvin’s remarks, I recommend this game. It’s charming and it’s got a lot of great things going for it. 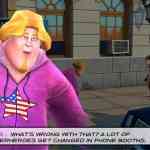 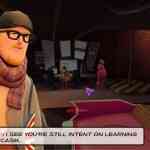 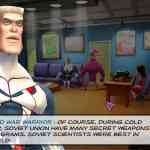 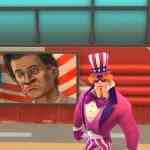 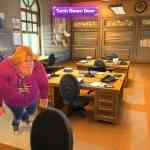 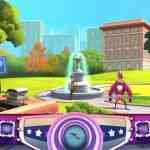 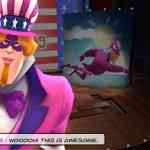 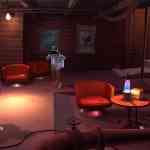