We’re back in high school, and the world is in shambles. World peace has been achieved through the power and accessibility of self-help books, and then lost again to corruption and evil. Students and faculty are disappearing from the dreary halls of Water Falls High School and textbooks have turned into black market commodities. The classrooms are on lockdown and nobody knows what to do. Enter: Daryl.

Rising from the flames of a successful Kickstarter campaign and winning multiple awards before the game even launched, is Super Daryl Deluxe; the first game from indie developer duo Dan & Gary Games. Our hero is Daryl Whitelaw — a skinny, mouth-breathing, bell-bottom-clad, Napoleon Dynamite-esque dope who plays the new kid in school and fights bad guys for lunch money. Falling into the wrong crowd almost instantly, we find ourselves slinging textbooks in exchange for knowledge on how to be popular and powerful, learning to fight our way to the root of the dark danger that threatens the school.

Super Daryl Deluxe is a third person RPG with customizable, brawler-style combat that caters to any play style, whether you prefer slow, heavy strikes, ranged attacks, or fast, chaotic assaults. Through 15+ hours of gameplay, we battle ridiculous enemies like gigantic gorillas and “tuba ghosts” against wildly creative backdrops that perfectly encapsulate the “doodled-into-the-margins” style that many games have tried to achieve (e.g. Life is Strange and Drawn to Death.) 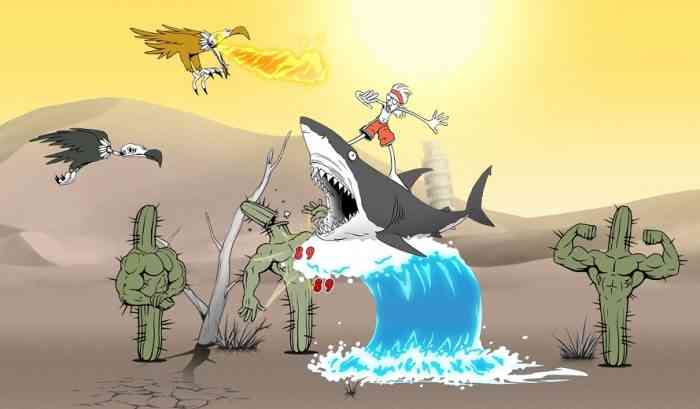 While the halls of Water Falls High are achromatic and humdrum, we quickly see that this is anything but your average high school experience. I mean, for god’s sake, the coolest and most popular kids in school are mega nerds who excel at a pretend-fantasy game called Dwarves & Druids, or D+D. We meet dozens of characters who are quirky in their own way and drawn in caricatural style, complete with their own lockers that we can break into and loot. The sarcasm and humor of the creators shine through sassy dialogue and small details such as posters and strewn newspaper pages, adding a remarkable entertainment value that resonates well with the player.

The hallways may be intentionally lacking in liveliness, but the classrooms are truly where the game comes alive. Each classroom in the school features a different subject and displays radically imaginative art to reflect their themes. In the science lab, we enter a dimension that looks like the inside of a multicolored Tron set and battle anthropomorphized beakers and flasks.

In the Music & Art room, we see enormous instruments placed next to random tableaus like Georgia O’Keeffe holding a bull skull, or Beethoven chillin’ next to a speaker blasting a badass electronic remix of his Symphony No. 9. The platformer levels are satisfying in length and delightfully creative. 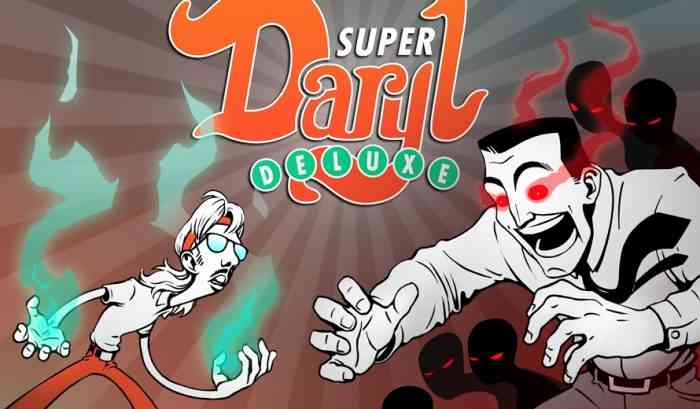 The gameplay itself is rich and fulfilling. There are 46 unlockable combat skills and 17 passive abilities that allow strategy for chaining together attack combos, not to mention a sizable heap of side quests to keep you busy for hours. There are also tons of clothing items with armor ratings and health boosts that can be collected and used to adorn Daryl. Aside from boss battles, the standard enemies do not have many variations in counter attacks and do not provide tactical challenges outside of their leveled damage points or health capacities. Something to note is that the game does not have an autosave feature and Daryl must instead take a leak in a bathroom to save. While bathroom stalls are provided in numerous locations, the absence of autosave or the scarcity or oversight of a bathroom can make for a frustrating experience where you’ll find yourself respawning and having to gather all your most recent quests or unlocks all over again.

“Super Daryl Deluxe masterfully combines the outlandish qualities of a graphic novel with the fun and ease of a classic arcade game.”

Overall, Super Daryl Deluxe masterfully combines the outlandish qualities of a graphic novel with the fun and ease of a classic arcade game. The soundtrack is enjoyable, although it is scarcely distributed and we mostly hear the same flat song played throughout all the main hallways where we spend much of our time. The character movement is light and fast and all of the controls are simple. Daryl is the funky, sweatband-wearing hero we need, and Super Daryl Deluxe is the eccentric high school experience we so righteously deserve.