There is something incredibly familiar about this game. Mind you, I’m making this observation as someone with a mere four farm games under their belt. It seems like somewhere along the line, a hard set of rules was established by cute, casual farming sims. And yet, I am hopelessly addicted to Story of Seasons: Pioneers of Olive Town. It turns out I don’t want new farming, I just want more farming. If this sounds appealing, you are going to love this game.

Olive Town’s story is the story of every farming sim you’ve ever played. Your grandfather left you a farm! It looks like hot garbage! Your new dating pool is smaller than a high school science class! You know, the usual hopeful song and dance. Like always, the mayor is pounding down your door to shove cheap tools in your hands and teach you how to chop down trees. It all moves with breathless ease.

Song As Old As Rhyme

An important disclaimer or two: first, this is the first actual Harvest Moon game I’ve ever played, and second, Story of Seasons is what used to be Harvest Moon! The new games using that name? Totally different thing. Confusing, I know. Anyway, my lack of official experience means that certain innovations feel fresh, when maybe they’ve been around for a decade or more. As such, little fixes like tool upgrades being instantaneous leave me pretty starry-eyed. On that note, everything moves so fast in Olive Town.

Beyond the aforementioned tool upgrades, moving from stone to iron to silver happened in a flash. In a single in-game month, you go from a plodding pace to a blistering one. Mining, planting, chopping, crafting, manufacturing, and harvesting all get dumped on your head in a couple of hours. If nothing else, you will never be bored. Also there’s cooking, courting, and house expansion. There’s more, but you get the picture. Some major construction projects run overnight, but a bigger house? That happened in a snap. Same thing with tools and farm facilities. You get the materials and that thing is instantly finished. It’s terribly convenient. 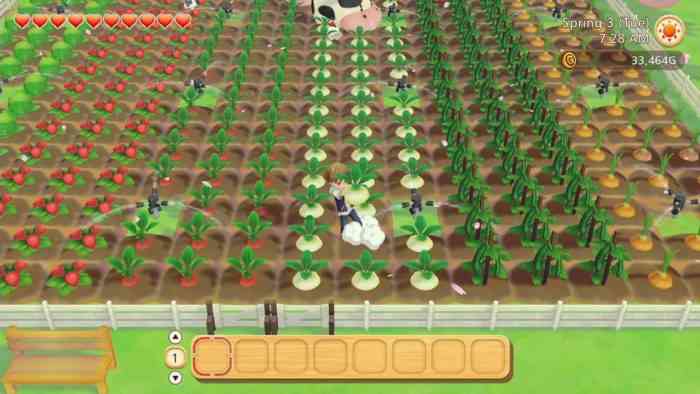 One of the tiny quality of life boosts I’ve latched onto is the tool bag. It’s just a separate space for essential items, but it’s been a genuine life saver on multiple occasions. Your inventory might seem full, but you put away your hammer and suddenly it’s not? The downside is that you’re doing a lot of inventory juggling, but it beats hoofing it back to the nearest storage box to do a drop-off. Even being able to craft multiples of things is a huge relief. This might not extend to the maker stations, but those are a different story altogether. The breezy, convenient gameplay is so good in fact, that it makes you forget about the aesthetic design.

I fell in love with the gameplay loop immediately. But I did so in spite of the music, and to a lesser extent, the graphics. I’ve never had the soundtrack to a farm sim click with me, but somehow these songs go a step beyond that. I recognize this as a purely personal grievance, but the overworld music truly bums me out. These are the the time signatures of lingering doubts and sober second thoughts. The visuals managed to win me over after a little while, though the character avatars on the map screen give me serious mobile game vibes. Again, this is all garnish to the succulent meat that is the gameplay loop.

Good Soil Under All Of That

While there is a whole section of this game dedicated to getting hitched and starting a family, I haven’t really gotten to it. Not because I don’t have the time! No, I just don’t play farming sims that way. Who’s got time for romance when you could be making the best, the biggest farm in Olive Town? There’s tree chopping to do, animals to tend, rocks to shatter, and progress gates to open. Sometimes two whole in-game years will breeze by before I remember that other people live in this village I moved to. But if romance is your thing, there’s plenty of options! The items needed to start dating and eventually propose are on sale in the general store from the very beginning. Like every other system, you can put the pedal to the metal on your love life, if you’re so inclined.

Farm sims, at least the cute and casual ones like Story of Seasons, fall into a comfortable groove. You know what you’re getting into when you fire up one of these games. Pioneers of Olive Town is no exception. Yet, is that really so bad? If these kind of chop/craft/till/harvest/date cycles appeal to you, Olive Town will be just the dose you’re looking for. The game loop is well-crafted, the systems are polished to a glittering sheen, and the pace is downright swift. On the other hand, if you’re sick of the usual farm sim routine, this isn’t gonna win you over. We’re in well-trodden territory here. But of you’re anything like me, more adorable farming is exactly what the doctor ordered. 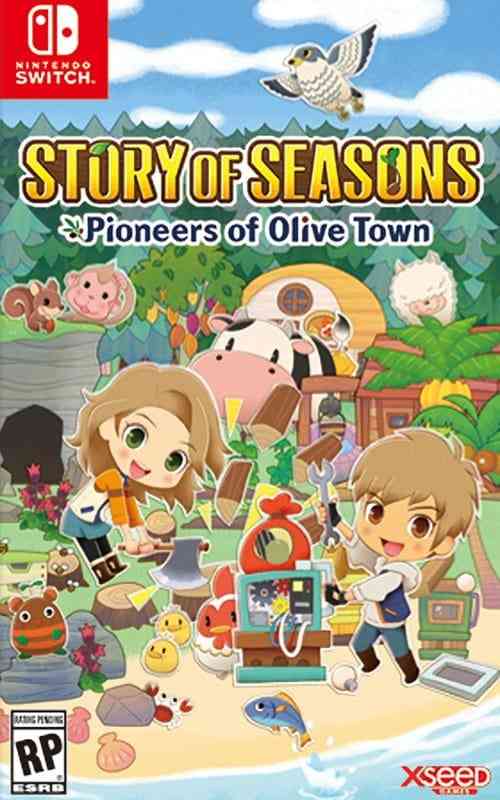 
What’s the Deal With Bayonetta 3? Well, it Exists

Xbox Won E3 2021, and It Wasn’t Close
Next RetroMania Wrestling Review – For The Love of Wrestling
Previous Black Legend Review – Not Legendary Enough