Story of Seasons Review – A Solid Farming Experience for Your 3DS

Known as Bokujo Monogatari in Japan and Harvest Moon here in North America, the series has been around since 1996 delivering a farming simulator many have come to love. Only this time around, the Harvest Moon name is nowhere to be seen in this instalment. Before you panic, let me assure you of something – Story of Seasons is a solid entry in the Harvest Moon series that improves its well-known and classic formula. How? Let me break it down for you.

The game starts with the creation of your character. You can choose the eyes, hair, clothes, and various accessory styles for your character making it have its own uniqueness courtesy of you. When finished your character creation, you learn that you want to leave the city life by applying to work as a farmer in the countryside. After applying, you get a call back and get accepted to work and reside in Oak Tree Town where your new life will start. The start of the game acts very much like an introduction so it may be slow for returning fans of the series and even new players, but there are some new features that you don’t want to miss out learning about and just new characters to get to know about as well. Throughout the game, you’ll live a farmer’s life by maintaining various things on the farm and also fulfilling requests. You’ll interact with other NPCs that are sometimes farmers themselves who give you tips and tricks to make your farm the best it can be. The game expands the more you progress and also when more days pass letting you learn and participate in more activities and features.

A very distinct memory I have is being addicted to Harvest Moon: Magical Melody back on the GameCube. If you asked me why, well, like most Harvest Moon players it’s figuring out and getting into a routine that fits your play style. Growing crops, caring for your animals, having relationships blossom, and making the town you’re in thrive with some limitations like time and stamina are the elements that make up the Harvest Moon formula and make a return in Story of Seasons. However, little tweaks to it have been made here and there to make gameplay more efficient and customizable.

The ways you tend your crops and care for animals haven’t changed dramatically – you still water, feed, and love them until they are ready to be harvested or collected from like in past instalments. However, you do get a 3×3 grid to tend your crops with whether it’s watering or harvesting them making it more efficient and easier. A bonus and exclusive to Story of Seasons is that you can grow Super Mario themed crops – Yes, that means you can grow things like super mushrooms and fire flowers. Cool right? Be careful though, crops do not carry over to the next season so harvest them before the season changes or they’ll wilt and die. Later in the game you’ll have your own plot of land in which you can choose what gets built and goes where. A second house, coop, barn, or even your own shop – whatever it may be, it’s totally up to you. It’s your chance to get creative.

Renting farms to grow certain crops better and visiting a wildlife safari to fish, mine, and bring your animals is also available. It’s sort of a little paradise for you to spend time in. You can interact with other shops, buildings, and NPCs in town to sell items or just access some dialogue to read up on. Like past instalments, you can get married to available bachelors if you’re a female or bachelorettes if you’re a male by fulfilling certain requirements to fill up a heart meter.

Story of Seasons has a big focus on connectivity whether it’s through other “countries” within the game or online with other players. For example, when you have gathered some output from your farm such as eggs, milk, etc. instead of selling them at a shop, you can use them to fulfill requests at the trade depot from other countries or people in the town. You also have the option to purchase items from other countries or people in town as well which makes obtaining certain items much easier. Requests are always changing depending on the day, time, and season so it’s a good idea to check it from time to time.

In terms of playing online, you can choose to visit someone else’s town or have others come over to yours whether they’re on your friend’s list or are random people online. Up to 4 players can be in a town at a time in which you can all farm to your heart’s content. A nice feature about playing online is that you can type messages and use emoticons to other players making interacting and communicating with them a breeze.

Story of Seasons is presented with 3D models and also a visual novel style layout when interacting with key NPCs. Aside from clear sunny days it rains and snows giving realism and a dynamic environment to the game. The art has a classic painting style to it giving it an olden day look. It matches nicely with the tone and aura of the game which makes it visually pleasing.

While there’s no voice acting in Story of Seasons, the music does an excellent job giving life to each season and different activities you participate in. The music changes per season making each season unique. Meanwhile depending on the activity you’re partaking in, the mood changes as well.

Overall, the classic Harvest Moon formula continues to thrive in Story of Seasons with some new features and touch-ups to keep it entertaining and enjoyable for fans. The amount of customization, emphasis on connectivity, and improvement on familiar activities present in past instalments are features that make the game a solid instalment in the Harvest Moon series. The beginning of the game is quite slow and, of course, the farming simulator might not appeal to everyone, but you might be surprised to find out just how addicting it can be. If you’ve ever wanted to experience a simple farmer’s life and also have a 3DS on hand, Story of Seasons is worth a try. 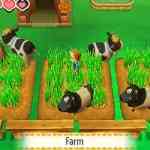 Next Woolfe: The Red Hood Diaries Review – All the Better to Murder You With My Dear
Previous Bloodborne Review – Come to Yharnam They Said, It’ll Be Nice They Said…