Spelunker Party! is the latest release in the Spelunker franchise, releasing on both PC and the Nintendo Switch. The title is an updated re-release of Spelunker World from 2015, which was a free-to-play title. The microtransactions have been removed, and the game has been reworked to four player multiplayer rather than six. While the title is quite similar to a contemporary game, make no mistake about it that the Spelunker series dates back to the Atari 8-bit family.

The game stars Spelunkette, who is awaken by a crashing comet. Due to this incident, strange things have been occurring ever since. The Faerie Chief links the cause to an occurrence deep beneath the Earth. Spelunkette, joined by Spelunker and others, sets out to solve the mystery over the course of a hundred stages.

Spelunker Party! can be played with others or alone, letting players navigate, collect, and survive their way through a plethora of stages. Initially, a lack of a proper tutorial led to many deaths for my Spelunker. After a bit of time, both the controls and the concepts eventually made sense. Players are placed in a variety of levels in various environments where they must reach the end. In doing so, players will require keys in order to advance through various sections. 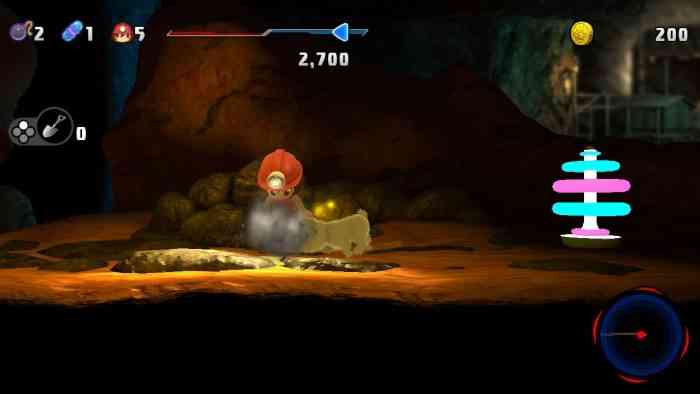 In addition to these keys, collectibles that unlock equipment and costumes are also scattered through the levels. Besides surviving the environment, ghosts, and more, players must be wary of how much energy they have before they succumb to fatigue. Fatigue is reset by activating checkpoints and revisiting them as necessary. The jumps in the game between platforms, swinging vines, and such is a bit clunky, with jump distances being predetermined. This means that whether you want to make a long jump or a shorter jump, the distance will be same despite your desire. Overall though, the gameplay works fine in that you will get used to these mechanics, though it may not seem that great at first. It should also be noted that though the game is quite easy early on, the difficulty surely ramps up for those interested in a greater challenge.

Spelunker Party! hearkens back to the old days of platformers, featuring simple yet challenging gameplay.

Aesthetically, Spelunker Party! is simple and basic. The game will not be a technical or even an artistic showcase, but the simple nature of the graphics has a sort of charm to it. Where the game does not shine in its graphics, it makes up for with a solid heads-up display and an easy to understand map and level cues. Unfortunately, the game’s audio also does not particularly stand out, being more reminiscent of plain background music rather than aligned with the nature of the game.

Spelunker Party! hearkens back to the old days of platformers, featuring simple yet challenging gameplay. Playable individually, Spelunker Party! is likely at its best when played with others. For those looking for a simple, classic platformer, this game is likely to be right up your alley. On the other hand, players should not go into this expecting something more contemporary. Overall, Spelunker Party! is what it sets out to be, and it does it well.