The Spectrum Retreat Review – Opposite Ends of the Spectrum

The Spectrum Retreat is an interesting game. You play as Alex, a man trapped in a simulation of a fancy hotel staffed by faceless androids. Your goal is simply to escape. You do this by going through the hotel in search of codes that grant access to each floor’s series of puzzles, which are centered around a basic function of color-swapping. You start each challenge with white, and exchange that color with red, blue, and green blocks found throughout each level. You can only have one color at a time, which allows you to pass through that color’s respective barriers. These barriers act as floors and walls, requiring you to traverse the challenge room and collect whatever colors are necessary to access the door at the end of each puzzle. Once all of a floor’s puzzles are completed, Alex gains access to the next floor. However, Alex can’t just rush through and complete all of the floors in rapid succession; the nature of the simulation requires that he follow a basic routine involving going to the hotel restaurant to eat breakfast each morning and going to bed each night. If he does not, the simulation will suffer a sort of collapse. This restricts his progress to one floor each day. Along the way, Alex is trying to recollect the events that led him to be trapped in the simulation.

I won’t spoil anything but suffice it to say that the game seems to have a clear political stance on the idea of healthcare as a privatized industry. As Alex regains his memory, though, the simulation begins to fail. This becomes worse each day as the androids begin to malfunction, furniture becomes misplaced and appears to be rendered improperly, and the walls even threaten to fall apart. None of these issues appear in the puzzles, however, which leads me to one of the major issues I have with this game: It’s two games.

When I say The Spectrum Retreat is two games, I’m referring to the difference in aesthetic, gameplay, and theming between the puzzle sections and the hotel sections. The hotel sections feature a woman who communicates with you both to convey the severity of the situation, thereby contributing to the narrative and tone, and to offer instructions to help you escape; it features art-deco-style design, which the Steam page loves to mention; it creates a deeply unsettling environment with maze-like hotel corridors (which can literally extend infinitely, only for you to turn around and find that you’ve gone nowhere); and it is where you find clues to gain access to each floor’s series of puzzles. This sort of ominous mystery gameplay with the goal of escape is so full of potential. Unfortunately, it is unfulfilled potential. The vast majority of the game is spent in the puzzle sections. In the puzzle sections, the woman cannot contact you; the ultra-simple futuristic design makes Portal comparisons unavoidable; the feeling of anxiety and suspense, which often grows significantly after you gain the final piece of information you need to access the puzzle sections, is immediately abandoned; and the puzzles have absolutely nothing to do with the narrative. It’s as if the developers went out of their way to disconnect the puzzles from the hotel as much as possible. If you saw the screenshots on the game’s Steam page out of context, you would think they belonged to two totally different games. Neither section has a bad aesthetic, but the mismatch seriously detracts from the overall game. What’s especially odd is that, despite being totally disconnected from the more story-conducive style of the hotel, the puzzle stages are where Alex regains much of his memory. It’s a bit bizarre to find yourself walking through the middle of a futuristic challenge room and seeing a typical dining room table. It feels out of place. I will also say that the disconnect between the aesthetics makes it difficult to shake the comparisons to Portal. This is unfortunate because The Spectrum Retreat is simply not as good a puzzle game as either of the Portal games. 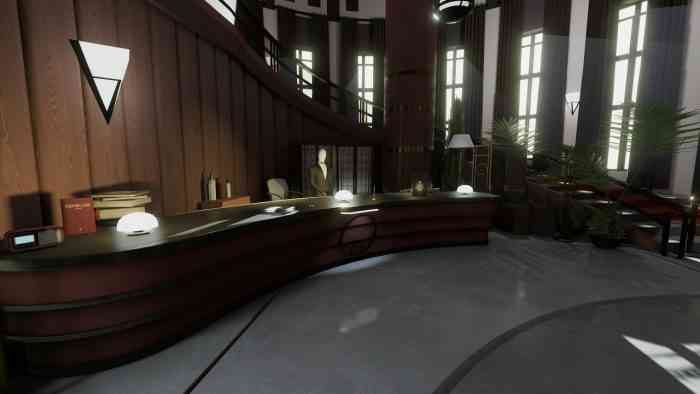 In fact, I would say the game isn’t an especially good puzzle game at all. The color-swapping mechanic is interesting, especially once the teleportation mechanic is introduced, but the puzzles are designed in such a way that it is easy to permanently lose access to a color you needed to complete the puzzle, which means you have to totally restart the puzzle from the beginning. This is by far the most infuriating thing about The Spectrum Retreat. Especially toward the end of the game, puzzles can become quite long and complicated with lots of moving parts. Sorry to reuse the comparison, but the Portal games (especially Portal 2) are the same way. The difference here is that whereas in Portal, you’re allowed to explore your environment to see what tools you have at your disposal, in The Spectrum Retreat, exploring your environment will get you trapped and force a restart. In one particular level, you start with white, as always, and your only option is to teleport to a ledge with a white barrier, which you easily pass through since white is your active color. The only ways out of the room are back through the white barrier you entered from, or through a series of red, white, and green barriers. In the room are two blocks that will continuously offer either green or red. You need to swap to a different color to progress through the rest of the level, so you’re likely to pre-emptively swap your white for either red or green. These particular blocks do not exchange color, though, they only offer color. What this means is that if you try to swap your white with the color of one of these blocks, you permanently lose the white color that you had. The only ways out of the area involve white barriers, so if you make the mistake of swapping out the white for red or green, you have to restart. The explanation is long, but the whole process takes about 10 seconds. In 10 seconds you enter the level, realize that there’s only one place to go, and, if you swap with one of the other colors in that one place, you have to restart. This is one of many examples. This issue is all over the game. You are not allowed to explore without fear of having to restart. Steps must be followed to the T or you will have to restart. When you’ve completed 80% of a puzzle and have to restart because you left a color behind and there’s no way to backtrack, it’s enough to really make you groan.

Even finishing the game isn’t particularly satisfying. We know a little bit about the process of how Alex got placed in the simulation, but we have almost no idea about what the simulation really is or how it works. The end of the game has two endings the player can choose from at the very end. After choosing, there was no explanation of what happened. It just kind of ended. Overall, the entire story felt a bit hollow. I had no reason to connect to anything in the game. Nothing in the story was explored in depth. The hotel as a set-piece was wasted. The whole narrative was shallow. The game shows potential, but it is so incohesive and unimpressive that it flounders as a whole.


The Spectrum Retreat Video Review – Opposite Ends of the Spectrum