I was poised to adore Sparklite. From the first trailer I was drawn in by its captivating pixel art and what looked like would be a fun Zelda-like world to explore, with danger and treasure waiting at every corner. I have a weakness for isometric pixel games like CrossCode, usually, impulse buying them before I even know what’s up. This often has brought me a lot of joy in my gaming career, but every now and then you end up with something you didn’t expect. Something that, no matter how hard you tried, left you frustrated and dismayed.

Sparklite at the best of times left me feeling with “this is okay, I guess” and at worst of times made me want to turn off my Switch and go play something else. And in a recent landscape that covers AAA spectacles like Death Stranding, or this weekend’s Pokemon Sword & Shield, it’s hard for me to justify you not doing that. So let’s get into it. You play as Ada, a silent protagonist out to save the world of Geodia against an evildoer known as the Baron. In the opening minutes, you end up crash landing as your little robot buddy sacrifices itself to save you. It was a heart-touching moment that got me pumped for what would come next., but weirdly, not much else comes.

There is a story in Sparklite but details are often sparse and few between. NPCs you find in the world tend to come out of a quirkiness blender but do little to further build out the world. Which becomes the first disappointment. Later in your journey you’ll encounter truly awe-inspiring bosses known as Titans, but outside of their impressive display they often come down to a few mechanics and some frustrating trial and error. Mechanically, Ada has a wrench she wields like a sword. One button swings the wrench, while another button dashes. You can also unlock items like a bow or a little explosive blimp you can steer into enemies. These unlocks continue in the form of blueprints that you can spend money on to create, or “widgets” that can help solve environmental puzzles. And while some are definitely fun and creative, they don’t do much to shake the all too familiar feeling of Sparklite’s gameplay.

Been There, Done That

I hoped as I found more of these items and upgrades I’d find what makes Sparklite unique. Hyperlight Drifter was punishing but precise in a melancholy world where NPCs spoke to you through images. Bastion worked in a similar hub space with a well-constructed narrative. CrossCode was quick paced and intense with an MMO parody story that kept the laughs coming. In Sparklite you just mash enemies and hope you dodge in time. And you occasionally talk to someone. That’s it. The core loop is you go down to land, you use your one combo to beat up guys, then you die to some nonsense you didn’t anticipate, respawn at your base, spend your currency (known as Sparklite) on something and rinse repeat. A small saving grace is that you don’t lose any earned Sparklite on death, letting you farm up as needed.

So take all of that and add a dash of punishingly difficult boss encounters and you have a recipe for mostly boredom with a heavy splash of frustration. Sure, along the journey you can find passive upgrades in the form of “Patches” that can be equipped via a limited 3×3 grid. These mix and match life bar increases or maps that can help ease the pain of the randomly generated level. And that’s okay too, I guess. You can explore dungeons, encounter varying enemies, and unlock new biomes to explore but it all exists in the same loop, in the same core mechanics, with the same feeling of familiarity that everything is just okay. 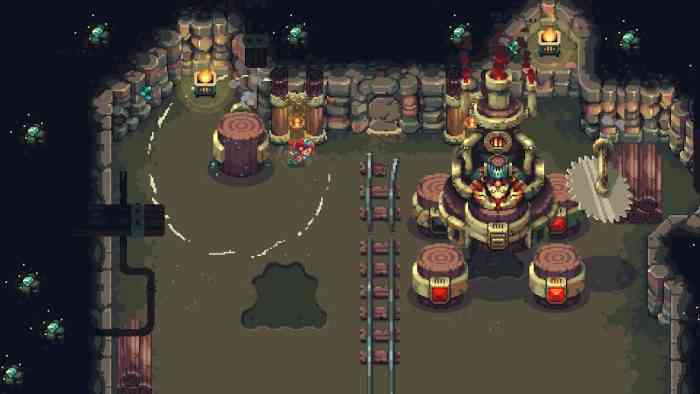 That is your overall rub as you play Sparklite. You can’t help but feel like everything is a bit too familiar, like you’ve done this before in other games that brought a bit of special sauce to the proceedings. As more and more indies arrive in a charming pixelated paint, it’s not enough to just crib from games in the Zelda or rogue-like genres and execute. You got to bring something new, or something unique to the table. Whether that’s story, mechanics, world-building, or all of the above is up to each game. Sure, there are far worse games than Sparklite, but there also far better games with similar structures and rogue-like trappings that are worth your time. Sparklite happens to live in the middle. It’s okay. It’s fine. Its art is beautiful and its music wondrous, but somehow it’s missing its own magic. So if you have nothing going on, and it seems your jam, give it a go. It’s totally fine. Personally, I need something a bit more than okay these days.

***A Switch code was provided for review***


Iron Harvest Preview – A Brutal War Worth Fighting For

Ary and the Secret of Seasons is Feel-Good Indie Magic