I have to admit that I really enjoyed Skylanders:  Spyro’s Adventure last year on the 3DS.  Given my past experience with that game I was really intrigued to see what would be done in regards to the 3DS version of Skylanders Giants.  Being able to put our collection of Skylanders figurines back into the game and venture through a new story was somewhat appealing.  Well, after putting the game through its paces I have to say that most people who buy this game should be happy with their purchase.  Of course the 3DS exclusive Punch Pop Fizz Skylander is pretty neat too.

Skylanders Giants on the 3DS is a separate story of that found in the bigger console versions.  Here you make your way through the games various levels searching for maps, artifacts and NPC’s to help you defeat the evil Captain Frightbeard.  Although the story does take a backseat to the gameplay, I found that most should enjoy what is offered.  Giant Skylanders are the new addition to both the home console and 3DS version of the game, with the new Giants being stronger but slower.  One of the biggest differences people will see is that although there are some brief instances of voice acting, the majority of the story is told through text.  This is a shame as the interaction between the characters in the console versions is part of the charm.  To lose so much voice acting was a bit disappointing.  Having to read very simple text didn’t add much to the stories presentation and actually took a bit away from what could have been.

Once again the portable version of Skylanders is a platform-based game.  In Skylanders Giants for the 3DS your characters have the ability to jump, and developers n-Space and Toys for Bob made sure to utilize this feature.  Unlike the console versions, you will find yourself jumping from platform to platform and avoiding the pitfalls that are put into place.  Sure, it is no Mario, but it is by far a bad platform experience as jumping over gaps, timing jumps off of dropping platforms or avoiding swinging blades had its moments.  Seeing your Skylanders jump is pretty neat too and something that my son was quite amazed at when he first saw Tree Rex leap up in the air.  He even complained a bit that he could not do that on the Wii version of he game he was playing.  Strangely enough though you will come across invisible walls that stop you from going in certain directions that seem open, and although these invisible walls seemed out of place they keep you “directed” through the levels. 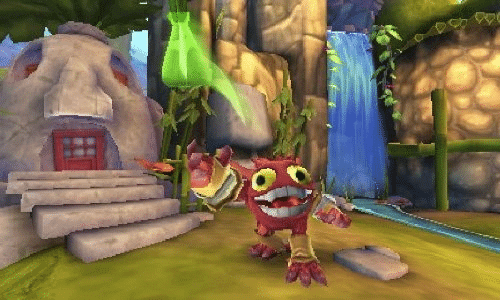 You are also encouraged to explore your surroundings.  There are many hidden areas that can only be accessed by certain Skylanders.  Each level has a three star rating, and in order to earn a full three stars you must complete various objectives in each level and eventually complete the time trial the opens up after your first play through of that level.   Many of the objectives relate to collecting a certain amount of coins or chests, finding a certain number of hidden objects (e.g. rubber ducks), and killing certain enemies; however, accessing some areas to do this require certain elemental types or are only reachable if you are a Giant.

Skylanders Giants on the console is a great co-op multiplayer experience as it allows two people to play together; unfortunately the 3DS version is strictly a single player affair.  I think it would have been nice to see a two-player local wireless co-op feature.  This would have continued the consoles feature of playing together in the same room and could have opened up even more gameplay like the battle arena mode in the home console versions.  It’s not a deal breaker, just something worth noting. 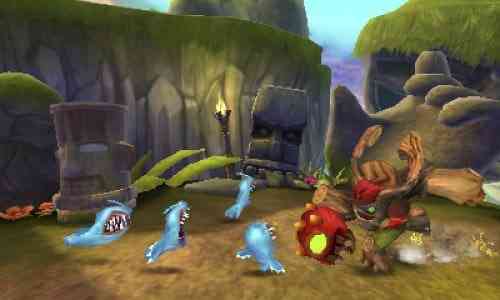 The visuals for Skylanders Giants for the 3DS are pretty good.  Like last year I find the 3D effect pretty cool as it truly does add depth to each level.  Given the platform nature of the game, you spend a lot of time heading from point A to point B, and there are times when you can see the level continuing far in the distance below you and the 3D enhances this view.  Like any platformer you will traverse a wide variety of environments from jungles to Aztec like ruins to an amusement park.  Each level has its own feel to it.  I do have to admit I didn’t really like the “Tunnel of Love” level, but hey, at least it was not a generic lava level.  Characters look like their real life figurine counterpart and are animated quite nicely.  If there are any issues to be found here, I did notice a bit of draw in the distance now and then, and coins would draw in as well.  You will also come across a few periods of slowdown when it gets a tad to busy on screen.  The slowdown does not happen a lot, but when it does you’ll find that it is very visible.

In regards to the game’s audio, it is also fairly solid.  The music is different in each level and I did not find myself turning it down or off at anytime when playing.  As noted earlier in this review, there is a little voice work found, but most of the game is text.  Finally, the game’s sound effects work pretty good.  From the characters warping into the level and announcing their arrival when you swap from one to another to the sounds of weapons used, punches connecting, or coins being collected.  As with the visuals, I did note an issue or two with the audio.  First off, there are a few instances when the music stuttered or sounded like it had static in it.  At first I thought it was my headphones, but even after unplugging and plugging them back in, or listening through speakers, this issue continued.  As well, some sounds can sound a bit compressed.  I don’t remember these issues being prevelant in Spyro’s Adventure.

The best way to describe Skylanders Giants on the 3DS is that it is a companion game to the home console versions and allows you another way for you to level up your characters.  Being that it has it’s own story, own objectives, and that it is a platform game, it is a whole different experience then the version you play on your TV.  Even with some of the technical issues I noted, and a lack of any co-op multiplayer, Skylanders fans with a 3DS can do little wrong by picking this up as there is fun to be had here. 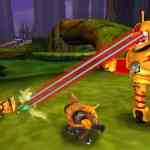 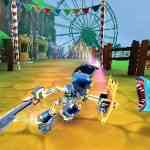 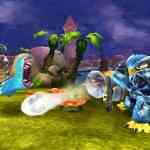 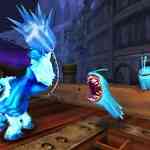 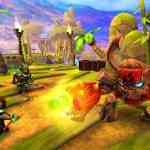 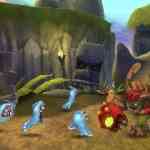 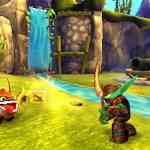 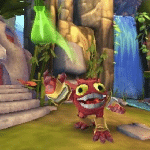 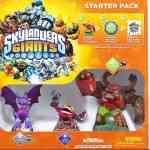