In a Lot of Ways, a Story is Like a Cake

You stick to the formula, and you still get a really good cake, it’s just not going to be as exciting as, say, a molten chocolate lava cake, or a pineapple upside-down cake. Silver Chains is a game that tries to… well, have its cake and eat it too.

You play as Peter, who wakes up from a crash outside a mansion and heads inside for help. You pass out in the doorway and wake up deeper inside the dilapidated house and have to escape, crash completely forgotten. Unfortunately, albeit predictably, there are ghosts in the house that don’t want you to leave. Exploring further you find a ventriloquist dummy claiming to be your father who needs your help to break the curse that’s befallen your family.

You quickly learn not to be afraid of ghosts, particularly Eveline, the tall emancipated lady stalking the halls who only appears during scripted encounters. I died to her once during my entire playthrough, and only because of one of the game’s main problems: to interact with something, it has to be positioned just right on the screen, or else the prompt doesn’t appear. This was a repeated issue throughout the game, leaving me frustrated when I was being chased and had to interact with things in a timely manner. You get a monocle early in the game that shows you secrets in the environment but rather than showing you exactly what you need to do it settles for showing a compass pointing in the general direction, and I thought there was a glitch in my game when this was first introduced because I didn’t have the nigh-on-invisible door handle exactly in the center of the screen. 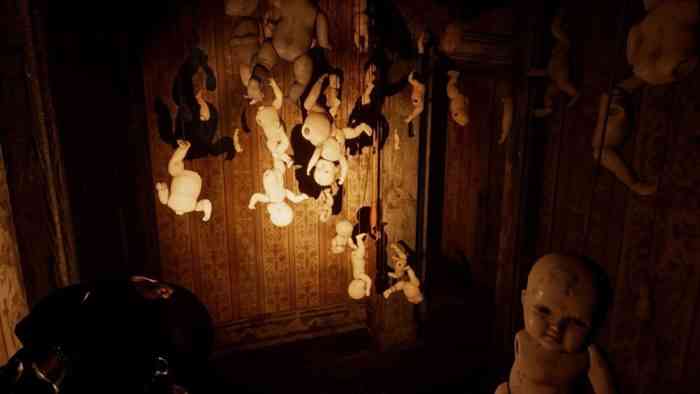 The game doesn’t look particularly impressive – not nearly as impressive as the landing page on the PS5 makes it look. The bathtubs look blocky, the textures are low resolution, the assets are reused, and at times doors seem to float separately from their doorways. The creature design is interesting enough, at times, but they’re let down by poor animation. As far as sound goes, it’s competent. Of course, games should aim a little higher than competent. I quickly noticed some audio loops that felt unnatural. The game tries to be subtle but still feels the need to announce Eveline’s presence with a loud scare chord, even when ghostly whispers are warning you of her presence.

The game was made by Russian developer Cracked Heads, and suffers badly from poor localization. Peter describes things poorly, using words out of context or else in a way that no fluent English speaker, like Peter, would use them, such as “Suddenly I got in a weird place” or “How could such a big maze locate in the house?” This even undercuts moments that I enjoyed. 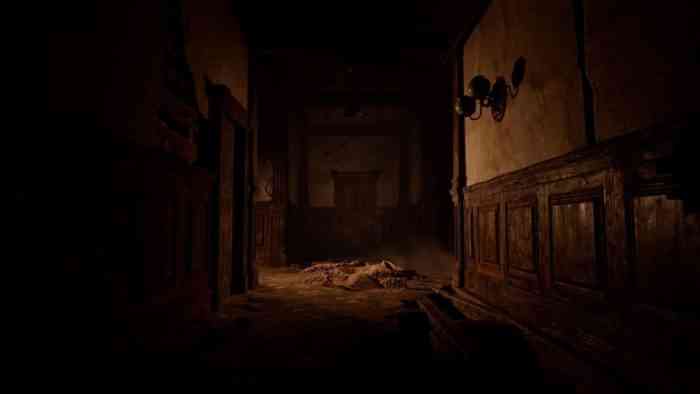 The thing is, I can tell that Cracked Heads were trying to do something interesting – the having the cake. There’s a couple of passable jump scares, and one particular set piece involving a maze made of bookshelves I found interesting, but these moments were too few and far between to excite me for the long periods where nothing happens. The story is told mainly through diary entries scattered around the mansion or Peter’s inner monologue, and in a legitimately nice touch those diary entries are rearranged as Peter finds earlier ones which add context, and I genuinely wanted to get the whole story, as formulaic as it was. It would almost have made a better movie than a video game, and seems to aim for an emotional, twist-worthy climax let down by a poorly-executed chase scene.

The fact that the monsters only appear during scripted encounters lets you soak in the atmosphere (and despite the mediocre sound and graphics, the game is atmospheric) rather than looking over your shoulder waiting for the next encounter. It would have been better served if they’d removed these encounters altogether in exchange for something more akin to What Remains of Edith Finch or Come Home. I got the feeling that they intended to do more, but decided to settle for less. There are a couple of interesting moments scattered around, apart from the aforementioned maze there’s quite a nice moment in the opening minutes involving a record player and a door slamming and an interesting dream sequence later on, but these moments are rare.

It took me around three hours to complete Silver Chains, and if you’re looking for a distraction for an evening you could do worse – but you could also do so, so much better. 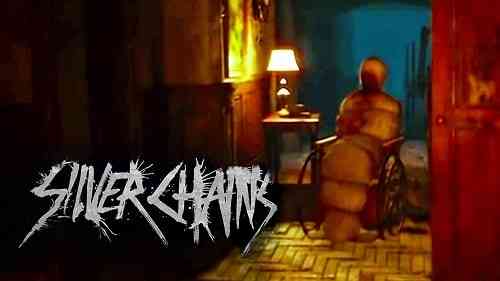