Secret of Mana Review – For Better or For Worse

Video games as an industry are steeped in nostalgia. We’re enamored with what once was, ready and willing to shell out for another taste of that long-gone ambrosia. To that end, major companies and indie developers alike are more than willing to cater to these unceasing whims. Secret of Mana, as part of the coveted Super NES era, holds a hallowed place among some other heavy hitters. Your Marios, your Zeldas, your Metroids. After some time with the remake, I feel like that top spot has been mistakenly assigned.

Right away the same old story beats are back in place. Borf and his two friends (I never use the default names) are exploring in the woods near their town when one of them happens upon the sword of legend, stuck in a random rock at the base of a waterfall. I’m immediately weirded out by the fact that nobody moves their mouth to talk. Every character is locked in a single expression, flailing their arms and bodies in order to convey whatever it is they’re feeling. This feels like a strange decision, one that fails to either modernize the game or capture its original magic.

“I’m immediately weirded out by the fact that nobody moves their mouth to talk.”

This new version of Secret of Mana seems content to wallow in the limitations of the original. A slap to the face is still left to the player’s imagination. Also, characters will frantically walk back and forth as an expression of distress, instead of using facial expressions and body language. This was a limitation of using sprites that no longer exists. 3D models have made incredible strides since the Super NES days. You no longer need to resort to comical silent movie movement techniques in order to convey emotion. When combined with every character’s frozen mouth, this all adds up to a stilted and somewhat lifeless rendition of a beloved classic.

The music has also gotten a modern overhaul. Some tracks manage to match the original score, some of them end up being much worse, but none of them feel like an improvement. The ‘town’ music feels especially dissonant like they’re so jazzed they have more instruments to work with that they’re using all of them at once. Either that, or this is the culmination of their original vision, all those years ago. Like the graphics, the changes to the music are a lateral move, at best. The changes made don’t feel like a meaningful or significant departure from the 1993 version of the game. 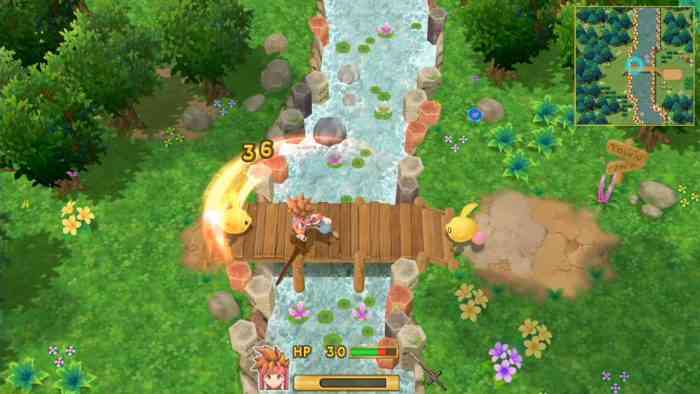 In fact, it feels like the developers simply took the old Super NES game and gave it a graphical and musical overhaul, being careful to preserve the original gameplay experience as much as possible. To those developers I merely ask, why? Why on Earth would you keep the gameplay totally intact when it’s so terribly flawed? I understand that people have deep attachments to this game, that it represents some incredible moment in their childhoods. Yet, the experience doesn’t age like you hoped it would. The preserved game is clumsy, slow and antiquated.

Take the combat, for example. In order to hit opponents with any real force, you have to wait until your meter is charged up. This locks you into this loop of waiting and striking. Said loop grows even more jagged when your other two party members join the fray. Once any of you land a hit, your opponent falls, creating another few frames where they aren’t taking damage. Sometimes the game lags, waiting till the enemy gets up before that damage is registered. Other times you’re just lashing out at the empty air. Anytime you encounter a new spell effect, the game lags considerably. Every single time. It feels less like a bug than the way the engine was designed, almost as if it’s mimicking the Super NES style of hardware processing. Again, there’s no need whatsoever to do this. Then there’s the charging system for attacks. Yes, you can hit for a lot more damage, but now there’s an even longer wait time between attacks. Eventually, you’re running around in tight circles, trying to dodge enemy attacks (which is impossible) until your attack meter fills up.

“Why on Earth would you keep the gameplay totally intact when it’s so terribly flawed?”

Another problematic holdover from the original game is the inventory. There’s almost no way to determine which character’s weapon ring you’re looking at. It took me hours to mostly figure out how to select specific weapons and skills in the heat of battle. This same problem extends to the magic system. The only way to tell whose magic ring you’re looking at is to check the actual spells listed one layer down, or to compare the MP totals. I did a lot of fumbling around before I figured out where to reliably find this basic information. 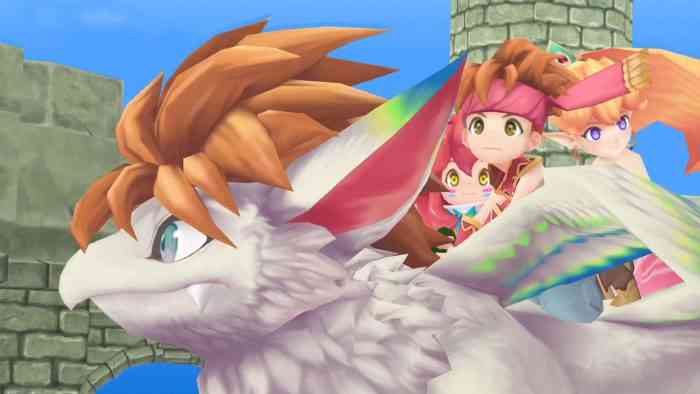 A lot of these sins were easily forgiven when I played the original game, all those years ago. I was young, games were young, hardly anyone knew any better. Now? I’m torn between a mix of nostalgia and revulsion. I’m transported to the past, but I sort of hate it there. In a moment of cruel mockery, the title screen is a perfect reproduction of the original box art. You’re allowed this single glimmer of wonder and hope before it’s dashed against the rocky polygons of reality. If you’ve never played the original version of Secret of Mana, you might enjoy this game. Some of the design decisions will come off as a little strange, but there’s some decent fun buried in there. If you loved the Super NES original, however, this updated version will fill you with confusion, anger and disappointment. 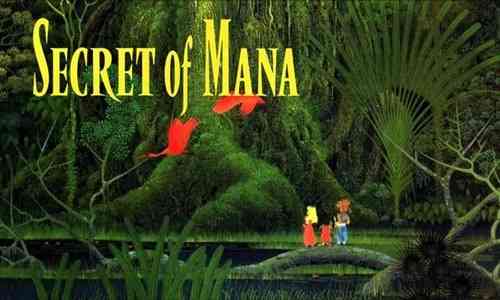