Saying a game puts style over substance isn’t a compliment. It implies that the surface matters more than what’s underneath. In the case of RPG Time: The Legend of Wright, it’s hard to ignore the game’s style, but luckily, it backs up the visual concept with solid gameplay.

Some kids are into skateboarding. Others spend every waking moment dreaming of being the next Tom Brady. Kenta wants to be a game developer, so he spends his free time (and probably most of his school time) cobbling together the world’s greatest RPG, crafted from cardboard and found objects. Center stage, a notebook full of flipbook-style animated adventures tells the tale.

The adventure Kenta imagines is called The Legend of Wright, and it’s decidedly direct: an evil demon kidnaps a princess. Wright is duty bound to save her. He travels over mountains and into deep dungeons, puzzle-solving and fighting monsters. It’s a simplistic story but it fits the concept.

RPG Time: The Legend of Wright is impressively clever. It imagines a game world on a desktop. The action is in the notebook. Around it, cardboard cutouts and found objects make up the interface. A tape measure is Wright’s health bar, for example. The D-pad looks like it came from a cardboard box, and music comes from an old-fashioned MP3 player. A pencil and eraser are always at hand, because Kenta can make changes to the world on the fly. Now and then, shoes and basketballs from the real world pop into the scene. 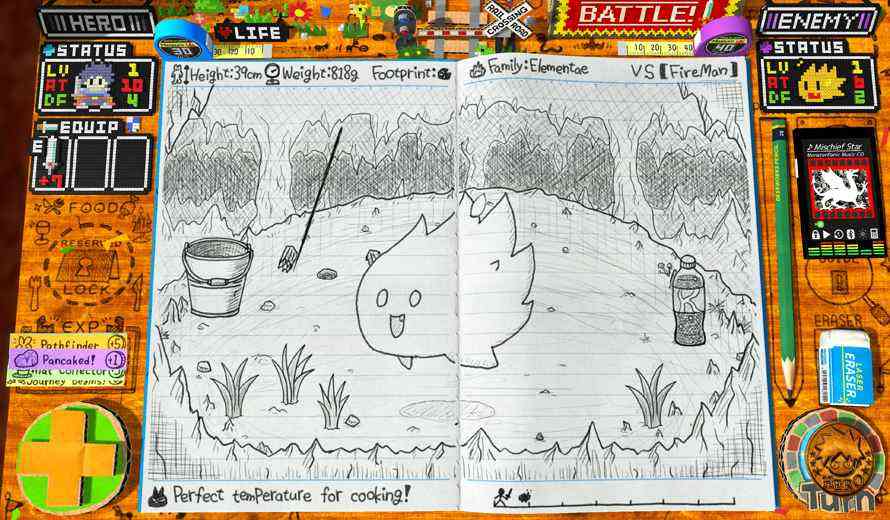 Kenta must be very familiar with the history of videogames, because his RPG is an homage to many genres. There’s quite a bit of straight-up dungeon crawling, of course. Other times, Wright will be solving puzzles or navigating through Pac-man type mazes. There are twin-stick shooter levels and boss battles.

One of the pleasures of RPG Time: The Legend of Wright is surprise. It’s constantly changing things up and around, and while the story might be predictable, the presentation is not.

On the Other Hand

As inventive and unique as RPG Time: The Legend of Wright can be, it isn’t always as fun to play as maybe it could and should be. In part, this comes from the visual style that emphasizes creativity over clarity. Yes, the cluttered desktop is a wonder of found objects and hand-drawn elements, but it’s also hard to navigate and the visual clutter is fatiguing over time.

Some quality of life elements — like the ability to pause or adjust the speed of the narrative — are either missing or have to be unlocked during the game. Instructions to the player are quite often not very clear, leading to some trial and error unrelated to puzzle solving or Wright’s journey. Although death is not terribly punishing in terms of the game, it still results in several animations and clicks before the player can return to the action.

Overall, the experience of playing RPG Time: The Legend of Wright sometimes isn’t as satisfying as simply appreciating the craftsmanship and care that went into the concept. 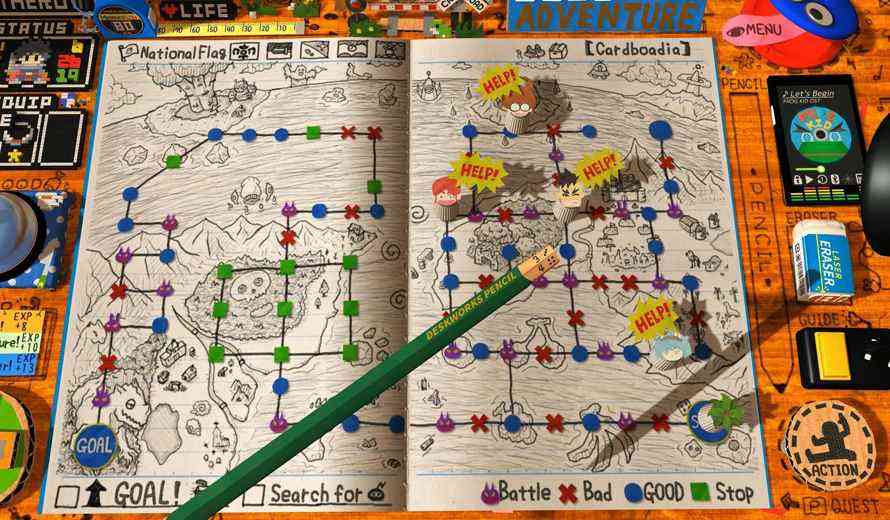 Back to Style vs Substance

RPG Time: The Legend of Wright is unassailably clever. There is nothing remotely like it, at least visually. Many elements work really well, from the hand-crafted animations to the idea of the game springing from the imagination of a precocious, game-loving kid. I wish the story had been a bit more layered, and I wish actually playing the game matched the fun and panache of its presentation. Still, RPG Time: The Legend of Wright deserves praise for the audacity of its ideas and their generally successful implementation. 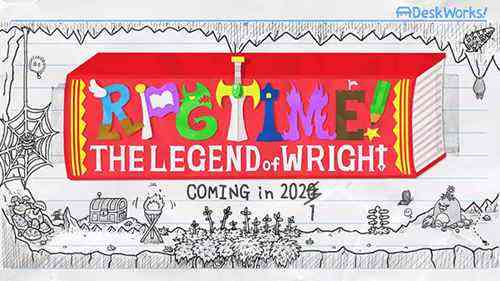 Call of Duty: Modern Warfare 2 Has Made It Easier to Spot Targets
Next No Place Like Home Review – Peace, Garbage, and Chickens
Previous Monster Energy Supercross: The Official Videogame 5 Review – Diminished By Dirt