Ring of Pain Review – It’s All in the Cards

At the surface, a card game that has some elements from roguelike games is nothing to be too excited about. The genre is crowded, and the top spots have been rightly earned by tiny titans such as Slay the Spire and, in my heavily biased opinion, Klei’s upcoming Griftlands.

Ring of Pain doesn’t back down though, and earns its spot deservedly to be talked about with some of the greats. Because at its best, it’s a fresh distillation of what makes these games so fun. Choices. Some tiny confusions hold it back from true greatness, but it’s still a wonderful way to spend many nights.

When you sit down you’ll think this game will simply assume the format of having a hand, playing that hand, progressing and upgrading cards. But Ring of Pain doesn’t care about you having a hand or even a deck of cards for that matter. You are you, and your success depends on what you do with the cards put right in front of your face. At first, my deck-building sensibilities were indignant, but ultimately their design decision pays off in delightful ways. 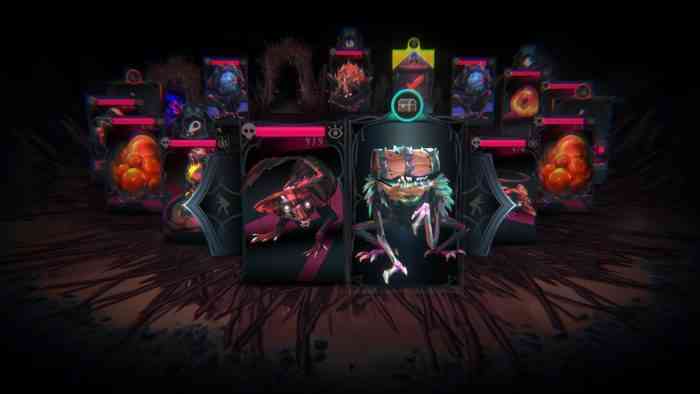 You can get persistent equipment and buffs but ultimately the cards are each a decision point for you to consider, and the choice is not always easy.

Ring of Pain takes place in (you guessed it) a circular ring. Cards are randomized across this circle and you are able to view two at a time. You have no cards of your own, so your choices then depend on what you do with each card. Enemies are cards that will attack you. You can try to attack first (based on your speed stat), sneak by the enemy (at a chance of taking a hit) or if the card next to the enemy is something else entirely, you can sneak that way without being noticed.

Each circle has at least one or two exit cards that drive you deeper into the dungeon, presenting you with a hard set of cards or great boons to choose from. The entire thing equivocates to feeling like you’re on a fast dungeon-crawler treadmill, with you running, dodging, fighting and chugging potions as fast as you can. 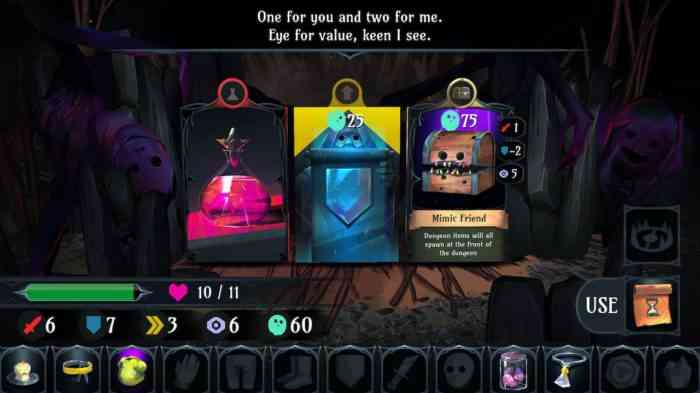 Each card is telegraphed upon hover, so you know exactly what it will do before you click on it. If it’s going to attack, you’ll see the damage translated directly to your health bar. If it’s a buff, that too will be shown. Items will show the slot they’ll be equipped in — it’s all straightforward. You’ll quickly get in a flow of when to sneak, when to attack, when to grab items, when to use items, and when to just accept that you’re about to die.

Death is All Around Us

And you’ll die often. Like I said, Ring of Pain pulls no punches. My favorite fail was landing in a side room with the scary owl thing you see on the games cover. Not realizing it as I was so pumped to move fast, I clicked on the Owl with an attack. I didn’t hurt the owl in the slightest but it one-shot me outright. Dead.

I stared for a bit deciphering my death. The game’s UI while it will tell you what happens for each move, it can take a moment to parse it. There are a few icons that you need to memorize, buffs that take some investigation, and items that you’ll need to use a few times to really grasp their benefits. 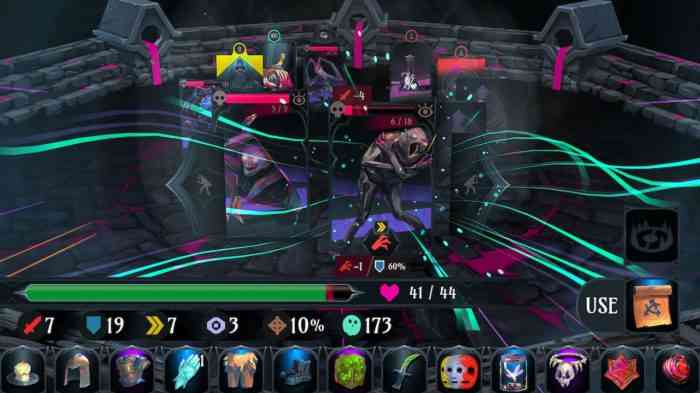 Because Ring of Pain knows death is the likely outcome, it wastes no time letting you start another run, cleverly showing off all the new cards you discovered, which I assume means they’ll show up more continuously on later runs.

Other confusing bits will also become learned through trial and error. For instance, I wish the game told you that exploding enemies will chase you, but they will explode if you’re able to run around them a few times, killing their allies. It’s only through unexpected actions that I was able to put that together.

All in all, Ring of Pain is a different enough take on the card game genre that it’s definitely going to be a good time. While not perfect, it has enough lurking in its depths to keep you thinking “Okay, well just one more run!”

And when in doubt, chug a potion and sneak.

Sea of Stars Will Officially Launch Sometime In Summer Next Year
Next Projection: First Light Review – Well Worth The Aggravating Bugs
Previous I Am Dead Review – Incredibly Endearing Adventure