Reigns: Her Majesty Review – The Queen Takes The Reins

Reigns: Her Majesty is the follow-up title to the original Reigns, both of which feature the “swipe’em up” gameplay style. Releasing yet again on PC, iOS, and Android, Reigns: Her Majesty puts players in the role of the Queen rather than the King this time around. Set in a new period, the title expects to impress players with new storylines, decisions, and overall improvements. Having spent many hours on the original title as well as experiencing an earlier build of Reigns: Her Majesty, I came into the game with high expectations.

As mentioned, players take on the role of the Queen in this new title, with the game set in the Renaissance period. While the original game featured an overall storyline with the Devil, Reigns: Her Majesty’s main antagonist is the All-Mother. Compared to the original, the follow-up game’s narrative is much stronger, interesting, and complex to solve. Players can choose not to focus on the over-arching storyline but without it, the game does become somewhat repetitive. Compared to the original game, the various NPC’s that you meet are not as memorable, but likely because the first game set the bar high.

For the uninitiated, the gameplay revolves around swiping left or right to make decisions regarding the kingdom you rule. The decisions you make affect your kingdom in four different ways, and it is your duty to keep a balance between them. Letting them get too high or low can result in your demise, exile, or any number of consequences… the point is, keep it balanced. A new addition to Reigns: Her Majesty, is the use of items, which now allows players to interact with characters in means other than just by swiping left or right.

“Reigns: Her Majesty features more interesting character designs and artwork than the first”

Despite this addition, Reigns: Her Majesty feels very similar in gameplay to the first title for better or worse. Players can beat the “story” portion of the game without uncovering all the characters and cards, though I feel as though doing so is the best part of the game. There comes a point in the game where players may feel “stuck”, waiting for certain cards to come up in order to activate new events or progress the story. In doing so, the game feels tedious, but the excitement of meeting new characters and completing objectives soon wipes the feeling away. It is hard not to compare the title to its predecessor, but the newer game certainly improves on the characters and events. 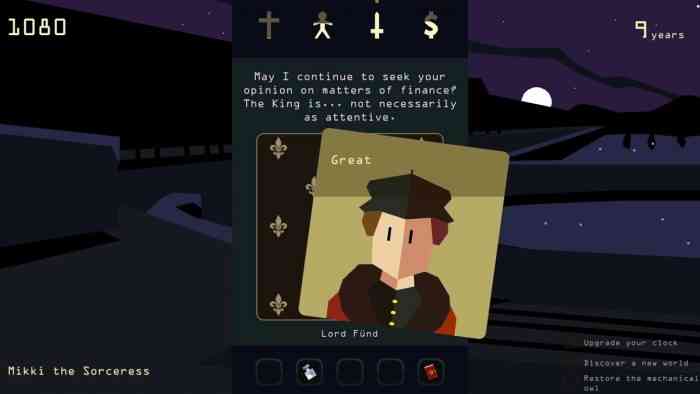 The game features a minimalistic design for its characters and environments. Overall, this works very well, and characters are designed with care to detail. As mentioned, the memorable characters in the first game may take away from the charm of these characters for those who played it. I found, however, that Reigns: Her Majesty features more interesting character designs and artwork than the first. The backgrounds are also very well done and suit the mood and time period very well. The audio of the game was not outstanding either, with seemingly generic background music and a “Sims-like” mumbling voice acting.

Looking at Reigns: Her Majesty with the previous experience of Reigns highlights the positives and negatives of the game. For those of you who enjoyed the first game, you can expect more of the same with some improvements. And for those of you that did not, the improvements may change your mind about this game. Though the game still can feel repetitive, it is much easier to get involved with the main story than in the original game. New characters and storylines keep the game refreshing, but it is essentially more of the same. Perhaps the main reason to give Reigns: Her Majesty a fair shot is the increased social commentary aspects of the title, which I found intriguing and humorous at times.