If you’ve ever wanted to lead a new world order in a neon utopia, Re-Legion wants to be the game for you. It really wants to!

If you’ve ever wanted to start your own cult and forcibly take over a futuristic society, Re-Legion wants to be the game for you. At release, it appears to be the steps into the RTS realm with a creative idea developed by Ice Code Games and published by 1C Entertainment. Thematically, the cyberpunk realm seems clever and fans of the genre who like a Blade Runner aesthetic with a Matrix-esque religious twist may have some high hopes for the game, but there are some major holes that really need to be resolved.

In the beginning, there is only one. Re-Legion starts with you, alone, as the Prophet Elion and you begin by preaching your anti-corporation message to the street rats around you. Gradually you recruit a few rebels to the cause and they follow you and offer you resources and skills as you build your army of neon sheep. Those sheep can act as you see fit, based on decisions made throughout gameplay. You can decide how violent or peaceful they are, what your philosophy is, and take over how you see fit as the all-seeing prophet of the new order. 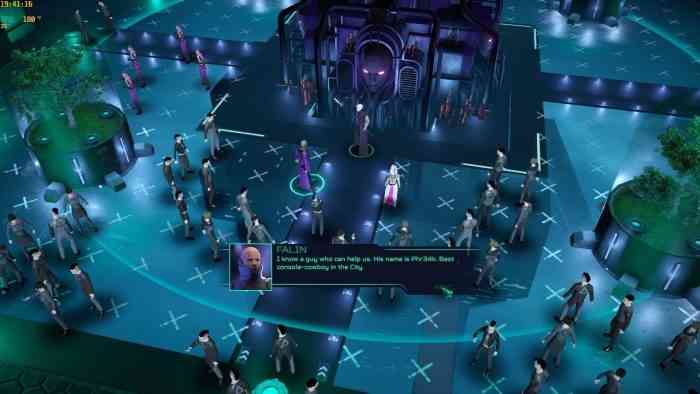 Re-Legion controls like any other RTS, but there was something about it that was difficult to manage. I found it hard to keep the troops I needed to be selected in order to keep them moving through the city. The keybindings move all over the keyboard, which I found to be a bit daunting. I found myself relying more on mouse control than key control, which may have been the goal, but it isn’t my preference. In games like StarCraft, it’s easy to get muscle memory for your armies because you end up with a common combo of keys, but I think due to the amount you have to manage, it’s hard to be on top of everything. Plus the mini-map is not very responsive, which makes it hard to move around and control a large amount of space. My prophet ended up dead more times than I liked due to the over-whelming nature of the controls and the confusion of the mini-map. It is nice that I can resurrect him, but only to find myself across the map from the army I need immediate control over.

1v1 Multi-player plans exist for Re-Legion, but it is not currently implemented. I think this is on hold until the fundamental issues with gameplay are worked out, which is wise on the developer’s part, but there really needs to be some attention paid to simplifying controls before that can be a thing. It’s easy to work against and conquer AI, but reaction time needs to be a lot stronger when playing versus another human, which means the difficulty of controls will really need to be worked out.

As a Cyberpunk nerd, it’s easy to get sucked in by the graphics of the game. Re-Legion has clearly been designed with an affection for neon darkness. The characters all look pretty cool, and the themes are spot-on. The entire time, I felt like I was playing in the streets of Los Angeles or Tokyo in the Blade Runner franchise. They were pleasing and satisfying, and as such, almost detracted from the major flaws of the game.

Where they really fail, though, is in the voice acting. A religious cult leader really should be charismatic, charming, and interesting. A cult leader should be the sort of person you’re kind of afraid to fall in love with, but you do anyway. Elion of Re-Legion really misses the mark on charisma. Some of it is the writing, a lot of statements fall flat, but the delivery of the script by the voice actor. The followers involved, his various officers and the cliche hacker with the cliche name “Phr34k”, all seemed more eager than they should be to follow this box of rocks to the new order. Line delivery overall seemed unrehearsed and dull throughout, which is unfortunate for a game with stunning visuals. I honestly think that if this had been nailed and the story would have been properly delivered by a solid voice-acting cast, that the challenges of gameplay could be more forgivable.

With good reason, Re-Legion is getting missed reviews in the Steam Marketplace. RTS fans are disappointed because the concept seemed so new! An RTS that focuses on conversion rather than building factories or buildings to convert armies. It’s a really cool idea, but the implementation was not there. It’s upsetting, really. Everyone who picks it up really wants to like it because the vision of the developers is very clear. They clearly have a love and understanding of what they are going for, but they may not have had the right team in place to make it happen for them.