The game features three primary gameplay modes: Exhibition, Franchise, and Home Run Derby. The exhibition mode allows you to play a regular game between two teams, franchise mode allows you to play as a team through 10 seasons, and the home run derby mode allows players to participate in a home run derby. These modes are relatively standard for a baseball game, but R.B.I. Baseball 21 doesn’t put much more into them aside from what you would expect.

For disclaimer’s sake, I reviewed this game specifically in handheld mode given the options available on other consoles. As for this game, aside from the game modes being relatively shallow, this can be offset by solid gameplay. Unfortunately, that is not the case. R.B.I. Baseball 21 at times feels like a mobile game, and while it appears to take some cues from other games, it ultimately falls short. The game’s animations really mar the overall experience of the game. Whether it is a player scooping up a grounder two feet away or missing a flyball due to poor visual feedback, the game has a lot working against it.

As for the two primary aspects of a baseball game, hitting and pitching, the game does a decent job with the pitching. I utilized the standard options for control schemes and found that the pitching setup was easy to use. In particular I enjoyed the balance between pitch control, speed, confidence, and general fatigue. While other games have enjoyable pitching mechanics, R.B.I. Baseball 21 does a good job in distinguishing itself.

As for the hitting experience, I found it difficult to determine what makes a swing “good”. Aside from the pitches which I feel come in with a bit of weird timing (everything feels so alike), a lack of good swing feedback hinders the experience. Most hits I get feel like a result of luck rather than skill. While I am able to find success in hitting in other games, it was hard to get a consistent feel in R.B.I. Baseball 21. Perhaps an extended amount of time with the game could alleviate this issue for players. As for the baserunning, I was right at home given the relative similarity it had with other games. 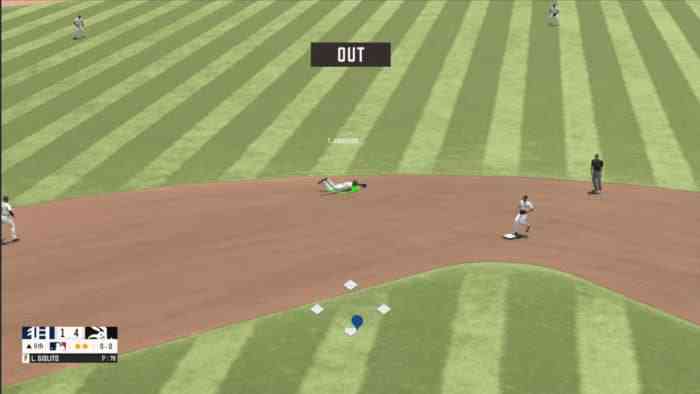 As touched on before, the game’s animations hurt the game, but the graphics don’t help either. The game looks to be tied to mobile versions, and the player models suffer for it. Not only do the players not look great, but even the small details are noticeable. For example, numerous players appear to have massive forearms in addition to consistent clipping issues between arms and fabric, etc. I also wanted to point out that after batting a ball in the Home Run Derby mode, there are literally only two camera angles to watch the ball fly, depending on which side of the field you hit it on. There are a few saving graces such as relatively realistic batting stances. Visually, the game does not look great in general, but this is mitigated a bit when playing in handheld mode on the Nintendo Switch.

As for the game’s audio, R.B.I. Baseball 21 has all-new play-by-play commentary, a first for this series apparently, which is a step in the right direction. Also, the game’s soundtrack has over 20 licensed tracks with big names included such as Travis Scott, Justin Bieber, The Chainsmokers, and more. In games, having music in between innings is a nice touch. Overall, the audio in the game hitting about league average.

On the Nintendo Switch, R.B.I. Baseball 21 strikes out, but swinging at least. There were some moves in the right direction for the franchise, rosters appear to update frequently, and the pitching was still pretty fun. However, a lack of polish, depth, and much more that competitors are providing leave R.B.I. Baseball 21 quite a ways behind. Despite the game having its issues, it could serve as a “pass the time” experience on the couch when the TV is being utilized.