In my younger days I loved the Mad Max movie franchise. I loved the rough and raw feel of the post-apocalyptic action films.  Not to mention I always got a kick out of those crazy Road Warrior vehicles. So when Ravaged for the PC dropped into my lap, the mere concept of the game brought a smile to my face.

The game is broken down into two factions: The Scavengers and The Resistance. Each side boasts five different classes with different weapon loadouts. The classes for the Scavengers are the Bandit, Warrior, Bodyguard, Assassin, and Grunt. The Resistance classes are the Recon, Soldier, Weapon Specialist, Sniper, and Support. Each class plays differently as they all get some sort of main weapon, a secondary weapon, a grenade-type explosive, and a melee weapon to round things out. If you run out of ammo there are various refill stations around the maps to top your character up. 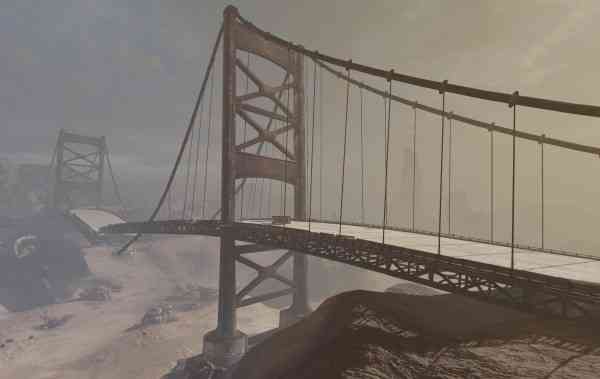 When you first start the game you are given a set of dedicated servers to play on. Currently there are two modes of play. The first one is called “Resource Control” where the two factions are pitted against each other in a capture-the-point type play. You also have a goal to capture the other faction’s resources (gas cans) and bring them back to your base to score a point. When you secure a capture-point (bases of various sizes), you have the option to respawn from that point when you die. The matches have a set time limit, so you need to be quick to score for your team. You only gain points for your team by capturing resources.

The second mode is called “Thrust”, which is similar in that you try to gain control of certain points on the map. However, instead of collecting resources, you try to control all the points while leaving the other team with no spawn points left. Once the opposing team is dead the game is won.

Once you get into a server (which can support up to 32 player matches) you start out in first person mode in your base camp. From here you can either set out on foot to capture points shown on your mini or main map, or hop into one of the many vehicles located around the base. I highly recommend grabbing a vehicle to get around, because running/sprinting will leave you open to enemy fire. Once you hop into something of your choosing you’re now in a third person view which works nicely. The game plays well with a mouse and keyboard, but you can also use a game controller if you choose to do so. 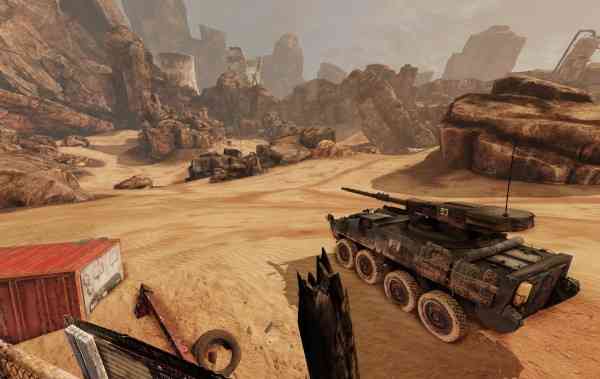 The vehicles are the gems of the game because of all the different types. You will find everything from ATVs, dune buggies, cars, jeeps, military trucks, and heavy armored tanks just to name a few. Depending on the size of the vehicle you can have one or more passengers who (if the vehicle has them) can operate the guns or missiles found on it. The vehicles’ handling can be rather touchy and I had to dial down the steering sensitivity. Once I did that and learned how each vehicle handled I was driving like a pro. Despite that, I did find myself sometimes getting my vehicle stuck in the environment. There is a button command to flip the vehicle if it gets knocked over, but it didn’t always work and then found myself running for my life.

Both you and the vehicle have small health bars on the screen, and you’ll need to keep an eye on them closely because you don’t want your vehicle blowing up with you inside. Your health regenerates over time if you get hurt, but your vehicle doesn’t auto-repair itself. If you do die, respawn times are not that long so you’re not out of action for very long. The respawn times for the vehicles are a bit longer but not so much so that you get bored. You do have a special vehicle that you may want to try (a helicopter) but be warned there is a steep learning curve when it comes to learning how to fly the sucker. It took me several tries to get to the point where I wasn’t crashing soon after getting twenty feet off the ground! They do come equipped with machine guns and if mastered, helicopters can be extremely dangerous to the opponent.

The only real problem I had with the gameplay was that I found it hard to tell sometimes who was friend or foe. The only way to tell is to become familiar with what character designs belonged to what faction or seeing the small red indicator located above the person. If you team-kill you lose points off your personal score at the end of the round, which also affects your overall ranking on the leaderboards. Personal points are handed out for kills, capturing resources, and assists. You also get bonus points for being the point leader during the match.

Right now there are five maps to choose from which range from a few desert-themed maps, a jungle, and a winter environment set amongst certain cities, bridges and industrial areas. I imagine soon they will release updates with new maps and game types as the game matures. I was really surprised I could not start up my own server, but that may come later. 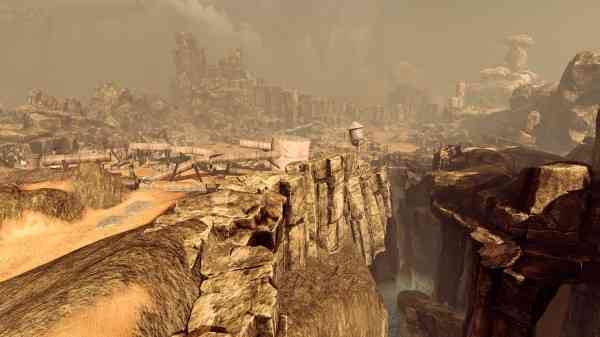 The overall look of Ravaged works perfectly with this style of gameplay. The gritty war-torn look and hacked-together vehicles are quite detailed. Character designs are a little weaker as they just don’t stand out. Perhaps I am spoiled, but I’d like to have the freedom to alter the classes’ appearances to my liking to give them my own personal touch. The maps overall are huge, detailed, and have plenty of room to hold the maximum amount of people without feeling cramped.

If you like explosions and gunfire then you’re in for a treat, because Ravaged has tons of them and they will knock you off your feet. The roar of the engines from the vehicles will have your heart racing as you zoom around the map trying to capture the next point, or get the resources back to your camp before something takes you out. There is a mysterious announcer voice over that comes on now and then to tell you when a capture point is being attacked or your resources are being stolen or dropped. This works well enough without getting too annoying or in your face.

As far as first person vehicular shooter multiplayer games go, Ravaged for the PC is very enjoyable and it was difficult to put down. Granted Ravaged is not the most polished PC shooter available but the price is right, it is entertaining and offers up hours of mindless fun.  So if you love to ‘run and gun’ or in this case ‘drive and gun’ then Ravaged for the PC is for you.