Much like last year’s Ratchet and Clank All 4 One, this year’s game, called Full Frontal Assault, continues Insomniac’s push towards a focus on multiplayer gameplay.  All in all there is not really that much to this game.  That being said, Full Frontal Assault is still fun and priced accordingly.  With a focus on competitive multiplayer it requires you to balance coming up with successful strategies while keeping up with the frantic gunplay.  Juggling these two elements is both challenging and fun.  It feels rewarding when you’re able to successfully pull off a strategy while racking up an impressive kill count.

In Full Frontal Assault’s multiplayer gameplay, which comes in either one-versus-one or two-versus-two flavour, your goal is to push towards and ultimately destroy six generators in your opponent’s base all the while remaining aware that at least one of your own generators must survive any attacks.  Gameplay cycles through three phases: a node-capturing phase, a defence and soldier-purchasing phase, and an assault phase.

While in the first phase, referred to as Recon, you dash across the map looking for and capturing nodes.  Fortunately rocket boosters on the soles of your boots are there to help you.  Nodes located around the battlefield are guarded by weak defenses; by overcoming these forces you can capture the nodes and make them your own.  As you are on the offensive, so to speak, you have to be aware that the same thing is happening to you as your opponent tries to take over any nodes that belong to you.  Capturing nodes provides you with weapons for your hero.  Additionally, each node you control pays out a constant stream of bolts over time.  These bolts are required to have a successful squad purchasing phase. 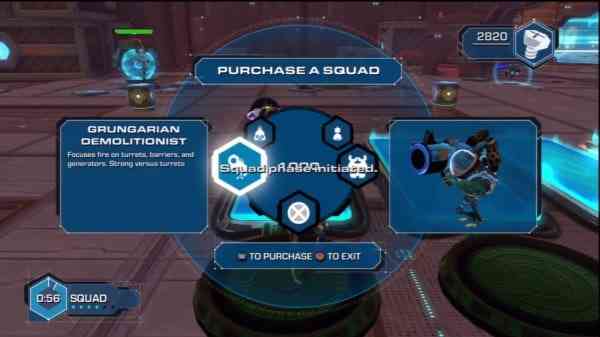 During the second phase, the defence and squad purchasing phase, you can spend the bolts you have acquired on base defences such as barriers, turrets and mines as well as the various squads that are available.  Much of your decision making comes into play in this phase.  I found myself pondering whether I should build up an incredibly solid defense or if I should spend all of my resources to go on the offensive.  Attempting to balance the two is also an option.  During my time with the game I tried multiple strategies and all have their own benefits and weaknesses.  Pouring resources into an early assault is exciting and can hold potential for an overwhelming early victory but it can also cause huge problems if that first assault fails.  Bolts initially come in at a slow pace, but over time the supply rate constantly increases.

One outcome I encountered involved my opponent capturing more nodes than me during the Recon phase.  It was very challenging to keep up given my lower resource income.  That being said, it isn’t impossible to stay in the game when this occurs.  You are not forced to spend your entire defence and squad phase in your base.  Though you cannot capture nodes during this time you can whittle away at the defenses on your opponent’s nodes, making them easy to take over when the next recon phase begins.  This can also tip the scales back in your favor if the odds were previously against you.  As with many combat heavy multiplayer games some battles are one-sided affairs that end quickly with a clear victor.  During a balanced match battles have an exciting flow that has players struggling for dominance.  Full Frontal Assault offers enough tactical options that create unexpected scenarios where the battles never feel boring.

Following the defence and squad purchasing phase is the final phase called the assault phase.  Here any squads you purchased attack your enemy’s base.  Much like the previous phase, you have a choice to make: Do you hunker down and protect your generators or do you launch everything you have at the enemies front lines?  This latter choice is obviously the most exciting one and it tends to hold the most weight during the battles.  Refined shooting mechanics supports the tactical decision-making.  Initially you begin with a straightforward combustor weapon, but as you capture nodes you are rewarded with an arsenal of alternate weapons as well as support items such as a decoy producer.  Intelligent use of your support items can pay off; as they can help you take over nodes and drive away enemy attacks.  All of the weapons feel great and are fun to use; however, I did find that the enemy AI was pretty bad.  Frequently, I found enemies caught on the environment as they were attempting to approach my base too. 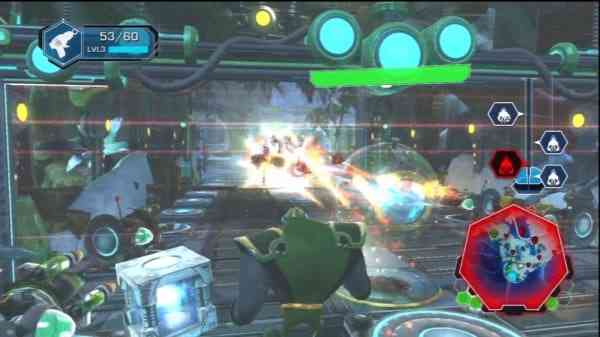 Regarding the online portion of the game, ranked competitive matches keep track of and rate your performance.  The game uses your rating to place you into one of several leagues, much like Starcraft on the PC does.  The matchmaking system does a fairly good job of finding opponents at your skill level.   Alternatively, you can host or join custom matches and play with friends.  A brief single player mode does exist, but its purpose is solely to introduce you to the layout of the game and its play style.  If you are looking for a single player experience like the previous Ratchet and Clank installments you will have to look elsewhere as Full Frontal Assault’s focus is entirely on multiplayer.

The visuals in Full Frontal Assault are great.  Textures are sharp and explosions look impressive. Details in the environment and character models are slick and eye catching.  The visuals hold up well to the series name, yet the audio department is a bit of a letdown.  The uninspired musical score seems like an afterthought and makes for some dull listening.  Fortunately a better effort went into the rest of the sound.  The guns release appropriately powerful noises and the explosions going off in the distance are always exciting to hear.

With a no single player story Ratchet & Clank Full Frontal Assault is pretty much entirely focused on being a fun ‘pick up and play’ multiplayer title.  There is the bonus that if you purchase the game the PS Vita version is included, though it will not be available until January.  Where I am concerned is that there is only one multiplayer mode available and the game does get stale relatively quickly.  There is no denying that Full Frontal Assault can be an entertaining game in the realm of multiplayer, but with no story mode that fans have come to expect, and a lack of further multiplayer options, the experience becomes repetitive and somewhat boring quite quickly.