Raiden V: Director’s Cut Review – Not Much has Changed

When you think of an arcade it’s hard not to picture at least a few of the machines featuring a vertically scrolling shoot ’em up. Some of those titles have come and gone, but Raiden has managed to continue on for 27 years and counting. While I certainly dropped more than a few quarters into the original back in 1990, things have changed since then. I might not be able to find a local arcade anymore, but I definitely know where to find Raiden, right here at home. With the release of Raiden V: Director’s Cut that classic shmup action is right back at my fingertips where it belongs.

So what’s different about the “Director’s Cut”? Not a whole lot, unfortunately. For owners of the original version on Xbox One, there are 2 added missions and the chance to play the story mode in a local co-op. That’s it. The real addition here are the new platforms for which it’s now available. Raiden V: Director’s Cut is on PC and PS4 but not Xbox One. Consider the minor additions a token of appreciation for waiting a year longer to get it on your chosen platform. If you do own the Xbox One version, there really isn’t much reason pick up the Director’s Cut, unless you really like Raiden.

With most of the bad news out of the way let’s get to the game. It’s a classic vertical shmup/bullet hell with a few twists thrown in as well. Players can choose between one of three ship types: the classic all-around type, the high attack but slow movement type and the fast, fragile and weak type. If that last one sounds wholly unappealing to you, then you probably are at most an occasional dabbler in shmups (and that’s OK). Raiden V: Director’s Cut offers a sizable portion of bullet hell, so firepower or even a strong defense don’t mean much if you can’t dodge out of the way.

“Some missions are better suited to certain weapons than others, but it can be hard to try and level up multiple weapons at the same time.”

Shmups aren’t all about dodging either, there still is stuff to shoot after all. Having selected a plane, there is a choice of 3 different variations on Vulcan (bullet), Laser or Plasma weapons. Which one you choose is mostly a preference on play styles and which patterns or spreads you prefer. All start at level 1 and can be powered up to level 10, but be aware, only one weapon is active at a time. Power-ups can boost the level of your current weapon, or change to one of the other types. Some missions are better suited to certain weapons than others, but it can be hard to try and level up multiple weapons at the same time. If you are starting out, staying with the one that works best for you most of the time, might be the way to go.

Those aren’t the only weapons though. There is the shmup staple of bombs, which lay down massive damage to everything on the screen including destroying bullets. The twist (there’s always a twist) comes in the Cheer Attack. This massive attack can be unleashed once the cheer bar is filled up. How that bar is filled up is a rather interesting part of gameplay as well. You can “cheer” for other players in the game for their accomplishments, as well as them cheering for you, to fill up the meter. 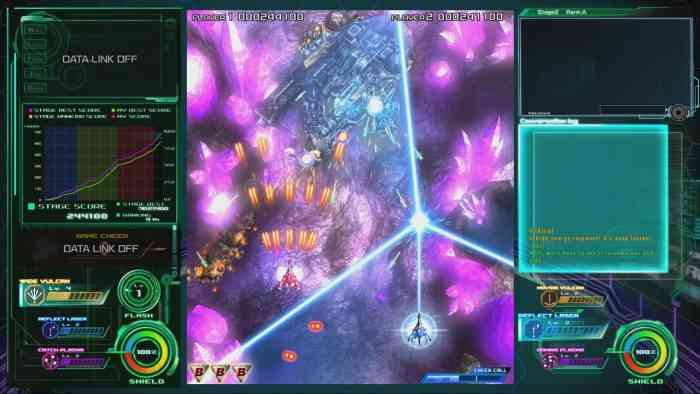 Sounds good right? Well, there are some drawbacks to this system. Namely, what if no one else is playing? The bar does increase very slowly on its own. But, the game seems wildly different when one can unleash those attacks regularly. Playing on normal was a constant barrage of cheers, then I went to check out the Very Hard difficulty and I only noticed at most two other players showing up to cheer at. That changed the dynamic far more than the bump in difficulty and high score seekers may not find it as appealing either. At the very least pooling all the players regardless of difficulty may be advised, as time passes and player count dwindles.

Oh, and there is a fully voice acted story! I guess you can call it a story. Truthfully all I can recall about the tale is, someone talked about coffee at least twice, something about contaminated crystals and one of the mission branches ended with the Earth turning into Mars. That may have been a spoiler there, but I’m not entirely sure. One thing is for sure, there is a whole lot of talking going on throughout. It was very hard to hear most of it through the regular game noises, and while I most likely could have adjusted the volume on those aspects, what parts of the story I did hear didn’t seem worth the minimal effort to do so.

“Raiden V: Director’s Cut has a nice rhythm and flow to it and the difficulty seems neutral enough to be appealing to most gamers.”

Story aside, Raiden V: Director’s Cut is a solid vertical scrolling shmup. There is a fair amount of game to play, multiple stage branches, plus quite a few boss battles over five different ranks. If you are casually playing that should keep you busy for a while longer than a lot of other games in the genre. For the high score hunters, that amount of content might not matter as much, but those nights when no one is “cheering” you on might sour things a bit. Raiden V: Director’s Cut has a nice rhythm and flow to it and the difficulty seems neutral enough to be appealing to most gamers. It may be on the more expensive side, but there is a subtle refinement to the gameplay that makes it worthwhile. 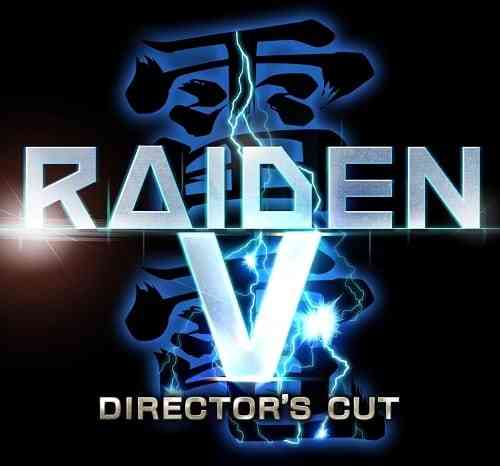