It’s no longer news that just about everyone is now a videogamer, in one way or another. Videogames are the most lucrative form of entertainment, and, I would argue, often the most creative. Sure, the gaming landscape is dominated by blockbusters, sequels, and copycats. Look in the margins, though, and you’ll find hidden gems – audacious games that defy conventions. Obsidian’s Pentiment is singular, that’s for damn sure. But is it fun?

Murder and Mystery in the Middle Ages

As a sometimes visual artist, full time musician, and too-busy writer, I love games that embrace a strong artistic vision. I’ll admit it. Graphics and art matter, at least to me. So we have to begin by talking about Pentiment’s aesthetic design. Taking medieval illuminated manuscripts and art as a starting point. Pentiment’s concept is to bring them to life. You might have seen those stylized drawings that added visual interest to hand-copied manuscripts, back before the printing press brought books to the masses. Or maybe you know the masterpieces of artists like Albrecht Dürer, Hans Holbein or Hieronymous Bosch.

Knowing these famous creators or a bit of art history isn’t necessary to enjoying Pentiment. Having some background, however, will help you understand why the game looks like it does. It will also help you appreciate how perfectly Josh Sawyer and his team bring the style to life. While Pentiment takes some reasonable liberties with design, the characters, animals, and architecture are much as they were depicted by illustration from the 15th and 16th centuries. The developers did their research, that’s for sure. If you’re worried that your medieval history isn’t quite up to the task, the game has an extensive glossary. Problem solved. 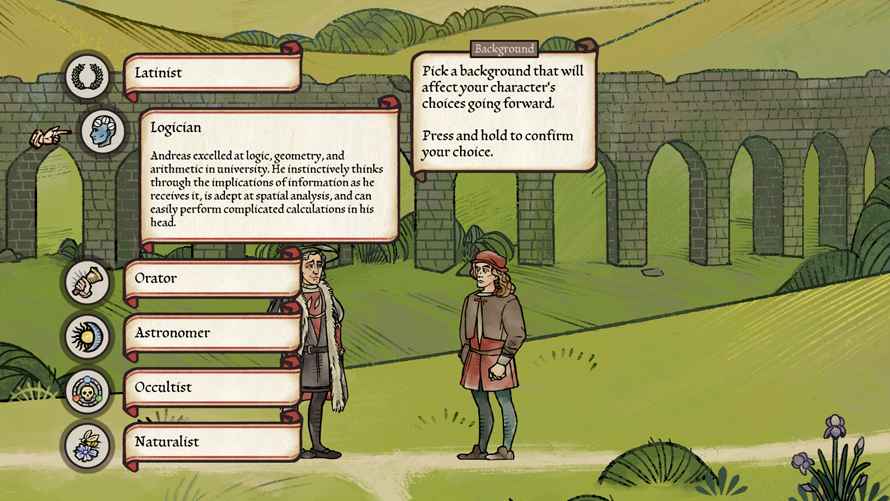 The unique presentation extends to the score by Alkemie, a group that specializes in early music. The music in Pentiment is a mix of both actual, historical compositions and original music that uses the instruments of the time. Because the game is not voiced by actors, the soundtrack and audio design are doubly important, and they’re generally very effective, if understated.

Because Pentiment’s main character is an artist and scribe — we’ll get to the story in a moment — fonts are almost as important as the words themselves. There are simple, handwritten fonts for everyday people and situations. Dialogue with religious figures changes the font to a more elaborate style. Sometimes dialogue appears in a typeset font. Pentiment’s fonts play a critical role in character development and subtly give the player clues about motives and psychological states.

Although impatient players can speed it up, dialogue looks (and sounds) like it was being laboriously inked-in one letter at a time. Fresh ink starts glossy and dries matte. Since there was no medieval auto-correct, mistakes and misspellings happen. Just like in the Middle Ages, keywords and religious names appear in color. Pentiment’s approach to fonts is both off-the-charts nerdy and a key to unlocking some of the game’s mysteries. The ever-present sound of pen on paper might be grating to some, but it can be minimized. 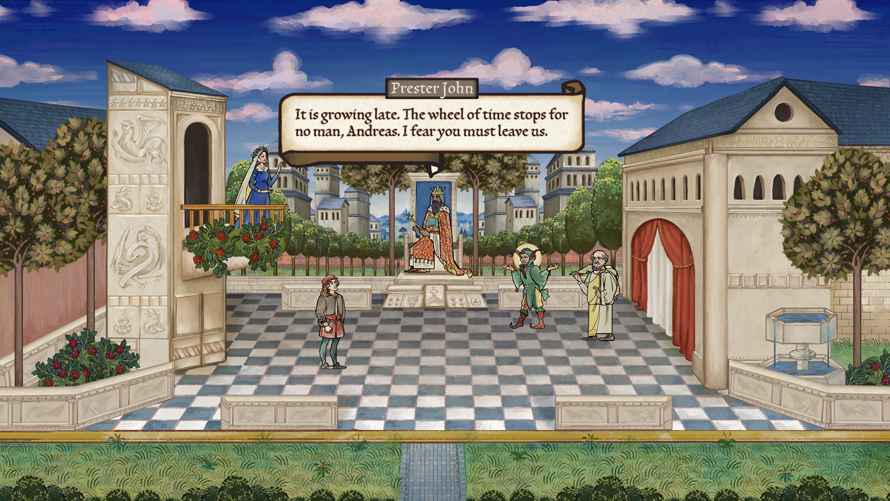 As engaging as the art, design, and fonts are in Pentiment, ultimately they serve the narrative and gameplay. The game’s primary protagonist is an artist named Andreas Maler (Maler is a surname meaning painter in German). Andreas’ day job is working in the scriptorium in Kessau Abbey, where he hand-copies manuscripts. Andreas is part of a dying breed of craftsmen. He finds his work rather dull and would rather work on his own artistic masterpiece. But he needs coin to pay his rent.

Andreas lives in the small Bavarian town of Tassing. It’s populated by a large and chatty cast of local characters, whom we get to know over a span of 25 years. Aside from some simple mini-games, most of Pentiment’s gameplay consists of exploring locations on an expanding map, and engaging in dialogue. Like in classic adventure games and RPGs, dialogue in Pentiment opens up story paths, closes others, and at every moment is shaping the narrative behind the scenes. Sometimes the game alerts you to important choices. Early on, for example, some simple conversational choices establish Andreas’ interests and backstory, both of which resonate through the game.

At it’s heart, Pentiment’s narrative is a murder mystery and we won’t spoil the details or plot. Suffice it to say that solving a murder in the middle ages does did not rely on the forensic, investigative tools at our disposal now. But there is also a way that the murder is a red herring. It’s simply a device for exploring a fascinating slice of history.  Thanks to interesting characters, Pentiment helps to make the past relatable. After all, despite the overwhelming distractions of social media and technology, we’re not so different from our 16th-century ancestors. Love, morality, career choices, personal expression, crime, and punishment haven’t gone away. 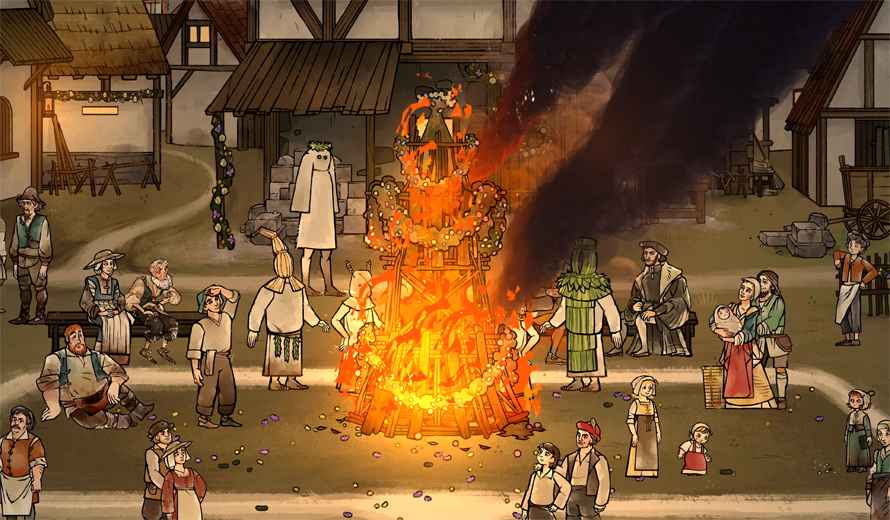 Like all passion projects, fulfilling a vision is more important than catering to the mass marketplace. While it’s undeniable that the 13-member team has crafted something unique and in complete service to its mission, Pentiment still has a few issues. The dialogue can be dully expository, or, at the other extreme, make its points in a heavy-handed way. The central mechanical device — the laborious process of hand-scripting dialogue — can be speeded up but over several hours wears a little thin. After all, people don’t speak one letter at a time, and making the player wait for each word can disrupt the flow of conversation. The lack of voiced dialogue is understandable, given the immense number of lines and less immense budget, but a little would go a long way to making the characters come alive and make the experience less dry.

At least visually, Pentiment is unlike any game in the marketplace, and its execution is never less than impressive. As a reflection on the role of the artist and the fundamental, unchanging nature of the human experience, it can be thoughtful, amusing and moving. The game’s mechanics, some of the writing and pacing definitely take a back seat to the aesthetics. Taken as a whole, playing Pentiment is another great reminder that not every videogame experience needs to overwhelm the senses, challenge reflexes or be the product of market research. Pentiment might not be for everyone, but that’s ok. Not for everyone is sometimes exactly what we need. 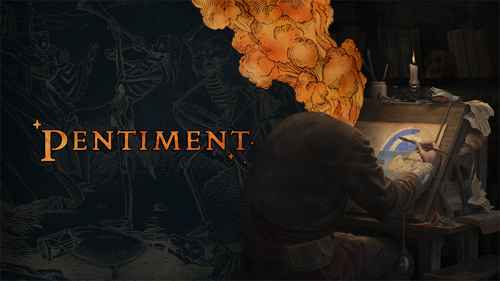