Considering how popular the animated series “One Piece” is here in North America, it’s really not surprising that the property also boasts the title of the highest selling manga in Japan. The epic voyage of the eccentric wannabe pirate Monkey D. Luffy and his loyal crew of misfits has delighted not only myself, but thousands of fans across the world through comics, television shows, movies, and yes, even games.  One Piece: Pirate Warriors, developed by Tecmo Koei and published by Namco Bandai, attempts to recapture the magic of One Piece by uniting it’s well developed storyline with the unique fighting dynamic of the Dynasty Warriors series; and while the game has a great amount of content for lovers of the series, it sadly lacks polish and is poorly executed.

The main mode of the game is called “Main Log”, which takes you episode by episode through the entire saga of Luffy’s long, perilous journey to becoming the next Pirate King.  Although the main quest line manages to summarize how the tale of the Straw Hat Pirates unfolds, it does a somewhat poor imitation and fails to capture the excitement and joy of the manga and cartoons. I did enjoy the accurate portrayal of all the characters and set pieces, and hearing all the original Japanese voices is also a nice touch; but people new to the franchise will probably get lost in the complex web of side plots and twists, and the lack of an English voice option might prove frustrating when following along with the dialog. Also, the visual style is mediocre at best, with really basic level design that often fails to keep you immersed in the experience.  You really have to be a fan of One Piece to appreciate the throwbacks to the story, as the game doesn’t fully convey how creative and entertaining the series really is. 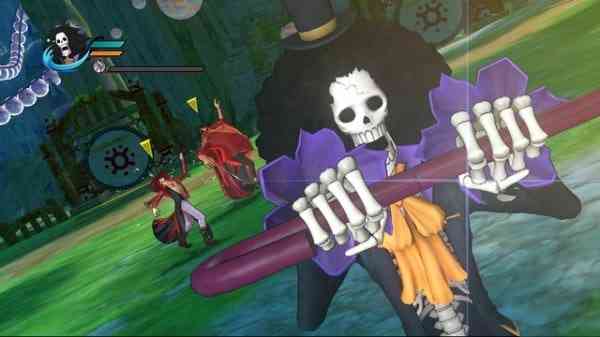 As for the game play, which is probably the game’s strongest element, every level offers slightly different objectives.  In the “Main Log” you play mostly as Luffy and occasionally you’ll take control of other companions as you progress.  You spend most of the time dashing through the levels throwing yourself against giant mobs of trash enemies who pose almost no threat at all.  You use chain combos to link Luffy’s many Gum Gum stretch attacks together, and while some of the attacks are clever and fun to learn, you’d be just as successful randomly mashing buttons. Occasionally, larger enemies known as Leaders will appear on the map and might provide some challenge. Attacking them head on isn’t always easy, forcing you to evade their blows with a quick dash and wait for them to get stunned before attacking.  Luffy can also charge up attacks by holding down the button, whipping his arms and legs with further range to take everyone out at once. He also has special attacks like his Bazooka and 2nd gear, which devastate enemies and require SP to activate.  Most of the attacks you perform are elaborate and flashy, and while entertaining to watch, don’t require much skill to pull off.

As each episode is completed, you’ll unlock new characters which will both fight alongside you in the “Main Log” and can also be playable in “Another Log”, the multiplayer section of the game.  Each character has his or her special attacks and play styles, as well as their own quest lines in “Another Log” to play through, separate from the main story.  Both Luffy and his companions level up as they fight and complete objectives, giving them access to new moves and increasing their life and attack damage as well.  Each episode rates you on performance, displaying a score card with a lettered rating (S being the best and then dropping down to A, B, C and so on).  The faster you beat a level and the less damage you take will ultimately decide what your rating will be, and the higher the rating, the better the score; which means more experience for leveling and better rewards on completion.

As an added bonus, you can earn coins by finding them in chests, and also as a level reward for your performance in game.  One Piece: Pirate Warriors has an elaborate buff system where you slot coins together in a treasure board, each coin having unique attributes and side pocket effects that will enhance your techniques and give bonuses to your life and strength.  Linking the right coins together will also unlock team skills with special conditions to help Luffy and his buddies become more powerful.  Every character has their own treasure boards to equip, and will gain more slots as they level up.  The interesting wrinkle about the team skills aspect is its reliance on your knowledge of the series, since coins represent characters and points of interest, and when linked, mirror events that transpired in the story. 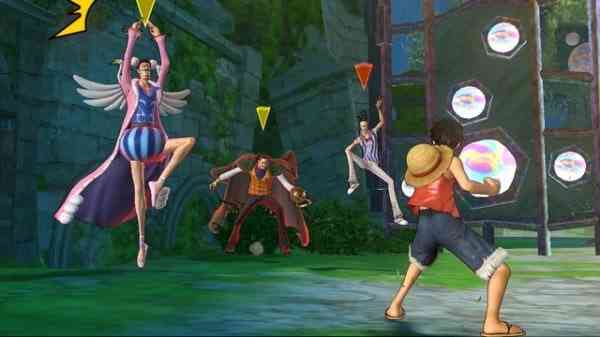 Every episode has a different environment type. Some levels are almost purely platformish, where Luffy will use his long arms and legs to overcome obstacles and traverse the environment through a series of quick time events and simple puzzles, making you preform pointless chores like rotating statues and smashing down walls; all of which is pretty monotonous and hand holdy.  Other levels are combat heavy, where you and your crew work together to capture territories and dominate the stage.  These are generally my favorite types of levels since the entire map is alive with battle and many of your crew members are fighting in other areas while you’re busy with your own fights.  Occasionally your comrades will request assistance from you and will need your help to overcome a hideout or defeat a leader.  Every episode, regardless of type, ends with an epic boss battle made up of multiple phases, bouncing back and forth between regular combat and QTE, and ending with a cinematic conclusion that coincides directly with how the battles happened in the manga and show.

Once you defeat the final boss and conclude the “Main Log”, the “Challenge Log” will open up; a special mode to test your skills by throwing endless amounts of enemies and bosses at you, your goal to survive as long as possible.  There is also an online mode to complete the logs online with other players.  Both logs have leaderboards which list the names of players with the best times and the highest scores.

One Piece: Pirate Warriors is an enthusiastic tribute to a really great animated series that has a lot to offer despite the barriers of entry.  Given the lack of polish and execution, the price might be a stretch for those unfamiliar with the franchise, but for loyal fans of the series or Shōnen manga in general, One Piece: Pirate Warriors is bursting at the seams with rich content, and is probably one of the better anime influenced games to come out in awhile.