Square Enix has made multiple attempts to capitalize on the nostalgia generated by their 16-bit days. Games like I Am Setsuna, Lost Sphear, Brave Exvius and Bravely Default all draw from this sacred era in different ways. Octopath Traveler is no exception. The combat, the music and the art style are all haunting recollections of RPGs from the cartridge glory days. The difference between Octopath and many other nostalgic retro games is execution. This merciless exploitation of your fondest childhood memories is also an exceptional Square Enix RPG.

For me, an excellent RPG is defined by three things: beautiful graphics, addictive combat and a rewarding grind. Octopath has these things in generous portions. I recognize that this isn’t the magic formula by which every gamer measures RPGs, but any title that boasts these qualities will utterly hook me. Perhaps you’re even a bit confused as to how grinding can be any sort of reward. Well, if you can find a way to get enough job points you can ensure that there are two members of any given class in your party at once with high level skills. Then, it’s just a matter of knowing which party combos to use on any given boss or region. Sprinkle in a healthy dose of hidden weapons and super skills and you’ve got yourself a cascading series of goal posts. At the end of this crazy conga line of invested time and perfect combos is a full party of deadly warriors who can do four-digit damage with a wave of their hands.

Maybe that didn’t make a lot of sense. If not, think of it this way: Octopath is a game that lays bare all the tools you need to turn into an absolute juggernaut in battle. For me, the journey to become that juggernaut is immensely enjoyable. This is something that a really excellent Square Enix RPG can sometimes (but not always) achieve. Before you know it, you’re giving up sleep and work and nutrition to put all the pieces together. Yes there’s a grind involved, but this only deepens the satisfaction of success. To that end, a trifecta game like Octopath is one I’m not shy about seeking internet assistance for. Rather than feeling ashamed of my ineptitude, I’ll take any edge I can get. 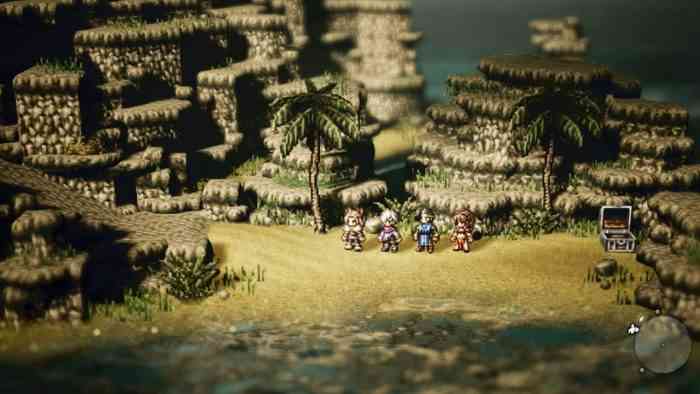 The grind is either torturous or relaxing, depending on the moment to moment combat. Octopath Traveler makes sure that battles are a rich, complex affair. Exploiting weaknesses and setting up combos are essential to your victory. This is on top of knowing which party members and jobs you want at any given time. After you’ve successfully rounded up all your party members, the recommended level for any given stage rises steeply. This is Square Enix testing you. Rather than the time to grind, this is the moment when you double down on your strategies. Suddenly every move counts. If anyone is wasting their turns, it’s a sign that your party needs configuring. In addition, you don’t want to lean on any four members too hard. Everybody has their place, everyone is good for something. As long as your primary protagonist is tough enough, everything else should more or less fall into place.

I could fill an art book with the screenshots I’ve collected. The developers have truly outdone themselves. Every scene and setting is crafted with expert precision to resemble a tilt-shifted story in motion. The light effects, the inclement weather, even the lens flare serves to suck you in. 2D sprites and 3D worlds come together in a surreal illusion of depth. Don’t be fooled by the blocky models. Octopath feels like something both beautiful and tangible, like I could reach into my screen and brush my fingers against the buildings. Aesthetically, this is a potent mix of nostalgia and high-powered tech. If you were to sweetly dream of your favorite SNES game, this is what your mind would spin up. A wondrous tapestry adorned with vibrant characters in a gorgeous setting.

The storybook isn’t perfect, although it’s close. I have a long-held grudge against English voice acting. Maybe it’s just my stubborn otaku brain demanding what can’t be achieved, but some of the performances just felt off. Normally I don’t hesitate before switching to Japanese, but Square Enix games can deliver a pretty stellar performance. This isn’t one of those times, but thankfully it’s an easy fix.

Telling eight different stories reveals another weakness in Octopath Traveler. Some are good, some are lame, but they never add up to anything truly great. Rather, it feels like the writers were hoping that the sheer volume of stories would make up for any perceived cracks in the facade. I loved Primrose and her story of revenge. Olberic acting as a mentor and father figure was also a real delight. Tressa’s quest to be just, a super great merchant fell flat, however. While the disparate stories never really combine, the game sprinkles these little moments between the characters throughout your journey. It’s a decent consolation prize, though I suspect it will be insufficient for some players.

Subsequent hours spent playing this game have revealed much about my expectations and its actual identity. At first, I was hoping for something sweeping and grand. But as I played, I realized that wasn’t what was being offered. Instead, Octopath Traveler is an incredible combat system, a juicy progression tree and a gorgeous setting wrapped in the trappings of a traditional RPG. Where I was initially impatient with the amount of grinding I was in store for, I’ve since come around in favor of it. This game re-awakened that long-lost feeling of a zen task to complete, a high-tension rock garden around a blossoming fountain of childish joy. This kind of RPG may not be for everybody, but it is one thousand percent for me. If you too long to recapture what I’ve described, you would be a fool to turn down Octopath Traveler. 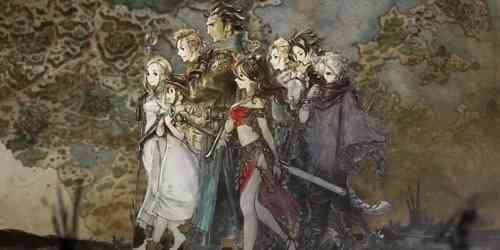