When asked to review No Time To Explain for the Xbox One I had an inclination that I had previously seen it somewhere else. After a bit research I discovered that it was originally developed and released as a flash game on a website called Newgrounds, a site that I’d visited a few times before. With its success in early 2011, the creator, Tom Brien, teamed up with Alex Nichiporchik to start working on a more robust version that released later that year. After successfully bringing the game to PC and Mac we finally have a console version for gamers to enjoy, so let’s jump in and see how well it transitioned to the current generation of consoles. 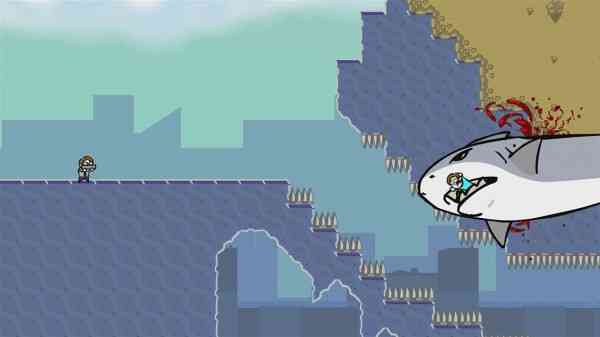 The first thing people will notice when popping into this game, aside from the humour, are the visuals, which take inspiration from a lot of classic 8-Bit (and a smidgen of 16-bit) platformers. The graphics are sharp but aren’t anything new. It will be nice when these throwback type games try some new things when it comes to the graphics department as I feel the ‘revival’ genre is getting over saturated and it’s time for something new, literally.  That being said, the over the top characters, be it the unnamed hero of the story or the insane boss monsters, do a little bit to redeem the ‘throwback’ saturated feel, but just barely.

The soundtrack on the other hand is a pure gem and you can give it a good listen to it HERE. Although it still follows in the vein of a retro feel, the music is something new and I sure think that some of my DJ friends would probably love to work some of it into 8-Bit remixes in the future. Along with music is the humorous voice work. From the main character’s voice in the game you hear some great witty quips at the beginning of some levels, and you’ll also hear some “interesting” screams of pain and horror as the boss monsters eat or chomp your character up.

“There are redeeming qualities in No Time to Explain, such as the music and some of the character designs, but the rest of it doesn’t translate well to console. The controls are sluggish and impractical while the majority of the visuals could use some more oomph too.”

Being a 2D platformer I was excited to play No Time to Explain and hoped there would be some great humour throughout the story. There were some laughs now and then but I found that the original material made me chuckle less than I expected. The game starts off with your doppleganger from the future busting into your house yelling, “No Time To Explain” as a giant lobster claw grabs him causing his weapon to fall onto the floor in front of you. After picking up the weapon you run after your double which leads you onto an adventure of time portals and alternate dimensions.

An important feature in a game like this is twitch controls and unfortunately NTTE just doesn’t stack up. The controls are clunky making this game annoying to the point where I had to quit playing numerous times due to frustration. At first I thought maybe I was doing things wrong as this was a new game and perhaps there was a learning curve. Unfortunately the controls were just not precise enough, and as the game is played primarily as a twin stick style the controls are not responsive or quick enough when compared to similar games with similar control styles. I even checked if there was a way to customize things to make it suit my needs a bit more, but that wasn’t available either.

There are a multitude of different weapons that you use to attack creatures and these weapons also act as a way to propel your character around the levels to get to the portal at the end. The main weapon that you use throughout the game is a laser-based weapon where the impact from it can push you across and over objects. There is also a shotgun that launches you like a football through the air and a grapple-like weapon that you use to connect to points in the level to reach your destination. Some weapons also combine with a lot of different level mechanics in the game like floating pools of water that you have to jump up through to get to another pool of water and so forth. Of course we can’t forget the hazards that are found throughout such as acid pools, lava, spikes (some that are hidden too), falling rocks, and of course the natural hazard of all platformers: gravity plummeting you to an untimely death. 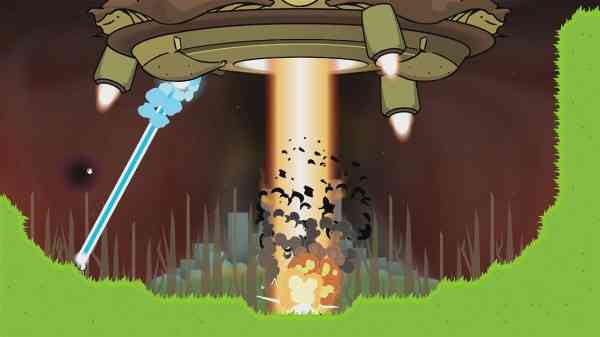 As I noted earlier, the controls are not the best, but on some levels you can forgive this as you respawn on the last piece of land or platform you were on. This is pretty forgiving and you’re able to get through the levels at a pretty good pace figuring out the quirks that might have had you stumble. The boss levels on the other hand are quite unforgiving and drove me nuts as I died upwards to 20 times on certain ones. As the levels themselves can be forgiving with the respawn, a whole level reset when dying during a boss battle is quite the change.  You do get three lives (which really isn’t enough) to complete the boss though, so there is some ‘silver-lining’ here. The boss battles are pattern based and you do eventually get to know the patterns to complete them, especially when you die a whole load of times. It just begs me to ask “why bother making one part of the game more forgiving then the other?” If a game is going to be hard as hell then I can deal with it, but I don’t enjoy a yo-yo difficulty range that just makes me want to rage quit.

There are redeeming qualities in No Time to Explain, such as the music and some of the character designs, but the rest of it doesn’t translate well to console. The controls are sluggish and impractical while the majority of the visuals could use some more oomph too. At the end of the day, if you are not a DIE HARD (caps for emphasis) fan of retro type games, I think you’d best stay away from this title as the negatives outweigh the positives.

Next The Talos Principle: Road to Gehenna Review – A Brilliant Expansion With Formidable Puzzles
Previous Red Goddess: Inner World Review – A Classic Platformer with Style All its Own