I want to be great at Ninja Shodown. It’s not my usual genre, and I don’t tend to get into multiplayer party-style games, but something about Ninja Shodown drives me to want to, in the parlance of the Internet, “git gud.” However, even as I improve with practice, the game has a way of keeping me humble. It’s an incredibly fast-paced arcade-style action game with attitude to spare, and it demolishes me with astonishing regularity.

Ninja Shodown’s main mode is Arcade, which puts you and up to three friends (or you as a solo ninja, if you prefer) against wave after wave of increasingly difficult baddies. Most of the time, enemies aren’t actively seeking you out, taking a hands-off approach to murdering you–merely brushing against one with anything but the sharp side of your sword turns you into a bloody husk. Your first opponents are slow and dull, running from one end of the screen to the other, occasionally disappearing through doorways and reappearing in other doorways, with minimal AI to speak of. Your next foes are much the same, but greatly increase their speed and sprint at you, and future enemies even come with defensive capabilities. Progressing through each wave rewards you with points and occasionally extra lives, which are very necessary, due to the aforementioned bloody husking that happens so frequently. After several stages, you’ll enter a new level with a different layout and new enemies, such as Sumo-style fighters that take multiple hits to take down. While part of me wishes there was a bit more to the AI than foes simply running at varying speeds and popping in and out of doors, it’s hard to imagine how much more difficult the game would be if your enemies were as smart as they are deadly.

When it comes to taking down your deadly opponents, despite the difficulty, you at least won’t feel like the controls are hampering you. Within minutes you’ll be swinging your sword and throwing shurikens with ease. There are also some hidden moves the game doesn’t go out of its way to tell you about, and they’re quite powerful. The key is to experiment. Mastering your entire moveset will make you a force to be reckoned with.

“The game’s variety is bolstered by its style and sense of humor.”

Your ninja is made even more powerful thanks to a healthy variety and frequency of weapon drops. If you had to rely only on your sword, chances are you wouldn’t make it far. The bonus items that spawn across the field of play give you a huge selection of different consumable weapons, from the realistic–such as kunai or a handgun–to the ludicrous–like a rocket launcher and ninja magic. Shurikens pop up around the screen as well, and they make a great, consistent projectile weapon to use when the screen’s getting just a little too full of insane ninjas.

If you’re tired of the game’s brand of insane ninjas, invite over some saner ones in the form of your friends. As I mentioned, you can tackle Arcade mode in up to four-player couch co-op, but there are other, more competitive modes as well. 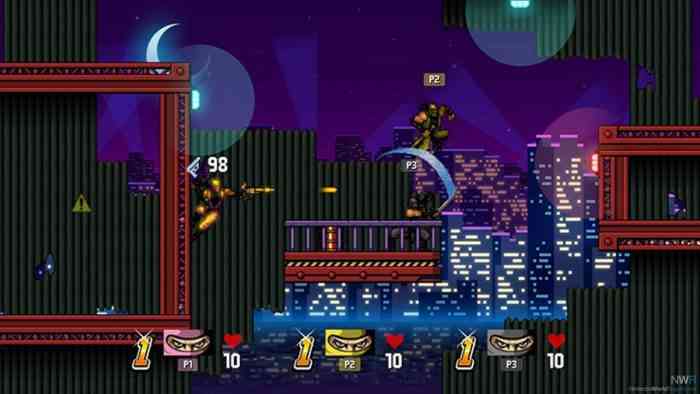 There are four competitive multiplayer modes offered here: Last Ninja, Battle, Coin, and Crown. Last Ninja is your standard deathmatch, last-player-standing game style. Battle is more of a tug-of-war, as each kill nets you a point and each death takes one away, and the player with the most when time runs out is the winner. Coin tasks you with breaking statues and collecting as many of the coins that spill out as possible–but dying causes you to drop a bunch, Sonic-style, and your opponents can clean you out. And finally, Crown — you earn points the longer you hold onto the crown, but the downside: you can’t attack while wearing it. This turns each match into a hilarious game of keep away.

The sheer variety of gameplay modes (including an Infinite mode for the truly hardcore), stages, and layouts is a huge plus for Ninja Shodown. As a party game, it should hold your friends’ attention through some extended play sessions. Nothing is more satisfying than blasting your buddy from across the screen with a rocket launcher, or using a stage hazard, such as an exploding barrel, to reduce them to a bloody mess.

The game’s variety is bolstered by its style and sense of humor. Your ninjas are portrayed as a bunch of goofy dudes. There’s a dedicated Dab button. The announcer frequently insults you when you die. On top of all that, the gore is so over-the-top it’s almost funny.

That’s not to say it’s all fun-and-games, free of frustrations. The game has a few: sometimes, the game feels a bit too random, with enemies popping in and out of doors with deadly consequences. Few things are more frustrating than finding yourself in front of a door that an enemy suddenly leaps out of, killing you instantly. Also, the fact this game is on the Switch is both a blessing and a curse. Playing single player in handheld mode is fine, though a bit more difficult than playing on a big-screen TV, due to the small size of the sprites. Trying to play multiplayer in Tabletop mode is an exercise in neck pain and frustration, with everyone leaning into the tiny screen, trying to make out who’s who.

I’ll probably never be a pro at Ninja Shodown. It requires twitch reflexes and super-fast thinking, both of which have been sapped out of me by decades of RPGs and walking simulators. However, even if I’m not the best, I’ll admit it’s a great time. I sank hours into single player, despite my frustrations, and I had even more of a blast with the multiplayer. The Switch is proving itself to be a worthy home for fun party games, and Ninja Shodown is a strong addition to that lineup. 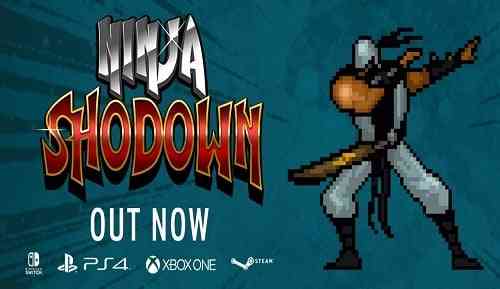 
EleMetals Rocking onto Nintendo Switch and Xbox Consoles This Year