Without a doubt, Assassin’s Creed Origins has been one of the most anticipated games of the year. Now even though I’ll be the first to admit that I haven’t played every game in the series and consider myself more of a casual player than a hardcore fan, I couldn’t help but get excited over all of the trailers; to see where it all began. With a few missteps along the way, ahem we’re looking at you Unity, Ubisoft regains their footing in the popular Assassin’s Creed series, and in Ancient Egypt no less!

Assassin’s Creed Origins takes place in the sprawling landscapes of the Egyptian desert many, many years ago and tells the story of Bayek, the Medjay. This tale begins on a day of celebration that quickly turns sour, and soon enough Bayek, a family man, and protector of the people, turns into a hardened assassin. Origins takes us back to the beginning of the Assassin Brotherhood, and in a twisted story of corrupt leaders in Egypt, the order of the ancients, you will uncover the reasons behind Bayek’s need for vengeance. His journey is one of passion, love, and revenge and though it starts off quite slow, by the time you’ve played through a few hours of the story you will feel completely invested in each and every character.

There is a depth to Origins unlike any of the other games of the series, and Ubisoft absolutely nails every aspect of the level design here. Besides an enthralling core narrative, which takes anywhere from just under 30 hours to 35 hours to complete, the side missions do not feel like a filler and in fact, feel just as meaningful as the rest of the campaign. Sure, they are used to help you level up, gaining better skills and gear, but they really show the level of oppression the people of Ancient Egypt dealt with on a regular basis. Not only is this a story of Bayek and his family, but also one of culture, political maneuvers, and assassinations that took place during that time period. In addition to journeying all over Ancient Egypt in the most expansive map to ever grace Assassin’s Creed, learning about monarchs like Cleopatra and Julius Caesar, you will also get to take part in what makes ancient Egypt so awesome. From gladiator fights to chariot racing, you will get to experience Assassin’s Creed like never before. And let’s be honest, who doesn’t like to take a break from killing every once in a while?

“graphical masterpiece that is nothing short of breathtaking.”

If you’ve played any game in the series you’ll know that there is a future-esque component of each one. Origins is no different. Although it doesn’t happen too often, you will discover that an archaeologist named Layla, is trying to uncover the story of Bayek and his wife Aya. Although I usually can do without this aspect of the game, I found the dynamic within this latest installment quite interesting. Within Origins, the Animus is being used in a different way than previous games, which in itself is quite refreshing as well.

Ubisoft has done away with eagle vision and replaced it with the ability for Bayek to view the land through the eyes of his eagle Senu. While Bayek is still able to find loot and other treasure in nearby rooms, allowing Senu to scavenge the land and pierce through buildings to find loot hundreds of feet away is not only efficient but smart. Make sure to hide while using Senu however, because if you are in a restricted area, Bayek can still be shot, stabbed and beaten. There is also a large ability map that allows you to earn more skills as you level up in which you can develop three different areas. You can become a hunter, a warrior, and a seer, all of which come with unique abilities. For example, if you unlock certain skills on the hunter side, you can stun enemies while controlling Senu.

In addition to this ability map, Assassin’s Creed Origins allows for a large variety of customization. Players get to choose different bows, shields and melee weapons, as well as other tools such as sleep darts. And of course, what kind of fun would it be without different outfits? From various guard uniforms to be earned to a slick gladiator outfit, you should have plenty of combinations to choose from. By the time you’ve played through a few hours, you should have some gear that makes you look like a complete badass. 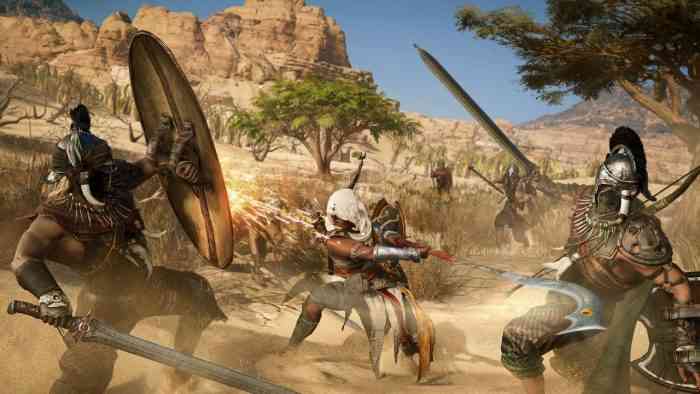 While Origins is mostly a single player experience, there is a small multiplayer component available. If you come across a dead body in the game, and your map shows off a blue marker with a player name, you have an option to avenge their death. I never took the time to do so while playing the campaign, but if you want to test your combat abilities outside of the actual storyline, here’s your chance. With that said, I never came in contact with anyone else playing the game, so even though it’s an open world RPG, it plays more like a less interactive version of the Destiny campaigns in this regard.

Now if we’re comparing titles here, I should mention that while Ubisoft has boasted that the combat system would be improved from previous games in the series, there are aspects that certainly don’t feel this way. Considering just how much of an impact this combat system has on the game overall, this is more than a little disappointing. Giving credit where it’s due, Ubisoft has done a fantastic job with the ranged combat, allowing players to adopt different bows and styles of play that are just plain fun to use. Unfortunately, the same can’t be said for the close quarters combat. Although one on one combat is alright, when fighting against more enemies, combat within Assassin’s Creed Origins just feels clumsy. Even though there is a dodge mechanic, it certainly doesn’t help avoid all of the weapons coming your way. Gone are the days of being able to maneuver your way between enemy combatants, instead of becoming stuck in something I like to call the dance of death. And no, it’s not as cool as it sounds. It really just ends in your death, time and time again.

Of course, this whole dying thing also depends on what level of difficulty you’ve chosen to play on, which you can change at any time in the main menu. If you’ve decided to play on easy for example, the AI is a bit dumber than if you’ve decided to play on normal. The enemies act exactly as they should for each level, charging at you and making a ton of noise once they’ve spotted you, and backing off when you manage to make it into the shadows or some type of greenery.

One of the best parts of Assassin’s Creed Origins is just how well Ubisoft has executed every aspect of the graphical design. From the vast desert landscapes to the lush green forests, the detail given to each and every grain and leaf is absolutely stunning. And this isn’t an exaggeration either. There were times when my husband asked if I was watching a movie before realizing that no, it was Assassin’s Creed Origins. With that said, the cutscenes that break up the main story and captivate you the whole way through, actually do look like something out of a large budget movie! Unfortunately, there are some glitches and bugs that rear their ugly heads far too often, getting in the way of the beauty of the game, which include frame drops and freezing. Hopefully, these issues are fixed quickly because nothing else can take away from how amazing Origins looks. 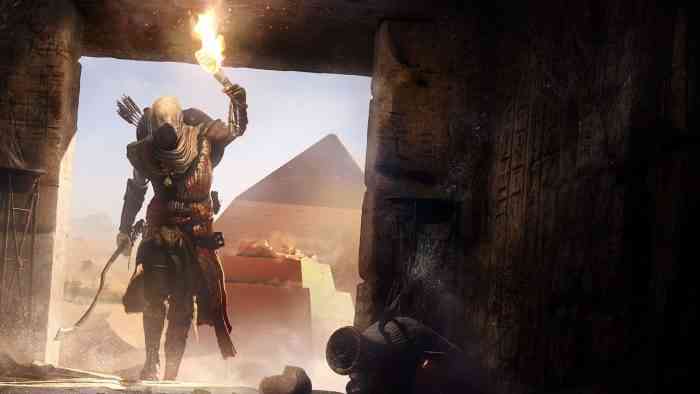 And it sounds just as amazing too. From a soundtrack that feels rich with historical culture and value, the atmosphere developed is one of utter purity to the times of Ancient Egypt. Within the first five minutes, players will discover that everything sounds so crisp. From walking along coins and other treasure to galloping along the sand dunes, never before has everything in a game sounded so perfect. The only thing that could possibly bring down the value of the sound within Assassin’s Creed Origins is the voice acting and rest assured it is superb. There isn’t one character I can think of off the top of my head I didn’t like the sound of. After playing the campaign, it feels like Ubisoft traveled back in time, bottled the essence of the Ancient Egyptians and brought it back with them to tell this epic journey through time.

If you’ve been a fan of the series since the very beginning, let your faith in the series be restored, because Assassin’s Creed Origins is definitely the best title to come out of the popular series in a long time, if not ever. While there are still a few issues to be found within the game, the majority of problems found within the last few iterations in the Assassin’s Creed series have been replaced with nothing but beauty and adventure. Ubisoft has brought us a not only a captivating story in the perfect setting of Ancient Egypt but also a graphical masterpiece that is nothing short of breathtaking. 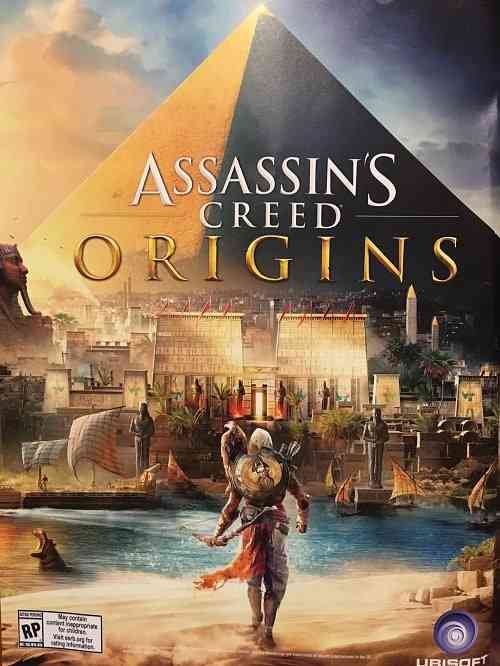 Thymesia Review – If Sekiro and Bloodborne Had a Baby