New Tales From the Borderlands Review

If you enjoy well-written humor in your games, the last couple of years have been generous. Psychonauts 2, Guardians of the Galaxy, Tiny Tina’s Wonderlands and now, New Tales of the Borderlands are not just funny, they snap and crackle with great acting and perfect comedic timing. Gearbox is on a roll. Tiny Tina’s Wonderlands was a delight, and New Tales from the Borderlands might be even better.

Right Where We Left Off

The original Tales from the Borderlands — a spinoff of the popular post-apocalyptic action series — appeared around 2015. It was developed by Telltale, and a few veterans of the first game joined Gearbox as advisors on the sequel. While the new game has an entirely fresh cast of main characters, a few supporting players make return appearances in New Tales, including Rhys Strongfork, CEO of of evil megacorp Atlas. Still, many players will be coming to New Tales from the Borderlands without having played the first game. They’re at no disadvantage.

The new game stars a trio — really, a quartet — of would-heroes. Anu is a pacifist weapons designer for Atlas; Octavio, Anu’s adopted brother and an inept and slightly shady entrepreneur; and Fran, a mobility-assisted operator of a frozen yogurt stand, and Octavio’s employer. The fourth member of the center squad is LOU13, a British-accented assassin-bot. The narrative is set in motion when competing weapons manufacturer Tediore invades Altas’ orbiting headquarters. Anu escapes to the local planet, Promethia, to search for Octavio. Tediore attacks Promethia, searching for a legendary Vault, which may or may not contain alien weapons technology. Our heroes set out to stop them. 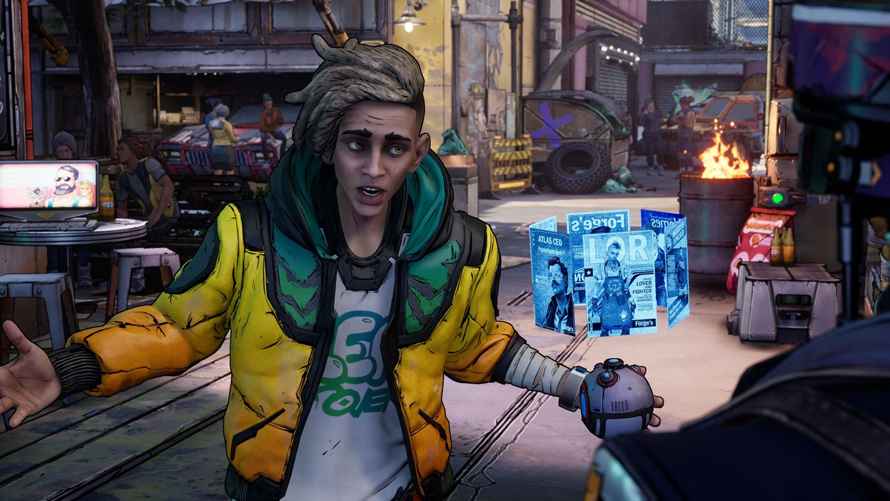 New Tales from the Borderlands presupposes the player has a bit of familiarity with Borderlands’ lore. But even players with no experience in the Borderlines will do just fine. The game explains the critical bits of backstory. Veteran Borderlands fans will just have that much more fun. The narrative is told in five episodes, but unlike the original, the release includes all of them. No waiting for the next chapter to drop!

The Borderlands franchise has always straddled the line between humor and action. The mainline games, though action-focused, contain generous amounts of parody and cultural satire. Telltale’s Tales from the Borderlands and more recently, Tiny Tina’s Wonderlands, leaned more heavily on the jokes. The original Tales was an adventure game with branching dialogue choices and quick-time events. Mechanically, New Tales from the Borderlines is nearly identical to the first game. Though the big-picture story arc is set, there are lots of smaller choices that impact the experience. Usually, these choices come down to dialogue options on a timer. Most of the time, the choices are clear in their emotional or moral implications. 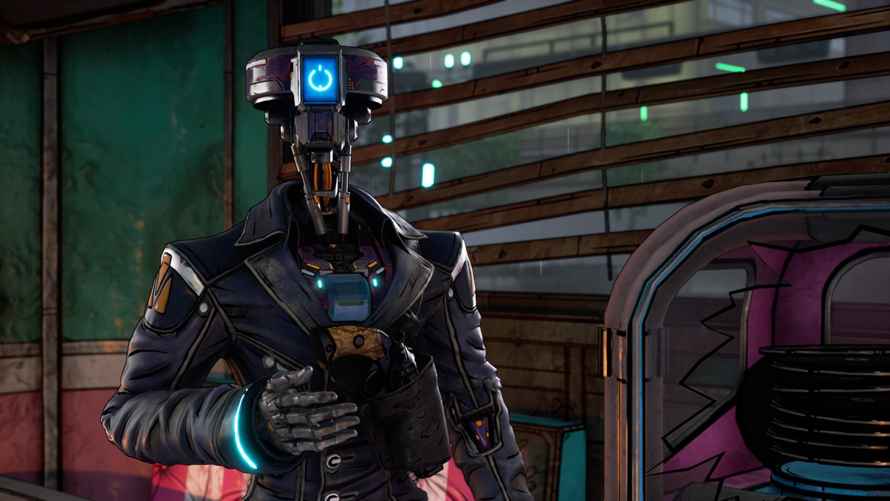 In addition to the branching story and dialogue, New Tales from the Borderlands has a number of quick-time events for things like dodging and shooting. The QTE’s give New Tales a momentary action-game vibe. Depending on your settings, these can require pretty fast reflexes, though the difficulty can be turned down. While the QTE mechanics work to keep the player engaged and part of the action, they’re also the least interesting part of the game. Finally, each of the players controls some specific tech. Anu has a non-lethal gun that transports targets into other time/space dimensions. Octavio has a wrist computer, and Fran’s hover chair has a freeze-ray weapon.

Though not integral to the main plot, New Tales has a selection of mini-games. One of the most entertaining is Vaultlanders, in which the player battles with collectable 3D figures from Borderlands lore. New Tales from the Borderlands also introduces a large cast of secondary characters that appear throughout the chapters. These include adorable pet Ratches, taco stand owners, demolition experts, and hilariously written Rippers.

Like the best films or TV shows, New Tales from the Borderlands understands the value of clearly drawn characters. The game takes a lot of time at the beginning for us to get to know Anu, Octavio, Fran and LOU13, their connections to each other, and how they will come together. The opening chapter might be the best example of exposition and character-building I’ve seen in a game. New Tales is a comedy, so of course the characters are, to some extent, exaggerations and larger-than-life in the same way superheroes are. They’re all deeply flawed, but equally ingratiating. I’d say they were “lovable” but that implies a bit of after-school special sentimentality that’s not really part of the game. There is, however, emotional range. Despite the rat-a-tat pacing and humor, there are moments when the jokes drop away.

Speaking of humor, it ranges from broad jokes to very subtle social satire. Humor in games is always an alchemical reaction between the player’s sensibility and the game’s writing and performances. All humor-based games — even the best of the best — have a pretty high failure rate in the joke department. New Tales from the Borderlands hits far more often than it misses. The humor is extremely smart and only occasionally lowbrow.

Equally successful are the game’s performances. The lead vocal performances are absolutely fantastic, aided by exceptional performance capture that zeroes in on expressive facial nuance. I found the characters, writing, and performances far more entertaining than the vast majority of recent superhero films.

Great to Look At

The Borderlands franchise has unmistakable art that is stylized but detailed and effective. It has also evolved, so Borderlands 3, Tiny Tina’s Wonderlands, and New Tales all share the same look. It’s colorful and packed with little things to notice, and lots of subtle jokes or references. While I wouldn’t want every game to share the Borderlands aesthetic, it has always seemed to me to be a perfect match to the attitude of the games. The cartoon-like visuals do a lot to soften the moments of extreme violence that’s even part of New Tales.

I’ve already praised the voice acting in New Tales from the Borderlands — once again, it’s fantastic — but sound design in general is very good. The music is also excellent, but rarely draws attention to itself. Instead it weaves into the texture and perfectly supports the action. 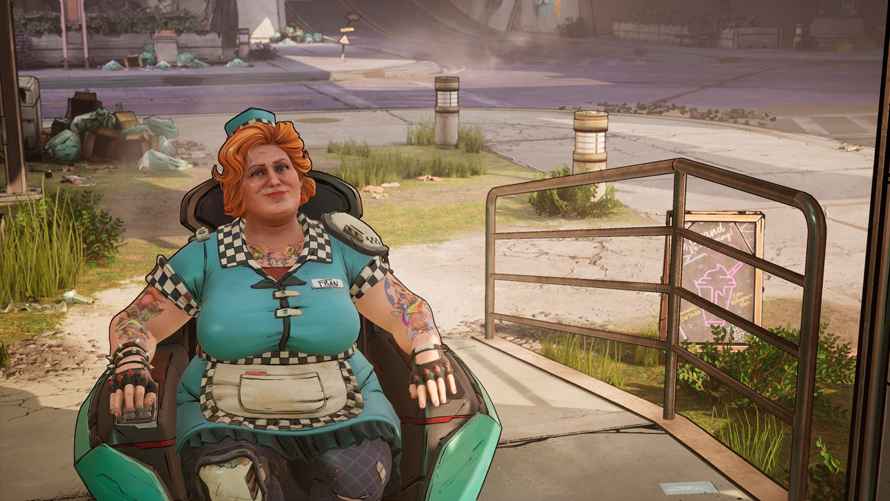