If there is one thing that Nintendo is synonymous with, it is Mario and platform games, be it 2D or 3D oriented.  Since the days of the NES they have shown the world how they are masters at this craft.  Heck, so many others have been compared to the Mario standard it is mind numbing.  Most recently the 3DS gets a classic Mario 2D platform game for all to love.  I have had the opportunity to play New Super Mario Bros. 2 over the past week or so, and I have to say that although it is classic Mario, it brings nothing new to the table, but in some ways that is not such a bad thing.

The story is typical Mario fare, as Princess Peach has once again been kidnapped, but this time the Koopalings have taken her and Mario once again sets out on an adventure to save her.  You’d have to think that after all these years he would get tired of having to save her bacon over and over again.   The Koopalings are not your average enemies, as you face more then one throughout the game.  The best way to describe them is that they are young right hand men….errrr Koopas, who want to prove they have the right stuff.  Regardless, you set out to save that famed damsel in distress once again.

So, how does Mario set about saving the day?  He relies on his old tricks of running, jumping, stomping, and using a power up or two to show all those who stand in his way who is boss.  As I started to play I couldn’t help but get a sense of “been there done that”, and although this feeling was very prevalent, it was not a totally bad thing as I felt comfortable at the same time.  It was a strange sensation, as although I knew I had done this before, it just felt right in so many ways. 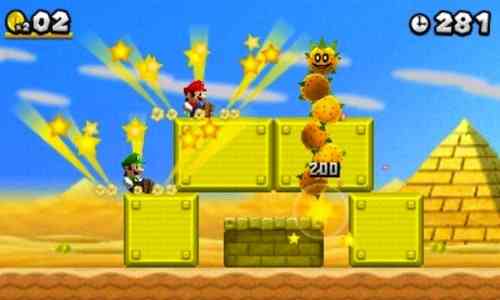 As with past Mario games, you will navigate the game’s various stages with precise jumps and moves, and some puzzle solving now and then.  You can race through each stage as quick as you want, or you can try to explore every nook and cranny to find all the secrets in each stage.  There are a total of 80 stages for you to explore too, so there can be a lot to do.

So, what is new you ask.  You will notice that there is a much larger emphasis on collecting coins this time around.  Yes, all Mario games before this have emphasized coin collecting, but in this game the emphasis literally slaps you in the face.  You will find that there is a power up that turns Mario all gold, and everything he touches becomes more valuable, even making the famed Koopa Shell more enticing as you knock it off a Koopa, send the shell on its merry way, and it leaves a trail of coins for your collecting pleasure.  You can also ‘wear’ a gold block throughout various sections of some levels, and by wearing this gold block you create your own trail of coins that you “self collect” as you run, jump, and move about the level.   There is a gold coin counter that keeps track of your total coins collected, and you can view this “gold coinometer” in the main map screen.  We were told back at E3 that once you collect a million coins something special happens but it is going to take quite a bit of time to collect all those coins so we don’t know what it is yet.

There is more to playing this game then just stomping on enemies and rescuing the “damsel in distress”.   There are 3 star coins in each level, and collecting all of these throughout the whole game can add up to be quite a challenge.  Although some of the coins may be easy to get, others will require you to pull together every platform skill you have to reach it.  I found that some of the star coins involved a risk/reward analysis, as I really had to weigh whether or not I wanted to even attempt to get it.  Some of these coins are well hidden and will require some serious exploring to discover them.  I think that completionists will really enjoy this aspect of the game given it adds gameplay value.

Of course it wouldn’t be a Mario game without power ups, and you got em’ here with such classics as the fire flower, invincibility star and raccoon leaf.  You’ll even find the mega and mini mushrooms in a few shops throughout all the levels.  And like Super Mario 3D Land that came out last year, the white Tanooki suit makes a return, so if you die too many times on one level you will be impervious to enemies making it a bit easier to get through the level, but be forewarned as you will still die from lava or poison purple goo. 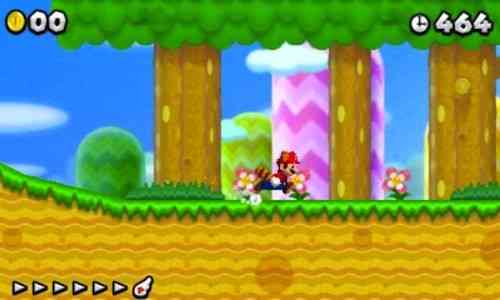 I have to say that Super Mario Bros. 2 handles very well.  From running, jumping, and butt stomping to floating in the air or swimming through the water, control is spot-on and as good as any 2D platform game gets.  Should you die, as you will do a few times throughout your adventure, it won’t be due to the control.  I found that most of my deaths were a result of my own stupidity, or just being tired and not paying attention.   This is somewhat off-set by the fact that there are SO many coins to collect that you should have a nice collection of lives saved.

New to the world of New Super Mario Bros. is the Coin Rush mode.  This is the competitive aspect of the game as well as those looking for a bit of a hardcore challenge.  You try to collect as many coins as you can over three levels.  The trick here is that you only have one life and you have a strict time limit, so there is no freedom to explore.  There is the ability to play the mode with the white Tanooki suit or without.  After you’ve completed the levels you can trade data via the 3DS’s StreetPass feature, and you can challenge the StreetPasses that you have received while other game owners can do the same with your scores.  It adds a bit of competitiveness; however, there are no leaderboards so only you’ll know how well you did.

Nintendo thought it might be neat to add a cooperative mode for New Super Mario Bros. 2.  Now I have to admit I did not get a chance to play this given that there was no one around that I could play with.  What I can say is that each player will get his or her own screen given that you each play on your own 3DS.  If I get a chance to play this mode in the very near future with other staff then I will try to update you on this feature. 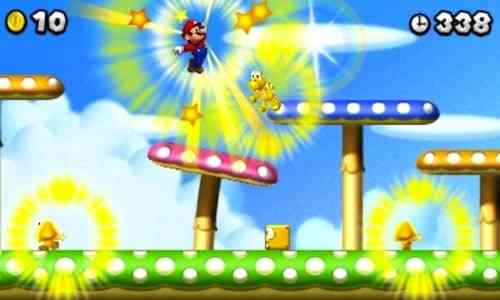 Visually New Super Mario Bros. 2 is a solid looking game.  Colours are bright and vibrant and there is the usual Mario attention to detail found here.   You’ll also find the usual level designs including lava, snow, or sand based to name a few.  There are no technical issues to be found in this game either, so feel free to enjoy the visual experience.   Given that this is a 2D based game, the 3D slider only adds depth to the level’s backgrounds.  I found that I enjoyed the game with or without the 3D slider on.  Personally the depth looks cool, but it blurs out the backgrounds more then I would have wished.  Regardless the game is playable in both modes and both look decent.

As for the games audio, while there seems to be nothing ground breaking what is there gets the job done well.  The music is very reminiscent of Mario games of past, and as with the overall feel of the game, the music is very familiar but enjoyable.  You will find that it changes up depending on the level you are on too.  Of course as with any Mario game, it wouldn’t be Mario without the voice of the red hatted plumber, and alas he is back and prevalent as ever.  As for the sound effects, the oh so familiar sound of such things as power-ups activating, stomping on enemies, and collecting coins is present and accounted for.  Bottomline, you know you are playing a Mario game as it sounds just like it should.

At the end of the day New Super Mario Bros. 2 is a good game, plain and simple.  With solid visuals, familiar but tight gameplay, and that famed “Mario-esque” sound, you really can’t go wrong.  That being said, I am sure some people may argue it brings nothing new or innovative to the franchise, and in many ways they are right, but in the end it is a good game, and that is what matters.  If anything you will enjoy your time with this game as Mario continues to show he deserves a spot in your line-up of games to play.