When I sat down to play Darksiders 2,  I wasn’t expecting much beyond what the first game had accomplished.  That is a competent Zelda-esque third person adventure game with an intriguing but sparse storyline, loads of exploration and a pretty tight combat system. Don’t get me wrong, Darksiders was very well received by the press and gamers alike and I had a ton of fun with it, but I wasn’t prepared for the surprising amount of depth and complexity found in the sequel.  It’s more then just another iteration of the same content, this one feels like an entirely new IP that borrows the best from the original and merges it expertly with a host of new features derived from other titles. The end result is an expansive, heavily fleshed out action-adventure RPG with tons of character; a game more akin to the likes of Kingdoms of Amalur or Fable then it’s predecessor, but with just the right amount of grind and a compelling story that grabs you and doesn’t let go.

The game takes place shortly after the events of Darksiders.  The war is over.  The angel’s and demon’s one hundred year conflict that destroyed humanity and left their world in ruins has all but come to an end thanks to the actions of War, one of the four horsemen.  Emerging victorious against all odds in a quest of vengeance and betrayal, War’s role in the Apocalypse is still under scrutiny by the kingdoms of heaven and hell alike.  Chained up in the fiery depths below by the Charred Council for crimes he didn’t commit, War’s only chance for salvation lies in his brother, the second horsemen known as Death. Convinced of his brother’s innocence, Death embarks on an ironic journey to bring back life, not death, to the kingdom of men in hopes of returning balance to the realm while clearing his brother’s name in the process.  It won’t be easy, The Reaper will soon learn that he and his brethren have been mislead for far to long. That devious, dark powers linked to his past are at play and only he, with his skeletal horse Despair at his side and his dual-scythes in hand, can stop them. 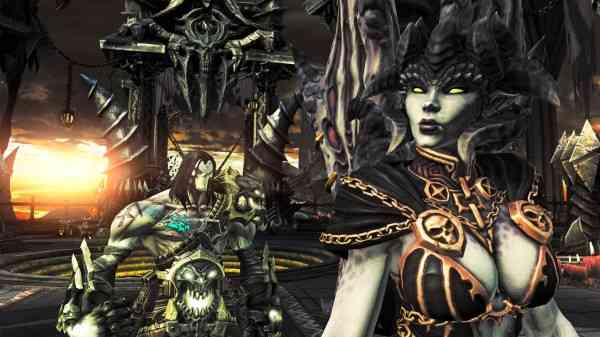 Like War, Death is capable of performing devastating attacks on both the ground and in the air.  While War was powerful and diverse in his own right – a walking tank of destruction – Death is the picture of agility and grace, stringing lightning fast combos effortlessly against his enemies.  Death can also dodge at anytime while attacking, and perform special wrath abilities to give him an edge in combat.  The Reaper will often face entire hordes of enemies at one time, a mix of regular and elite that won’t hold back while their buddies are attacking.  Taking down the harder enemies first is lot simple with the use of the targeting system; it’s a bit clunky but it gets the job done. He can even fight on the back of his horse, which works pretty much the same as War’s horse in the first game.

Scythes aren’t the only weapon in Death’s arsenal, as Darksiders 2 introduces a whole new loot system with a variety of secondary weapons ranging from axes to hammers, from claws to swords and more.  Death will also find various sets of armor that not only grant him buffs in defense and offense, but modify his look and style with each piece equipped.  Every opponent defeated will drop gear and gilt (currency) for Death to grab, the loot colored in the familiar World of Warcraft trend of powerful greens and epic purples, you may even find a legendary weapon or two. Occasionally, you will discover rare “possessed” weapons that consume other weapons to gain stackable attributes like elemental damage and increased critical hits, making these blood thirsty tools of slaughter perfect for customization.  When upgraded to their max level, possessed weapons (highlighted in red) are amongst the most potent weapons in the game.  Whatever the loot, it’s all made easy with a handy auto-loot option that picks it up when you pass over it. You can toggle it on and off in the settings.

Unlike the leveling system for War in Darksiders, Death doesn’t collect souls to upgrade his attacks. Instead, he collects gilt from enemies, destructible objects and chests (also from items sold), which he can then spend to purchase new weapon combos from experienced trainers he meets.  The levels he gains from experience goes instead towards Death’s skill tree, which is split into two branches – Harbinger and Necromancer. Every skill point you spend will unlock new wrath abilities, like the Teleport Slash attack and Exhume for crowd control.  Gilt, by the way, is also used to barter with traders and smiths for weapons, armor and talismans; as well as Health and Wrath potions, which you’ll want to stock pile before heading out on quests. You may even come across the twisted, demonic familiar known as Vulgrim, peddling colored “mystery boxes” with surprise loot inside – often well worth the cost and risk. 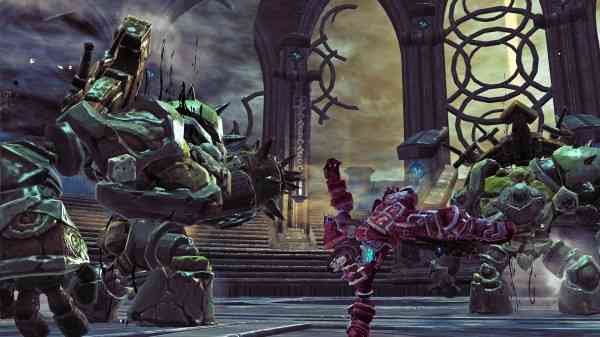 If you’re a completionist and love collectibles, Darksiders will keep you busy finding lost pages, boatman coins, magical gemstones, ancient relics and other treasures that can be turned in for rewards; including gilt, skill points and even permanent attribute boosts to Death’s stats.

Like War, Death will acquire specialized gear as he progresses, like the Death Grip and Voidwalker; special items needed to access hidden areas containing chests, collectibles and even boss enemies for side missions. Some of these tools can even be used in combat for pulling enemies towards you or summoning allies to flank you in a fight. You’ll need this stuff not only to find secrets, but to overcome obstacles that block your path.

Traversing these obstacles also depends on Death’s nimble reflexes and acrobatic skill; climbing up ledges, running along walls, spider-maning vines, jumping from pillar to pillar – he’s a lot quicker then War was and is easier to guide and navigate through the various intricate labyrinths.  His climbing ability is pretty competent, but like the first Darksiders or even Prince of Persia, it’s not perfect.  You’ll still require a bit of finesse to avoid falling into pits and such, but it’s far improved from the first game.

Like any Zelda influenced action game, backtracking is a must if you want to collect everything and max out The Reaper’s power and equipment. Fortunately, Darksiders 2 has done away with the pointless Serpent Hole method of travel and opted for the fast travel system similar to that of Skyrim, so heading back to a specific spot to get a chest you missed earlier is generally painless.  They’ve even added a nifty travel back to town option when in dungeons too, so you can sell off trash items, restock on potions and upgrade weapon combos at your leisure. 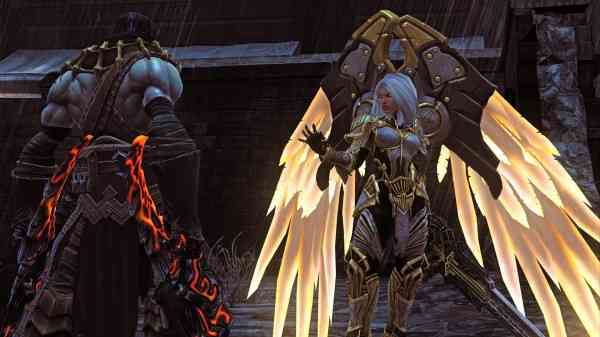 In Darksiders 2, Exploration is the name of the game and is easily the most compelling reason to play.   This isn’t like the first game’s repetitive trek from predictable dungeon to predictable dungeon.  You’ll travel across vast open worlds like the Forge Lands and the Kingdom of the Dead, worlds that differ completely in aesthetics and visual presentation yet are equally breathtaking, with a myriad of interesting creatures and people to meet.  The lore in the game is deeper  and more realized, I’m actually motivated to learn more about each land’s culture and people, and the tragedy that’s befallen them; as well as discovering more about Death and the other horsemen, and the part they’ve played in the scheme of things.  The amazing soundtrack, composed by well known composer Jesper Kyd, is really well paced, adding emotion and urgency to key moments and establishing a somber yet magical mood that really suits the games setting.

In noticeable contrast to the game’s high resolution environments and player models, it’s a shame that the character menu and game UI is affected so obviously by the port to PC. The model of Death in the menu as opposed to during game play is shockingly lower quality, and the avatars of weapons and items in the inventory are equally pixelated.  The UI itself is fine though, the text is clear and the menus work as designed – you’ll find a number of useful tabs for looking up combos, tracking active quests on a simple to use map, comparing your stats and scores in the leaderboards, as well as other menus mentioned earlier in the review.

I’ve noticed other graphical oddities, like unloaded textures, screen tearing, a disappearing minimap, skipping character dialogue; even a couple hard freezes that had me restarting from my last autosave. Also, the lack of video options like the first game is disappointing, and further proof of a rushed port; released prematurely to meet the release date of it’s consoled counterparts. 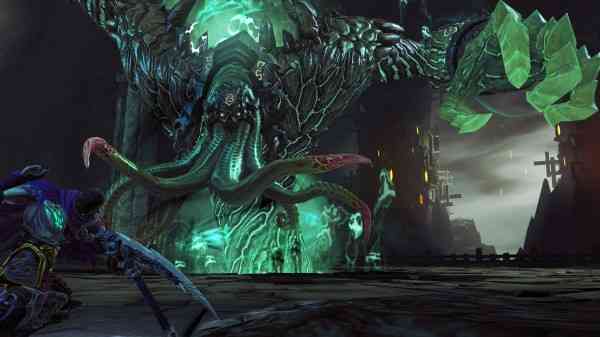 If you tire of the main plot points and just want to grind some ghoulies for awhile, you can head to the crucible after completing the Forge Lands portion of the game.  Death will receive an invitation to battle in the crucible, a combat arena consisting of four phases, each of which will throw 25 waves of enemies at you.  It gets progressively harder as you dominate each wave, and you get the option of opening a random chest after every 5, at the risk of ending the phase and starting over.  Completing each stage results in a big reward, so it’s worth the effort to beat each one, although you’ll need to be at least a recommended level before attempting each.  This is a great way to get some advanced equipment to help you in the main plot.

Not every phase is available when the Crucible is unlocked, you’ll receive access as you progress through the story through the in-game mailing system, which also doubles as a trading post to trade items with other players on your steam list.

There’s been a lot of buzz regarding the mishmash of borrowed mechanics from other games in Darksiders 2.  I say if being derivative means offering players an excellent adventure game that’s entertaining and engaging, it should become common practice.  After all, why re-invent the wheel?  Darksiders 2 rises above the rest as a perfect example of what an action-adventure game should be, and if I had my way, Vigil Games would be making them all.