Imagine waking up one morning to realize the world isn’t quite what you thought it was. That child-like innocence of being protected from the harsh reality of the world stripped away, and yet the only thing you have to keep you safe is… a band of misfit thieving cats? NAIRI: Tower of Shirin is a point-and-click puzzle adventure plucked from the same fabric as your classic Disney tale, and while it can take a little time to get going, the adventures of Nairi are sure to grab your attention and drag you along for the ride.

Developed by HomeBearStudio, NAIRI: Tower of Shirin tells the tale of the titular hero as a young girl raised among the upper-class elite in a world filled with anthropomorphic characters from all species and walks of life. In the opening moments of the game, the royal guard breaks into Nairi’s home and takes her parents away. Narrowly escaping to the merchant’s home across the street in the dead of night, Nairi is smuggled out of town only to be intercepted by a roving band of feline outlaws. Escaping their lair is the first test of the game’s mechanics and you’ll quickly learn the basics of exploration and creative solutions to each room.

Given the games mechanics rely on point-and-click and puzzle solving, NAIRI relies heavily on a strong narrative to propel the game forward and keep the player interested. I do admit that in the first hour or so of the game it felt like it was going through the motions, however once Nairi travels back to the city and enlists the help of Rex, a clever rat and former gang leader, that almost mundane and tired story immediately jumps and the next set of puzzles and challenges are where the hooks really sink in. This is a game rich with history and narrative potential, it just takes a bit to get it to start flowing onto the screen. Solving the more complex puzzles becomes incredibly satisfying, and the interactions between Nairi and the cast of characters the game has to offer do well to show her naivety as a sheltered young girl learning about the real world around her. It’s a game that offers a lot of small rewards and feel good moments. 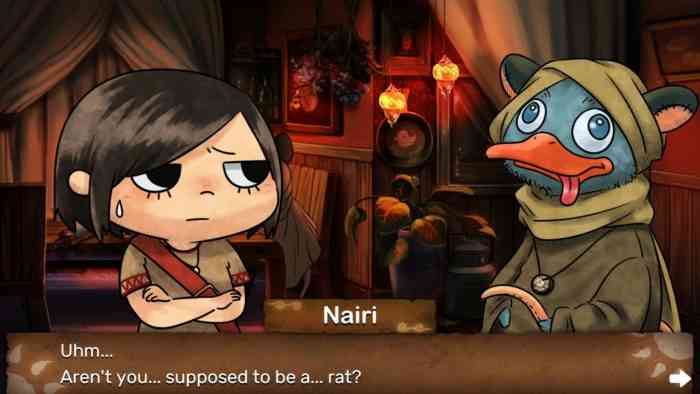 The game is presented in a hand-drawn art style that – coupled with the sometimes cheesy dialogue – feels like it’s been geared to a younger audience from the start. That isn’t to say it doesn’t look great, in fact, it reminds me much of classic Disney films like Aladdin, yet occasionally the characters do seem a bit unpolished. It’s refreshing to sit back with a thought-provoking title that isn’t about murder, blood, destruction, carnage, etc. It’s a feel-good narrative you can play with the kids or feel good letting them explore and figure things out. That being said, audio seems to be the biggest downfall for NAIRI.

Opting for a classic feel, dialogue is delivered strictly through text at the bottom of the screen. There is no voice acting of any kind present in the game which, while uncommon these days, isn’t the most detrimental aspect but often times the soundtrack to the game is negligible and even forgettable. When I think about playing the game there is no rhythm stuck in my head or indeed any thought to the audio the game may supply. Having a narrative-heavy title in which you need emotion to get invested means attacking the player on all fronts, and poor or absent audio has a seriously negative impact on the experience. 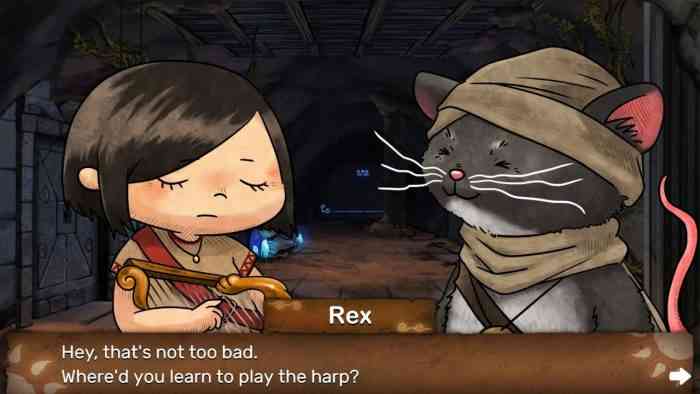 NAIRI: Tower of Shirin is a delightful and cozy point-and-click adventure you can feel good about letting your kids play. The puzzles are creative, the dialogue is a little childish but sweet, and the overall presentation is fairly pleasing. It does take a bit for the narrative to pick up but once it does you won’t want to stop playing, however, extended sessions with a soundtrack that is not memorable at best and a lack of voice acting can feel taxing as you stare silently at the screen. It’s an enjoyable experience that, with a few tweaks, would easily be a must-have for the casual gamer that wants to relax. 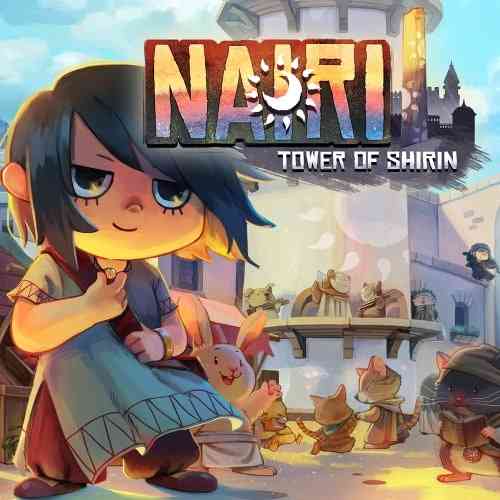