Monster Jam Steel Titans is an odd duck of a racer. It tries to offer up a quality monster truck simulation experience. It partially succeeds at this, offering races and trick sections, and excellent truck physics, but players will spend so much time crashing and propping themselves up, that that the races rarely gain enough momentum for them to be any fun.

The first issue I had with the game was that I found racing to be very unfun. This didn’t improve with the dozen or so hours I spent with the game. It’s very easy to roll over, and as a result the player has to be perfect with their controls. One wipeout likely means the race is over, and there’s no way to reset. Imagine playing Gran Turismo but every time a car made contact with anything else, it would automatically flip onto its back. The player will also quickly discover that a lot of long load screens lurk between the player’s crash and the beginning of their next race. I get that the game wants players to work through their crashes, in a realistic sense, instead of just resetting, but not being able to quickly restart becomes a tedious joysuck.

Trying out and doing tricks is a lot more fun. The player’s truck is so ready to roll over that it becomes fairly easy to pull off jumping flips and two tire wheelies. Stringing together combos of stunts can feel very satisfying, but it simply isn’t enough gameplay for more than an hour’s fun. Even the destroy as much as you can modes get old quick. There’s a lot of content of the surface of this game, but the individual modes lack the depth to give it any longevity. If Monster Jam Steel Titans had a mode where stunts were combined with racing to provide boosts, it would’ve created a much more sustainably fun experience. Alas, this game is trying to be a sim first, and the realistic tracks just aren’t varied, and don’t allow for a mix of racing and stunts. 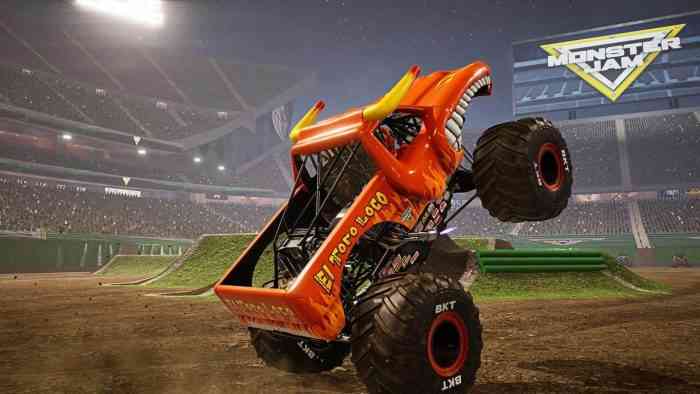 Although I will usually sing the praises of any game that provides a local multiplayer experience, which Monster Jam Steel Titans does, I was shocked to discover that there was no online play! This does make the game a better fit on the Switch, which comes ready to play with two players, but no online play is a serious no-no in 2019’s racing game world. The game does feature several different racing and derby modes to unlock, as well as a slew of vehicles, but for a monster truck sim, there isn’t any sort of the garage-based intense customization, that car aficionados would appreciate. This game was made for hardcore monster truck fans only. The kind of fans who want to know what it feels like to drive a monster truck. To that end the game succeeds, but it offers very limited customization options, for such a sim-playing game.

The graphics are a mixed bag. The trucks look great, but the environments are bland and poorly textured. There were times when I felt I was looking at N64 grass and trees. There were also a lot of pop-in textures. The music is a mix of rock and electronic music. Song titles popped up like the music was licensed, but there weren’t any songs or artists I knew. And it was all pretty generic. There was definitely a missed opportunity here for some country hard-rockin’ Creed or Nickelback. Monster Jam Steel Titans lacks the depth of a sim and the fun of an arcade racer. What we’re left with is a good concept, marred by a lack of fun. Realistic monster truck physics are unique to be sure. But what’s here is just so bland, and unfun that the end result will provide about as much playtime as a demo would. 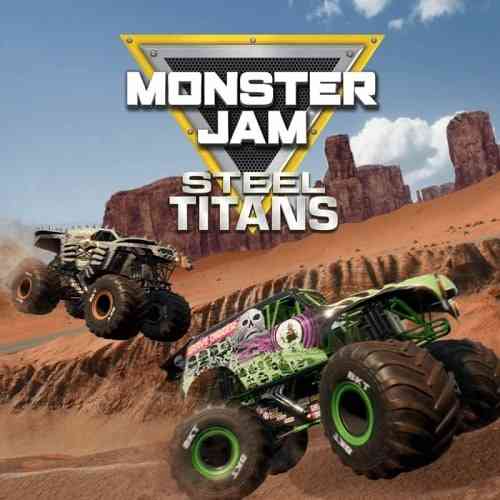