Moero Crystal H is bizarre. It is lighthearted, perverted, cliché, and obviously trying to provide as much fanservice as possible — and it works. The sexual nature of the game is more comedic than uncomfortable, and a fictional world where the land is protected by a set of underwear should be enough to convince you that this game cannot be taken too seriously. Let’s be real, nobody is picking up this game to dive into a complex plot and experience deep character development. No, we are here to fight alongside moe monster girls and to look at beautiful artwork. And with over 80 girls to recruit in this sexy dungeon crawler, there is a waifu for everyone.

All the Right Places

The plot is ridiculous but then again, most people are probably more interested in…something else. Basically, there are two articles of clothing that protect the world — the Bra of Darkness and the Panties of Light. If one gets separated from the other, it will trigger an apocalypse of sorts where the sky splits open and judgment comes upon the people. Yeah. You play as the “lucky pervert” named Zenox who encounters the Bra thief while looking for his missing father. As a convenient result, he is thrown into an adventure with a party of monster girls and a panty-hunting otter in order to locate the Bra of Darkness and to save the world.

As a dungeon crawler with turn-based battles and monsters that look like condoms and other sexual paraphernalia, Moero Crystal provides a decent game that’s not only about swooning girls and touching them. You also have to strategize a bit in terms of what equipment works best with which girl, and take into account their elemental affinities (think: Fire, Water, Air, and Earth) with the current team. Attacking monsters’ weak spots consecutively can result in Aura Combos and better item drops, and winning battles can unlock new skills and abilities. You are only allowed up to five active members in your party at one time (not including yourself), and you cannot swap members around easily, so you’ll have to think about who you want to bring with you prior to entering a dungeon. 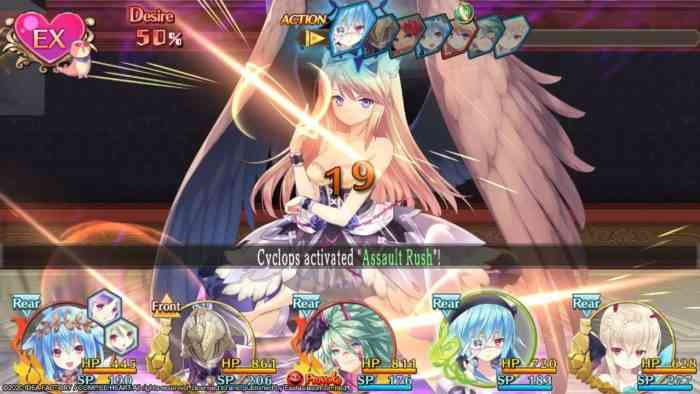 Despite being the main character, Zenox plays more of a supportive role and doesn’t do any of the fighting. While his party of monster girls do most of the heavy lifting, Zenox stands back to build up his “desires” which he uses to boost a team member’s power or to rearrange her battle lineup. His main role comes into play when they run into a girl possessed by the Dark Bra. If you wish to save and recruit her, Zenox has to rub her in the right places, literally. This means your party will have to focus on destroying her clothes so that she is almost naked, making it easier (I guess) for Zenox to locate all three of her sweet spots and rub them all within a set amount of time. The rubbing mechanics, which can be done via the Switch’s touch screen, successfully engages (and possibly excites) the player, but the HD rumble was a little deceiving as the vibrations were inconsistent and threw my rhythm off a few times.

Once you save a monster girl, you can immediately swap out a current party member and replace her with the new recruit. In order to rearrange your party again, you will have to regroup back in town which acts as your home base. You can always leave the dungeon via the way you came, or use an item to automatically bring you back. This item can be especially handy if you want to save the game, as save points are hard to find in dungeons. Home base not only allows you to reshuffle your party, but it also has an abundance of resources for you to use. You can upgrade your accessories, play mini-games to reveal special dungeons, purchase items, and even increase your intimacy levels with your girls — it has everything you want and need. 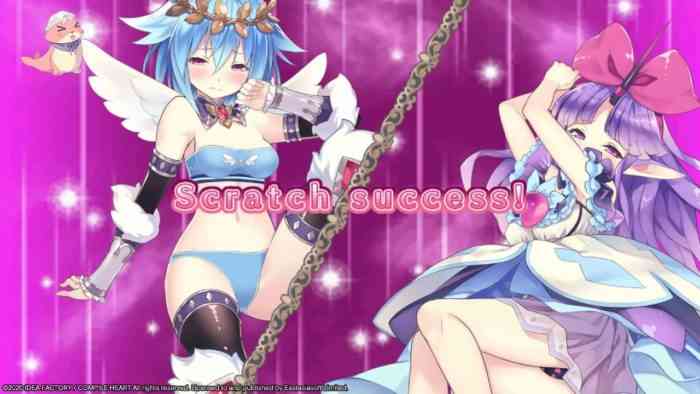 As you progress through the game, you will start picking up articles of clothing that your monster girl can change into. These are always rewarding because they provide new stats and abilities, and nine out of ten times they come in the form of skimpy underwear and ribbons that barely cover anything. It’s funny because female armour in games is always unnecessarily sexy, and this over-the-top representation of the stereotype made me chuckle. It’s also nice that the girls don’t seem to care that they’re bouncing around in their underwear, which can save the potential awkwardness of their unhelpful outfits.

Moero Crystal H is not the type of game you’d play without headphones on, but it also feels oddly liberating to play a game that welcomes nonsensical sexual themes with open arms. The fanservice is fantastic and the number of waifus you can pick are numerous. Everyone in this harem warms up to you and allows you to rub them, which truthfully makes it less uncomfortable to do. While it may not be a game for everyone, honestly if you are comfortable with a dungeon crawler mixed with lots of moe and sexual innuendos, this is 100% the game for you.