The Midnight Sanctuary, a new game released by Japanese developers CAVYHOUSE, is a 3-D visual novel that follows the tale of a visitor come to examine a small, Christian-Japanese village’s customs a little after the turn of the 20th century, coinciding with Japan’s push to modernization. When it comes to gameplay there is little to offer, but that’s a feature, not a bug, as watching the story play out is the purpose of a visual novel.

The visual half of the equation is definitely an important one. The Midnight Sanctuary is populated by many faceless villagers with colorful, ethereal 2-D designs taken, in some obscure way, from Christian lore, and they move and shift in disconcerting and intriguing ways with the 3-D models, especially when contrasted with the dark, nearly monotonous surroundings. While I enjoyed that aspect of the game, it feels like these were implemented to hide how basic the 3-D graphics were, and there were some character models that were so uncanny valley that it took me out of the game pretty much every time they were present.

I’m specifically thinking of the woman in the red kimono, whose hands appear as long eldritch horrors and skips as though she has cement blocks strapped to her feet. I wish this visual novel hadn’t ventured into 3-D territory and had stuck with artwork, because much of the game was difficult to visualize or enjoy because of the graphics, including a confusing climatic scene that was genuinely mystifying to me until the characters stood around and explained it to each other.

In God We Trust

The story should be the main draw of The Midnight Sanctuary, and it is, although considering that the only actions you take are deciding where to guide the new visitor in town first, that’s not saying too much. There isn’t much that can be said about this story without spoiling it, as it has some genuinely interesting and compelling twists and turns, but even the three-hour run time felt too long at times when I was just going from side street to side street talking to hooded figures about their village history. 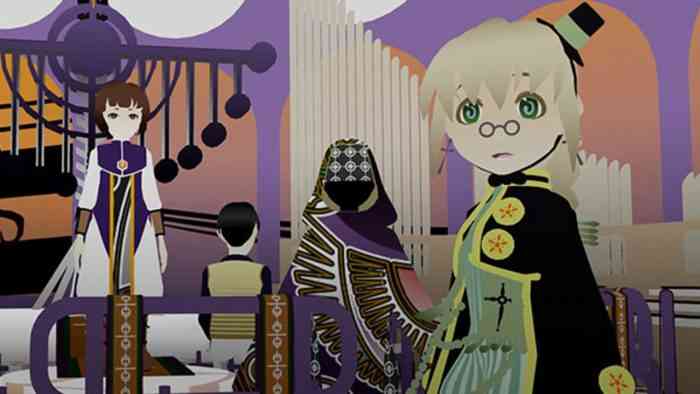 Japan has always had a fascination with Christian imagery, which The Midnight Sanctuary benefits from (if not exists as a direct result of), but unfortunately the game suffers from many of the same problems as other Japanese takes on Christianity—practically no research seems to have been conducted on the part of the development team, and so it feels like the game only dips its toes into the concepts mentioned. I do want to say that the story is genuinely interesting, especially in the last thirty minutes, and despite the Return of the King type false endings, the epilogue had me say “Oh no…” audibly and with real emotion. Speaking of real emotion, the voice acting, all in Japanese, is pretty fantastic throughout, even down to the snippets of workers singing.

For three hours of entertainment, I’m not sure The Midnight Sanctuary is worth the $9.99. However, it does present an increasingly entertaining story with surrealist visuals, so if that sounds like something you’d like, it might be worth checking out. For me, slogging through 3-D models that could have been traditional visual novel artwork for a story that only kicked into gear in the last thirty minutes just wasn’t how I wanted to spend my day. Still, that ending though, right?