Comics were always a big factor in my life.  I had quite a fondness for the Marvel Universe in particular, with its wide assortment of heroes and villains. Monthly, I would collect various comic books, watch the many animated shows, and even tried my hand at drawing some of the characters from that universe. What I did find lacking was a good videogame that portrayed my favorite characters. Sure, there have been some that have come close, but I really wanted to play as certain characters and not just some clone made out to look similar to them.  I wanted to feel the power of the Hulk smashing through enemies. I wanted to see the agility of the amazing Spiderman.  I wanted to see and experience the awesome tech of Iron Man.  Now a free-to-play MMO called Marvel Heroes promises to give us this and more.

Marvel Heroes is brought to you from Gazillion Entertainment, with the talents of David Brevik, who worked on Diablo and Diablo II, and the writing talent of Brian Michael Bendis from Marvel. The storyline involves power-hungry Doctor Doom, who’s trying to take over the universe wielding the Cosmic Cube. Your goal is to hunt him down and stop him at all costs, before it’s too late. Those familiar with the Diablo series will feel right at home as the game plays almost exactly like it. You are presented with the same isometric view, with point-and-click attacks, except visually the game features a Marvel theme. 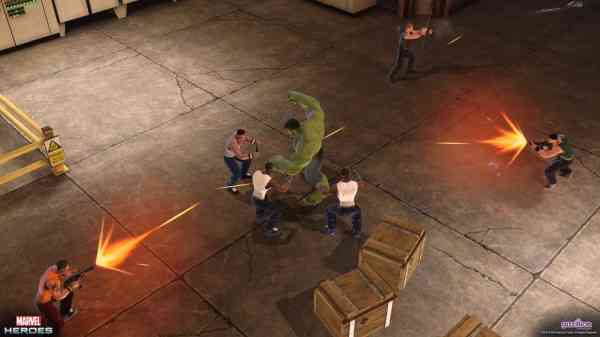 When you start the game, you are given the choice of five free characters (Black Widow, Daredevil, Hawkeye, Scarlet Witch, and The Thing). Many more characters can be found through gameplay, or by purchasing them via the in-game store. The characters range in price, although many are a little too high for my liking. For example, to unlock Spiderman it costs 2000 of in-game currency, which is $20 of real world money.  I know the model of free-to-play games relies on making income with in-game purchases, but I’m not sure who would be willing to spend that much for just one character.  Each character also has five different costumes that can be obtained in the same way (found or purchased). You can, however, buy costume packs and character packs, which does save you a bit but still seems rather pricey.

Regardless of the step prices, you gain more characters one way or another as the game progresses, and you are able to easily swap them out whenever you want. So you are able to choose what character works best for that situation, adding a nice element of strategy to the mix.  I did find this to come in handy, but you need to know your characters won’t level up without sinking much time into each. As your characters level up you will be gain points to use towards upgrades and learning new powers in their skill trees.  A simple interface allows to easily drag-and-drop new powers to keyboard shortcuts.

The game begins with your character in the first of three social hubs, the Avengers Tower. Here you will find NPCs that will hand out missions that will advance the storyline and optional side missions. There are the usual vendor NPC’s too that you can buy and sell the loot you find as you make your way through the game – trust me, there is plenty of it, and you’ll find your inventory will fill up fast. There are crafting NPCs as well which you can give elements dropped by enemies and turn them into health packs and such. You can also upgrade the crafting NPCs and other vendors by donating items to them.  Doing so will unlock new items to buy and craft as they level up.  So if you have a lot of low level stuff, it may be beneficial to donate it instead of selling them. 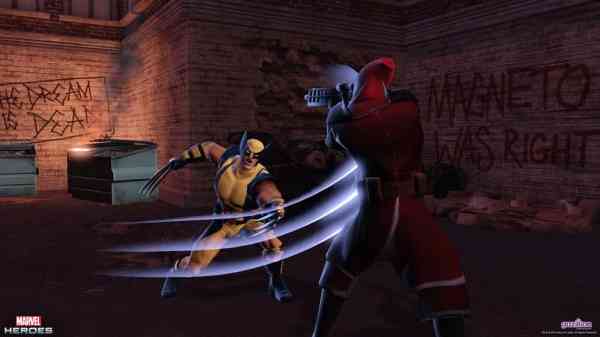 As you explore the social hub, you will come across “Daily Mission” terminals. There are two types of these terminals: green ones are all-access, and the red terminals require cosmic keys. These keys can be bought with in-game currency or sometimes found by defeating bosses. The red terminals will of course give better loot.  You can elect to solo these missions, or team up with others. Usually located near the Daily Mission terminals is another type of terminal that hands out “Survival Challenges” – there are four types in total right now.  Here you need to overcome waves of enemies, each wave becoming stronger, until you reach the end boss. Up to fifteen players can participate at once in a survival challenge, but some challenges only open up after a certain amount of time has passed. You have to first beat Dr. Doom to gain access to the first challenge; beat that, and you unlock the next. The last two challenges require cosmic keys to unlock them.

When you start exploring outside of the hubs, you will be slogging through huge maps, swarming with large groups of enemies, in order to reach mission goals.  The action can get rather hectic at times, especially if there are other players trying to achieve the same goal as you at the same time.  I did occasionally experience some major slow-downs when too much was happening at once.  It can also be confusing when you have several of the same character running around on the screen at the same time.

What I found took a bit of getting used to was when you enter some maps, you are automatically teamed up with others there. There was never more than five per team, though, and everyone got their fair share of loot.  Additionally, I did find it slightly annoying that I had to sometimes wait for certain mission objectives to respawn, so I could complete them. However, this is nothing new to people who play MMOs! 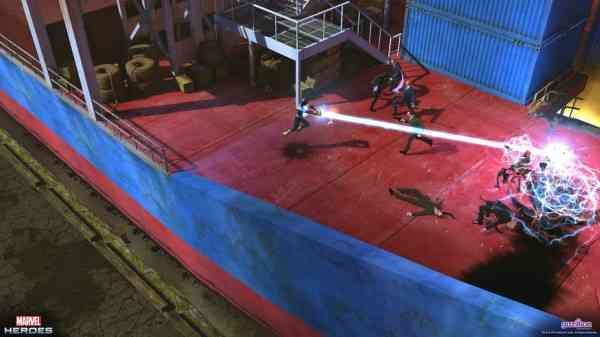 Visually, the game looks great.  Characters are well designed and the same goes for all the alternative costumes that you can find in the game. The powers your character uses look impressive, and feel powerful once they are upgraded.  The maps in the game are well laid-out, but some are absolutely huge, sometimes feeling almost too big. Unfortunately, although the levels, characters, and objects are great at first, I found after some time it became quite repetitive to look at.  I kept thinking to myself, “Didn’t I just fight through this area?”

Those who are really into the Marvel universe will enjoy the cut-scenes as they fill in the story between missions as you progress. They look similar to a flash-based comic and are fully voiced.  Curiously, though, the cut-scenes often show other characters who aren’t part of your team as if they were.  While you are battling through one area to the next you’ll be treated to plenty of “Blasts!”, “Zaps!”, “Whacks!” and “Pows!” emitted from your characters and everyone else who will be fighting around you. It’s almost overwhelming at times. The overall background score works really well with the environment and scenarios. Voice overs in the game are plentiful. All the major villains, NPC’s, and your current playable character will chat away from time to time.  However, it doesn’t always fit well.  For example, it was odd when my character would come out with a statement as if he were talking to another superhero who is nowhere in sight.

When you consider it is a free-to-play MMO game, Marvel Heroes is a fun romp for any fan. This being said, the game does not bring anything incredibly innovative to the table and the price tag for some of those playable characters is a bit steep.  In the end, I recommend you check out the game but just make sure you know what you are getting into before you soak some of your funds into the game.