Mario + Rabbids Kingdom Battle Review – The Best of Both Worlds

Partnerships between major game developers are rare. Sure, you might see characters from different companies making cameos in someone else’s game. Solid Snake showing up in Smash Bros, for example. It’s a lovely surprise, but there weren’t any stealth sections or enormous labyrinthine narratives in Smash Bros. Mario + Rabbids Kingdom Battle is different. While Ubisoft is the official publisher and developer, this game is Nintendo all the way down to its bricks. Mario and the Rabbids come together in a way that feels so natural, you’ll wonder why on earth this didn’t happen sooner.

The narrative kicks off with an inventor creating the premise in her bedroom. Take two great things, add a little science and bam! A brand new, much cooler, hybrid is born. Look, we don’t need a lot of backstory to justify this game. This is vodka and orange juice, it’s ice cream and sprinkles, it’s wine and roses. Two great tastes that go together just right.

Rabbids are more or less the perfect 21st-century mascot. They’re creative, easily-distracted and deeply self-absorbed. I hate to compare these guys to minions, but I just did. Like their soulless yellow counterparts, the Rabbids absolutely steal the show whenever they’re on screen. Rabbid Peach has a reckless fascination with selfies that somehow never gets old. Rabbid Kong is an aggravating boss battle that I want to play repeatedly, just because he’s such a delight. Mario and company still hold their usual timeless charm, but they feel a bit subdued compared to the Rabbids, a lunatic swarm of ADHD golems brought to life. The trade-off being that the Mario half of your team has much cooler abilities. This is more of an opinion than a fact, but I stand by it. Mario, Luigi and Peach all have this sight ability that gives you an extra attack during the enemy’s turn, assuming they cross your field of vision. If two of your units trigger this ability at once, you can knock an overpowered foe right off the level. This doesn’t happen often, but those magic moments feel like art in motion.

“Rabbid Peach has a reckless fascination with selfies that somehow never gets old.”

There’s a ton of charm crammed into every second of this game. The world maps are a sloppy explosion of pipes and platforms like the art directors survived a head-on collision with their sketchbooks in their laps. The Nintendo Polish is strong here as well. Every texture is so beautiful as to be tactile. I wanted to reach out and run my fingers over some of these stages. There are only four worlds to visit throughout the campaign, but the developers compensated by making each one unique. I can’t say enough about these world maps. Not only do they look gorgeous, but they naturally integrate the battle and exploration sections. They also feel reminiscent of the Mario world maps from my childhood. I don’t mean that this is what they looked like, rather that this is how I imagined they should look. These are set pieces, perfect constructs that take the old bit-based design bible and blow it up into breathtaking tones and perfect textures. The legendary Nintendo Polish blends with that signature Rabbids insanity to make a new world, one wholly suffused with childlike energy and wonder.

Combat is fast paced. The chance to hit system is a simple 100/50/0 breakdown that changes depending on an enemy’s cover level. Unprotected units get annihilated immediately.  You want to live, you have to cower and crouch and hide. Every unit has a wide variety of possible moves, minimizing your time waiting for cool downs to complete. The line of sight is a critical component that mostly feels natural. There were a couple of moments where I didn’t understand how a shot couldn’t possibly connect. You can see the guy, you aren’t that far away from him, why shouldn’t it work? But these moments are rare. Every skill feels useful and you’re going to want to use them all in order to survive. To that end, you’re able to swap team and skill loadouts with refreshing ease. Whereas some tactics games will lock you into a single upgrade path, you’ve none of those restrictions here. If a team or upgrade tree isn’t doing you any favours, you can change it. Weapons come with different super effects, adding another layer of customization to your strategy. Ink blocks a unit’s direct attacks for one turn, freeze takes away their secondary moves, honey locks them in place and bounce sends them careening around the battlefield. If you’re ever stuck on a stage, it’s nice to know that there’s a host of other ways to approach it.

Okay, so maybe I’ve been irreparably spoiled by the Disgaea series, but I want the ability to cancel a move action after it’s been made. I recognize that certain elements of unit behaviour preclude this possibility. Moving means dashing and jumping after all, and these actions can change the layout of the enemy and yourself. It would just be so nice to be able to set up attacks with a bit more precision. At first this mechanic made no sense to me, but I’ve come to realize just how treacherous the act of movement can be. That badass sight ability I buttered up earlier is one your enemies can also use. This adds a whole new layer of tension to fights, where you can be slow-motion sniped just running between pieces of cover.

“With every successive stage the potential dangers grow, and new ones are always being added to the pile.”

On that note, let’s really take a moment to appreciate how tense these battles get in spite of the whimsical setting. As if it wasn’t scary enough cowering behind a stack of bricks, some objects can be destroyed by errant cannon blasts. If there’s five enemies attacking this turn and the second one blows up your hiding spot, you’re goosed. The last three will take turns pounding you into the dirt until you pass out. Other blocks will be stuffed with super effects that activate once they’re destroyed. By the time you get to world two, finding cover that won’t kill you is a little harder. With every successive stage, the potential dangers grow, and new ones are always being added to the pile. The further along you go, the more skilled the enemies get. Suddenly they’re healing each other, blinding you, using the dash attack and blowing up your cover. There’s never more than a moment to catch your breath, but it doesn’t ever feel unfairly hard. However, my opinion on the difficulty is informed by my relative lack of experience playing turn-based tactics games. Your mileage may vary.

Maybe this game doesn’t look like chocolate and peanut butter at first glance. Perhaps the Rabbids seem too spastic, or the genre doesn’t interest you much. Maybe you’re worried you’d be buying a children’s game. Put all of that out of your head. This is a fast-paced tactics adventure with a deep combat system and a charming cast of characters. Beyond the regular campaign, there’s challenges to master, perfect scores to wrap up and collectibles to hunt down. Every level represents a puzzle with multiple solutions. The presentation is an absolute delight, and the play style is perfectly suited to the Switch. If you’ve any interest in turn-based tactics, Nintendo or Ubisoft games, Mario + Rabbids Kingdom Battle is a slam dunk. 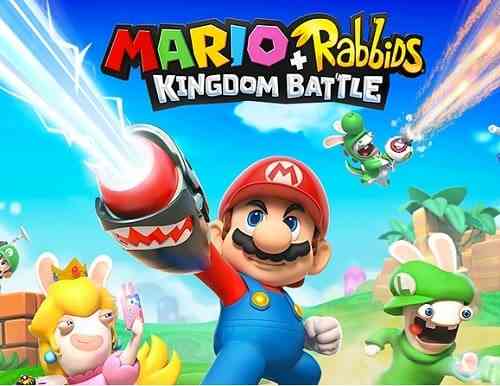